On Tuesday morning, President Trump took to Twitter to spread absurd disinformation about the current state of the latest round of COVID-19 relief talks, which have abruptly stalled in the face of callous Republican obstruction and for which there is now almost “no hope” of a deal.

Since returning from recess, Senate Republicans tried to pass a bare-bones $300 billion relief bill that would have provided $300 in enhanced weekly enhanced unemployment benefits, small business relief, and expanded coronavirus testing. But Democrats rejected the bill over the Republican refusal to include to provide any money for states and cities, who are desperately trying to avoid mass layoffs as the pandemic depletes their tax revenue.

Senate Majority Leader Mitch McConnell (R-KY) and Donald Trump have been working overtime to try and falsely paint this issue as one only affecting cities and states run by Democrats, calling it a “blue bailout” and blaming Democrats for poor governance and management while completely ignoring how their appalling mismanagement of the pandemic has resulted in nationwide economic chaos.

Trump falsely claimed that Democrats were only interested in helping blue states and that Republican states are “great,” which they certainly are not.

The Democrats are only interested in BAILING OUT their badly managed, high crime, Blue States. They are not interested in our workers or small businesses. Crazy Nancy will only do stimulus, which would be helpful, if we couple it with bailout money. Republican States are great!!!

“This is not a partisan issue,” said Lee Saunders, the president of the American Federation of State, County and Municipal Employees, to Slate back in April. “This is not a red or blue issue. This is an issue about providing essential services to the people that rely upon them — and that’s the entire country.”

Moodys’ Analytics makes it clear that both red and blue states will suffer equally if Republicans don’t lift a finger to help. 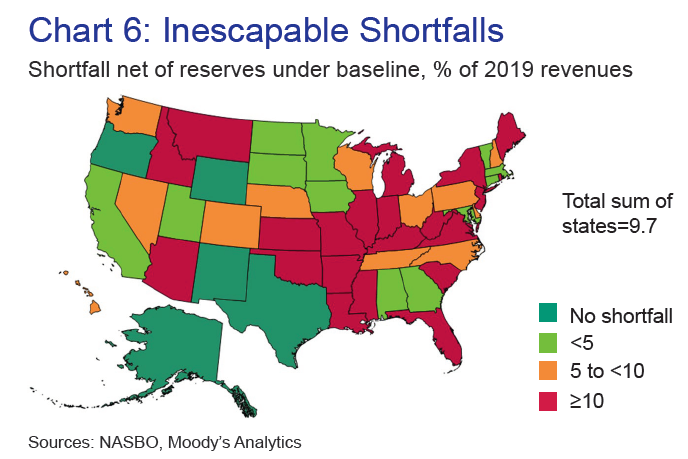 Mitch McConnell has made it painfully clear he would rather let the states go bankrupt than lift a finger to help keep our nation’s economy from sliding into a depression, suddenly deeply concerned about fiscal responsibility now that his wealthy patrons have gotten trillions of taxpayer dollars for their bailouts.

The truth of the matter is that Trump and McConnell don’t care about the American people and never did.

Democrats are demanding bailout money for every state because they care about people. The coronavirus crisis that Donald Trump and his Republican allies have enabled has taken a sledgehammer to the budgets of blue and red state alike, and by refusing to pass relief for the states, Trump and McConnell are going to cause the layoffs of thousands and thousands of their own voters, just as they’ve caused their unemployment benefits to dry up and their family members to fall sick and die.

Proposing the spending of tax dollars back on the public is literally the most basic display of “caring” that politicians can do. This legislation would be downright transformative in the lives of some people, keeping roofs above their heads and food on the table for their children — but since it doesn’t benefit the megawealthy, Trump and McConnell have no interest in any of it.

The politicization of state and city government bailouts is a new low in nihilistic cruelty by a political party that has gleefully discarded all semblance of rationality and empathy in favor of greed and bigotry. The coronavirus crisis is projected to blow a half-trillion-dollar hole in the budgets of America’s 50 states. If the states are not bailed out, the shortfall is likely to trigger crushing austerity, massive job losses, and an abrupt end to critical public services that could push our economy into years of recession or even a great depression to rival the 1929 crash.

To put it bluntly; the Republicans are willing to tank the nation’s entire economy just to avoid having to spend a dollar that might help a Democrat.