You can expect Donald Trump to start ranting about how social media companies are so unfair to conservatives any minute now.

That’s the logical conclusion after the content chiefs at Twitter decided that the president’s tweet this morning claiming that he’s now immune to COVID-19 and can no longer infect anyone else “violated the Twitter Rules about spreading misleading and potentially harmful information related to COVID-19,” as the warning label now hiding his prohibited tweet now proclaims.

Unlike the rest of us mere mortals, the president suffered neither a suspension from the social media platform nor even deletion of the offending post because the powers that be at Twitter “determined that it may be in the public’s interest for the Tweet to remain accessible,” as they presumably wanted the public to be able to view the evidence of his platform crime. 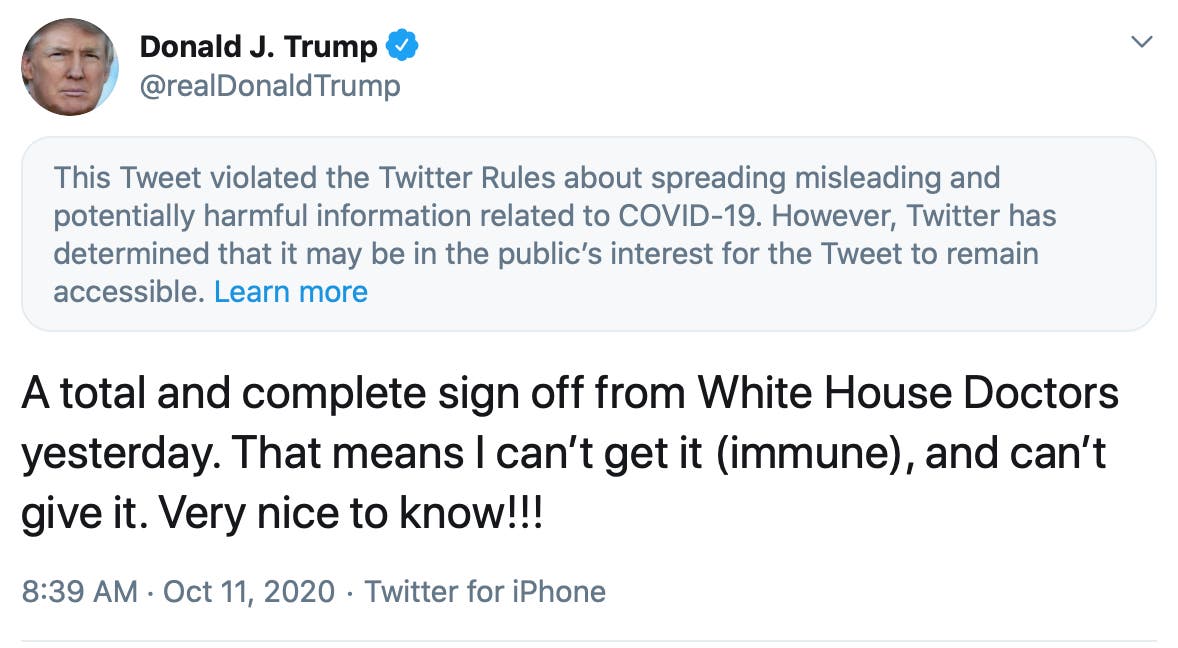 The rebuke did not stop the president from continuing to post on Twitter throughout the rest of the day, so he continued to post maliciously false information that because it wasn’t specifically about COVID-19, was allowed to remain on the site without any disclaimers as he preceded to pursue polluting the social discourse with the strangely allowed political misinformation.

He followed his forbidden tweet with a fiction about the condition of several urban areas during the Obama/Biden administration.

People don’t remember the chaos, hatred & discord that we all went through during the 8 years of Obama/Biden. St. Louis, Oakland, Baltimore, and so many other places, were a complete & total disaster. I wouldn’t be in the beautiful White House if it weren’t for Sleepy Joe, etc.

And soon he won’t be in the beautiful White House because of Joe Biden, who, even at his sleepiest, still is enormously more qualified to occupy that presidential residence.

Trump’s desperation as poll after poll shows him trailing Biden by double digits in the presidential race was palpable in his final tweet of the day so far.

Biden evades “Court Packing” question. @FoxNews Because his puppet masters are willing to destroy the U.S. Supreme Court. Don’t let this, and so many other really bad things, happen. VOTE!

The only court-packing that’s taken place so far is entirely the responsibility of Senate Majority Leader Mitch McConnell (R-KY) who refused to even hold a hearing for Barack Obama’s nominee in his last year in office and refused to confirm a record number of judicial appointments during the Obama administration allowing Trump to fill the lower courts with an unprecedented number of right-wing idealogues during the past years with swift Senate confirmations.

The only bad thing we need to prevent is another four years with this malignant narcissist in power.

Vote a straight Democratic ticket to elect the Biden/Harris ticket and return the Senate to Democratic control to bring America back to a semblance of normalcy and begin our recovery from the Trump administration’s disastrous handling of the coronavirus pandemic and the economic meltdown that it has caused.

Just imagine a future Sunday where Trump’s tweets are no longer considered newsworthy. Sounds like paradise, doesn’t it?