One of Donald Trump’s more perplexing posts over the past few days of his denying the reality of his electoral loss was this seemingly innocuous tweet from yesterday.

Most people assumed that the press conference was taking place at the Philadelphia branch of the ritzy Four Seasons hotel chain until Trump quickly followed up his initial post with a couple of clarifications. 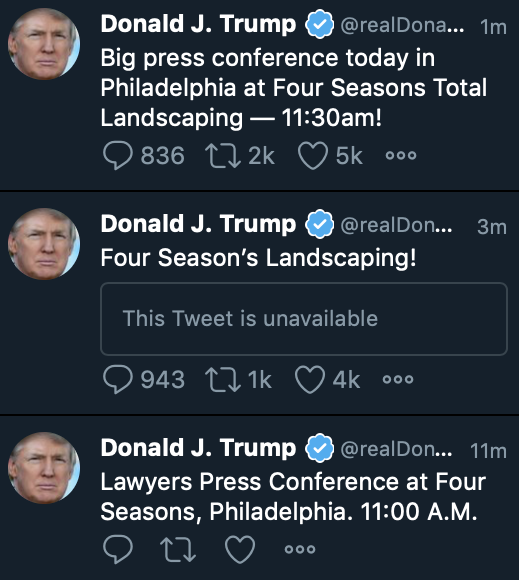 The corrected location information didn’t really do much to clear up the confusion and forced the proprietors of the upscale hotel to issue their own post to try to clarify that they had nothing to do with the sore loser media event that Rudy Giuliani was planning in the City of Brotherly Love.

While the hotel managed to help let people know that the press conference wasn’t taking place at their premises, it didn’t do much to explain why the Trump campaign was holding an event at a landscape gardening emporium in an environment considerably less glitzy than a four-star hotel.

Some people speculated that the choice of this location was due to a case of mistaken identity that was too late to correct.

Journalists arriving on the scene found the president’s minions trying to figure out how to rearrange the company’s landscaping equipment to accommodate the anticipated crowds for the press conference.

Security staff are guarding the gate but beyond it I have spotted @CLewandowski_, Mr Trump’s 2016 campaign manager & @PamBondi, Florida’s former Attorney-General + Trump loyalist discussing the rearranging of landscaping equipment in preparation for their news conference. pic.twitter.com/rXu70Zm3HN

The reason for choosing a location outside the main city center of Philadelphia became clearer during Rudy Giuliani’s recitation of alleged election irregularities that were interrupted with the news that most major news organizations had just called the section for Joe Biden.

Here is the full report of an unusual #Giuliani news conference: https://t.co/Z6UEQskIG8

It’s certainly interesting to see a British media perspective on America’s election follies at the end of the Trump era.

Meanwhile, the folks at Four Seasons Total Landscaping were today attempting to try to cash in on the unexpected publicity by launching a merchandising effort to sell T-shirts to the disgruntled Trump supporters who might be the only receptive market for such swag, while trying to simultaneously claim a bipartisan stance.

The world may be moving on from the increasingly desperate cries of election fraud still being proffered by the president and his disappointed followers, but capitalism — and entrepreneurship — marches on.

In a hundred years, perhaps a Four Seasons Total Landscaping T-shirt will be as much of a historical artifact as a Custer’s Last Stand hoodie.

From the benefit of hindsight, future Americans can look back on the 2020 election without the sense of anxiety and urgency that present-day citizens have endured and be able to see the humor in the political ephemera that this fateful decision engendered.