With the end of his presidency rapidly approaching, Donald Trump is reverting more and more to his true form: that of a glorified internet troll. Unable to overturn the election in a soft coup due to the laughably weak cases his attorneys have brought to court, he’s reduced to sporadically blasting out tweets to falsely claim that he actually won and that President-elect Joe Biden benefited from mass voter fraud. More and more he is a creature that exists solely in the digital space, offering perhaps a glimpse at what his cretinous post-presidency will look like.

The COVID-19 pandemic is still raging with cases on the rise across the country, but Trump decided the best use of his time today was not addressing the crisis but rather whining once again about social media. He urged House Republicans to vote against the National Defense Authorization Act, calling it “very weak” because he wants it to also include a repeal of Section 230, the statute that shields social media giants like Twitter and Facebook from legal liability for the content posted on their websites. It also gives them near unlimited leeway to police their platforms and decide what to delete or keep up.

Lately, Trump has been threatening to use his veto power over the roughly $740 billion military budget unless 230 is addressed.  He and other Republicans believe or at least pretend to believe that social media companies are violating the rights of conservatives and unfairly suppressing their opinions on their websites. The allegations are unproven and conveniently overlook the fact that many right-wingers are often banned or censored on social media for violating the relevant terms of services—for reasons ranging from the posting of Nazi memes to targeted harassment to the spreading of blatant misinformation

There is perhaps nothing more Trumpian than being willing to endanger America’s national security over some petty social media issue. The man is nothing more than a bloated ego housed in human form. He long ago made it abundantly clear that he has little respect for our service members and even less respect for the United States.

Trump also tacked in some complaints about “National Monuments,” which is really just a coded defense of Confederate statutes, urged for the allowance of 5G and “troupe reductions in foreign lands.” While we know that this president doesn’t read his daily briefings and likely has little real idea of what’s going on in the Middle East, at a bare minimum he should know that we don’t have “troupes” of circus clowns deployed overseas. We have troops.

Trump deleted the tweet with the typo and sent out another one with the correct spelling but by now he should realize screenshots last forever. It seems he’s determined to embarrass himself right up until the moment he’s escorted out of the White House for good. 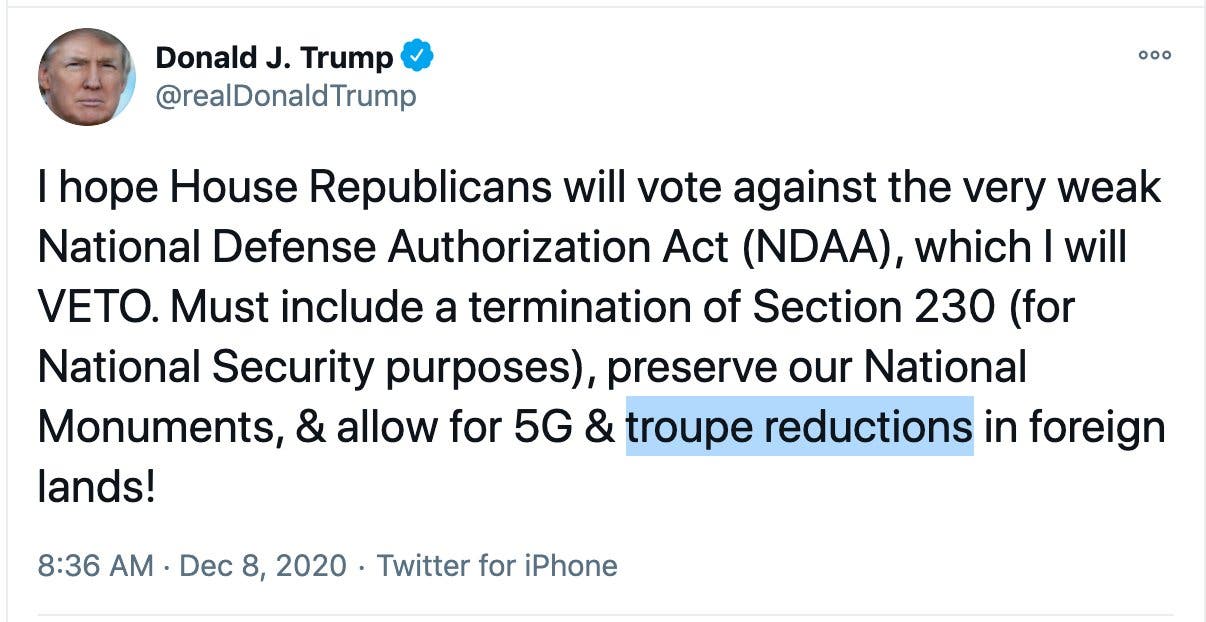 I hope House Republicans will vote against the very weak National Defense Authorization Act (NDAA), which I will VETO. Must include a termination of Section 230 (for National Security purposes), preserve our National Monuments, & allow for 5G & troop reductions in foreign lands!

As usual, Twitter was more than happy to mock the president’s mistake and generally rain well-deserved abuse down on him.

we all saw you spell it "troupe," Einstein

Sorry, your first try at this was more notable, 'troupe reductions in foreign lands'! I was on the fucking floor!!! Hahahahaha Troupe: a group of dancers, actors, or other entertainers who tour to different venues.
"a dance troupe"

The US is the world's oldest continuous democracy, but Trump wants to in effect end that. He's ignoring Biden's 306 electoral votes & victory in the popular vote

With his baseless claims of fraud, he is pressing state lawmakers to overturn our democratic elections—UNCONSCIONABLE

You already did this one today…slow day over there so you’re already on repeat mode? pic.twitter.com/n3MKWeoPRn