I doubt that this was what Donald Trump had in mind when — pressed by Fox News moderator Chris Wallace at the first presidential debate to denounce white supremacy — he told the Proud Boys to “stand back and stand by.”

While joining other deluded Trump supporters in Washington DC yesterday to protest the presidential election as somehow stolen from the man who presided over the greatest loss of American lives in a century, a group of Proud Boys dressed in manly kilts decided to make a unique display of their sentiments about the anti-fascist protestors loosely thrown together under the banner of Antifa.

As they lifted their flouncy kilts and bent over, their naked posteriors were exposed, revealing that they had gotten close enough to each others’ buttholes to draw letters on their pals’ cheeks to spell out “Fuck Antifa.”

So many jokes, indeed.

Hopefully, no one had a bean dinner before the stenciling of letters commenced.

Their stunt may have impressed the demonstrators who came to Washington DC to support the wholesale disenfranchisement of their fellow American citizens and the destruction of democracy as per their orange-hued master’s encouragement, but the denizens lurking in the Twitter comments section made the exhibitionist Proud Boys the butt of many an incredulous quip (if you’ll pardon the pun.)

I can't believe that was filmed–and that I watched it.

I keep laughing at the thought of them writing on each other’s asses. They were all fighting about who gets to do Billy Bob. #ProudBoysGay @GeorgeTakei

It’s actually a really cool company that makes real kilts and cosplay stuff from medieval times and gothic stuff. They were on twitter earlier bitching that the Proud Boys bought their stuff. They figured out what they spent and rounded it up to donate $1k to the ACLU.

Big fan of Verillas, they have always been strong allies, love to see this

Give us more than a few minutes. We have to write “letters” on each other’s bums pic.twitter.com/1OfPpX4ClP

I am telling you, a lot of these guys are likely closeted gay people and they would be so much happier if they just came out and embraced who they are. So much of this angst is coming from their repression.

Imagine your father travelling to DC to do this 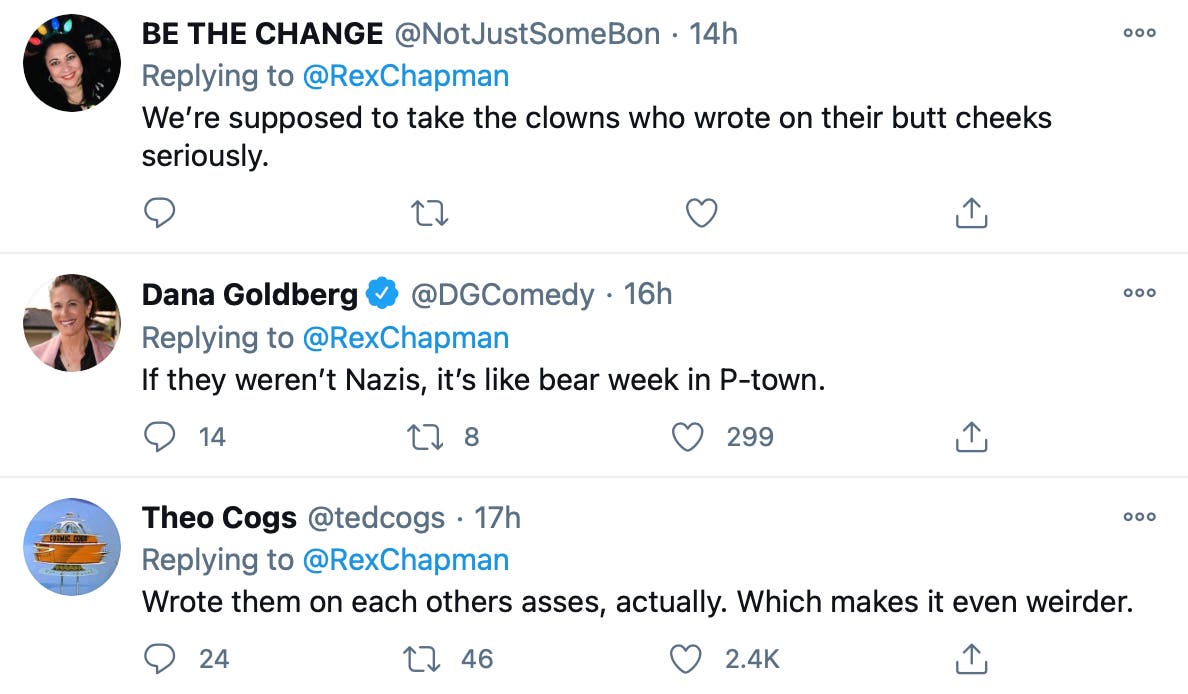 Many commentators focused on the cognitive dissonance between the anti-LGBTQ sentiments normally displayed by right-wing extremists and the Scottish drag worn by the men here, often venturing into implicit homophobia in their response to the Proud Boys’ antics.

While the group should be commended for breaking gender stereotypes with their pants-free display, the subsequent behavior of other members in their organization on a night when Washington DC descended into violent skirmishes between the Trump supporters and counter-protestors — and one man was arrested for stabbing four people — leaves little residual goodwill left for these violence-prone gang members.

Now is not the time to skirt the issues or bare one’s naked prejudices. Ultimately, the Proud Boys are no better than the Salvadoran MS-13 gang of violent criminals, and the stories of their exploits suggest breaking wind more than breaking news.

They and the other seditious actors who are trying to overthrow the results of an election deemed free and fair by all independent observers and by the many judges who have examined the evidence-free claims of Donald Trump’s crack legal team — or crack-head legal team, if one must judge then by their performance — need to be held accountable for their attacks on Democracy.

At the very least, force these Proud Boys to wear those kilts all winter long without stockings or any other insulating material. That would be the least punishment that they deserve for their treasonous behavior.