Ivanka Trump seems to believe that she can turn around the wide public sentiment that her father’s presidency was the worst in U.S. history with a few promotional tweets.

Unlike her father, the eldest of Donald Trump’s daughters still has access to the social media platform that banned her father after he continued to post inflammatory messages in the wake of the insurrection that his rabble-rousing inspired among his deranged followers.

Ivanka tried to rehabilitate the reputation of the Trump administration that she played a significant role in as one of her father’s closest advisors by focusing on the positive aspects of his presidency, no matter how little Donald Trump had to do with advocating for and implementing the policies that she was touting, such as the Paid Family Leave legislation.

Twitter users predictably responded to the first daughter’s familial boosterism with derision and outrage and gave their own summaries of the legacy of the president whom they decisively voted out of office.

Ivanka- let’s make this simple for you. You can’t put lipstick on a pig. The “presidency” and the administration of 45 will go down in history as a massive dumpster fire. That is your legacy. Enjoy.

Facts!! The world wasn’t laughing at the US before 2016 but once your daddy took office they all laughed because they all knew he was incompetent and like everything else he touches he destroy’s. Riches to Rags is what I pray for the Trumps.

It seems the entire administration has forgotten about them. Their god loving Christian followers seem to not care either!

And this law is for federal employees only, not all Americans.

Don't forget his 325 days on the golf course, making already cash strapped taxpayers (those who pay what they owe, unlike the 'billionaire' who paid $750), pay his businesses for him to play golf. 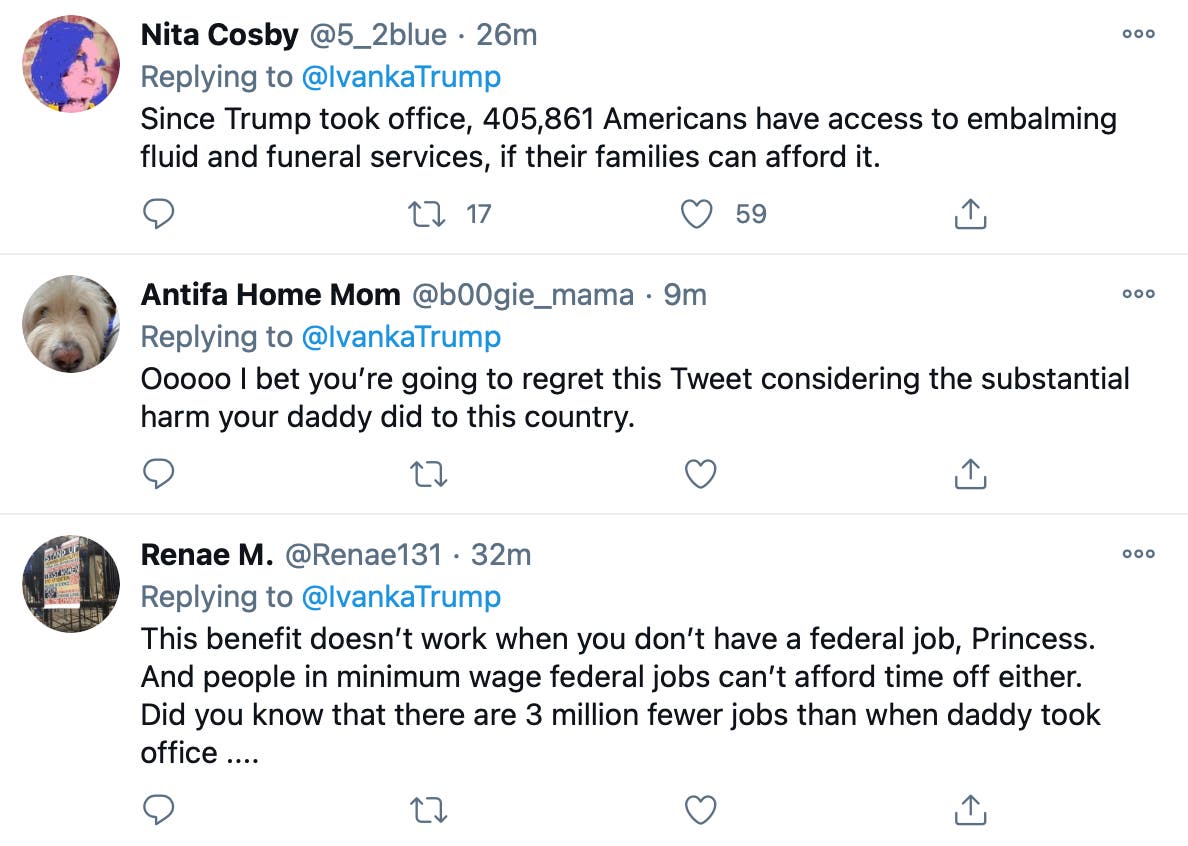 None of this bodes well for Ivanka’s reported future political ambitions, much less for the results of her father’s upcoming unprecedented second impeachment trial.

It seems as if the first daughter has descended into a delusionary rejection of reality as deep as the one that her father dwells within.

Let’s be happy that, once Wednesday arrives, her influence within the White House will be as negligible as the relationship of her claims about her father’s accomplishments to objective reality.