The partisan pettiness of a supposed “news” channel never ceases to amaze older viewers who grew up in the days of the Fairness Doctrine which required broadcast channels to provide equal time to all sides of a contentious public debate without favoring one side or the other.

Those golden days of equanimity in opinion ended during the presidency of Ronald Reagan when just about everything that America had done right since the 1960s was reversed by right-wing ideologues.

Today, we find ourselves having to endure the ridiculous rants of vapid and self-serving talking heads with malicious intent on Fox News, OAN, and Newsmax.

Among the worst offenders in peddling partisan diatribes is Fox News’ Tucker Carlson, a man best described by replacing the initial letter of his first name with the sixth letter of the alphabet.

Matthew Gertz, a senior fellow at the progressive media watchdog group Media Matters For America, called out the Fox News primetime host for disseminating his despicable right-wing biases to the nation as he tries to slander incoming appointees in the new Biden administration, a laughable task given the warren of swamp monsters that populated the previous Trump administration.

Tucker Carlson is the shittiest snob on television, there's nothing he loves more than sneering at the credentials of women.. Here he is talking up how the new State deputy spokesperson spent a season as an NFL cheerleader in 2012. pic.twitter.com/lk9dtluuE6

Add your name to demand the Senate CONVICT DONALD TRUMP for inciting an insurrection agains the United States!

Apparently, there are many people who agree with Mr. Gertz’s assessment of the white-supremacist sympathizer who gets to purvey his hate-mongering nightly on Fox News.

Exactly like the critique of AOC for being a bartender. PS – the previous admin recruited many folks from TV, so there's that.

Tucker, having never had to work to get a job, can only sneer people who do.

Could it be possible to have the estimated net worth of these people shown any time they're on screen? Could hit differently if Mr. Everyman's Swansson fortune was right there when he goes on his rants, or when billionaires go cry about Gamestop stock on MSNBC etc.

Lol. He’s such a teeny pr$ck

Plus the part where it's dangerous, there's no protective gear and injuries from throws and lifts are a daily occurrence. The massive body image issues, pressure and constant bodyshaming are no joke, either.

Misogyny is a hell of a drug. 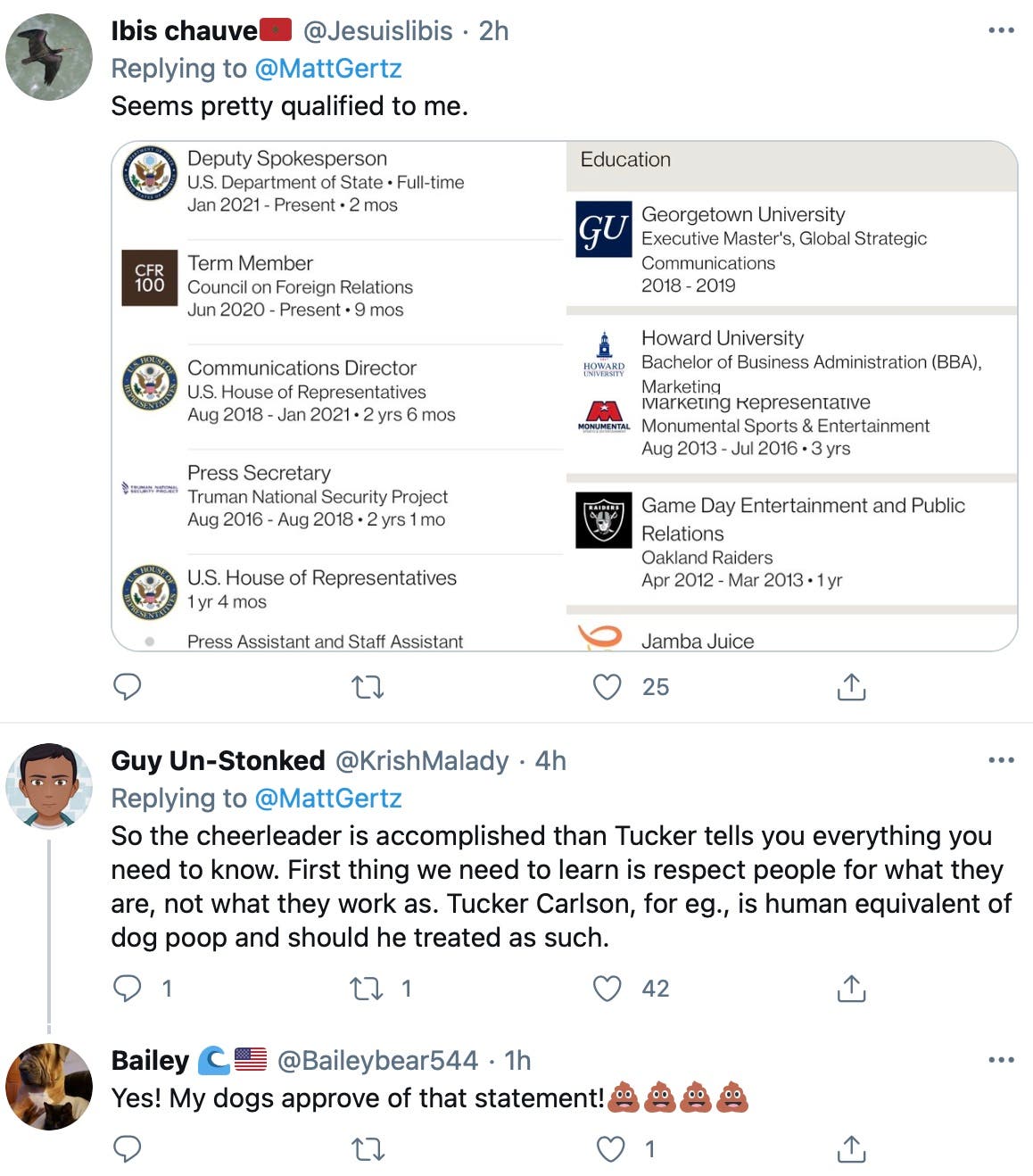 Perhaps the Biden administration can contemplate a return to mandating that every media outlet be required to present equal response time to opposing points of view.

A return to a free marketplace of competing ideas — rather than protected media silos that breed divisiveness — can help rid the nation of the scourge of people like Tucker Carlson poisoning the discourse.

And that can only be a good thing.