The congresswoman who brought QAnon conspiracy theories into the halls of the House of Representatives is facing even more derision after she appeared to threaten a fellow GOP representative today.

Representative Marjorie Taylor Greene (R-GA) took to Twitter this morning to issue what many readers saw as a not so subtle intimidation tactic against Congresswoman Jaime Herrera Beutler (R-WA) who revealed yesterday that she was told by House Minority Leader Kevin McCarthy (R-CA) that Trump had sided with the unruly mob attacking the Capitol when he had called him seeking help during the insurrection.

Between Greene’s description of Trump as “innocent” — a judgment that one is hard-pressed to reach after hearing the detailed timeline of the riot that the Democratic impeachment managers presented — and her implied characterization of her Republican colleague’s revelation of such crucial evidence as a betrayal and snitching, her invocation of Trump’s “loyal 75 million” — conveniently rounded up and still less than the over 81 million people who voted for Joe Biden — read to many as a threat against her fellow party member in a GOP caucus that has been rent asunder by the impeachment trial.

This is borderline witness intimidation.

Her rhetoric fans the flames . She must be expelled

If we know anything, it’s that the Trump base has elements that are unhinged and dangerous domestic terrorists. MTG’s statement has no place coming out of the mouth of a sitting US Representative, and she should withdraw it or face further official sanction.

I think some 'bad things' are going to happen to her. 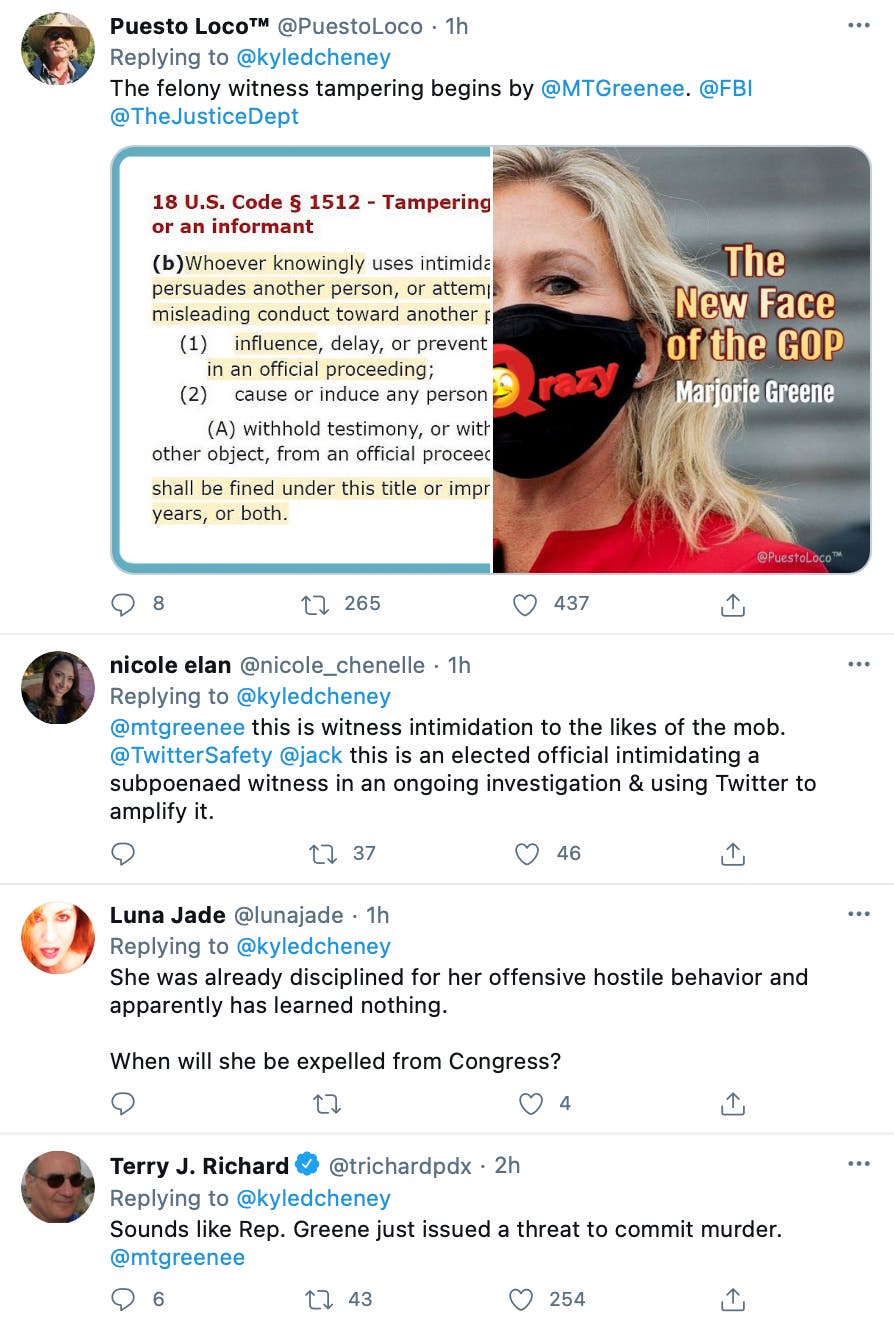 With Greene having already been stripped of her committee assignments in the House of Representatives because of her social media posts endorsing the execution of prominent Democrats, it’s unclear what further sanctions she could face in Congress beyond her complete expulsion from that body.

Hopefully, that will be a step taken by the House as soon as possible as Greene’s continued presence in Congress at this point is an affront to civilized American society.

Marjorie Taylor Greene may not realize it, but it is her own deranged and threatening behavior that is “the gift that keeps on giving to the Democrats.”