Donald Trump Jr. shows off his gun collection in his latest video and Twitter blasts away

Lost in the rambunctious public discourse over Sen. Ted Cruz’s secret getaway to Mexico and whether or not it was acceptable to disparage the character of Rush Limbaugh on the day that he died (it is, the world is a better place now) was former Trump lawyer and ex-New York mayor Rudy Giuliani sharing a grotesquely lewd story about the time Limbaugh and Giuliani had leered at a woman bending over at a charity golf tournament.

While on former Trump strategist Steve Bannon’s “War Room” podcast, the repulsive old lich excitedly recounted how “on the green is Michelle Wie and she’s getting ready to putt…Now, Michelle Wie is gorgeous. She’s 6ft [tall] and she has a strange putting stance…She bends all the way over and her panties show. And the press was going crazy!”

It was so inappropriate and gross that enough that even a pair of depraved freaks like Bannon and his other guest, Eric Greitens (the former governor of Missouri who resigned after a sexual assault scandal) were visibly discomforted.

“Is that OK to tell that joke? I’m not sure,” finished Giuliani, whose rotting brain held it together enough to detect that his funny “joke” was not being well-received. Why he thought it was a joke is unclear.

I had to hear it so you do too:

(He refers to Rush as "Roger" because he has pudding for brains but in context it was definitely about Rush) pic.twitter.com/fh4zO3DUVi

Michelle Wie is one of the most accomplished female golfers in the world, having started her career as the youngest person to ever qualify for a USGA amateur championship at the age of ten. Since then, she has won the LGPA tour five times and has placed highly in a number of international golf tournaments.

Wie fired back at Giuliani on Saturday, calling him out for being a lecherous old pervert and pointing out that Giuliani should have remembered that she had beaten every other male golfer on the field instead of objectifying her and getting crudely hornt at an autism charity event. 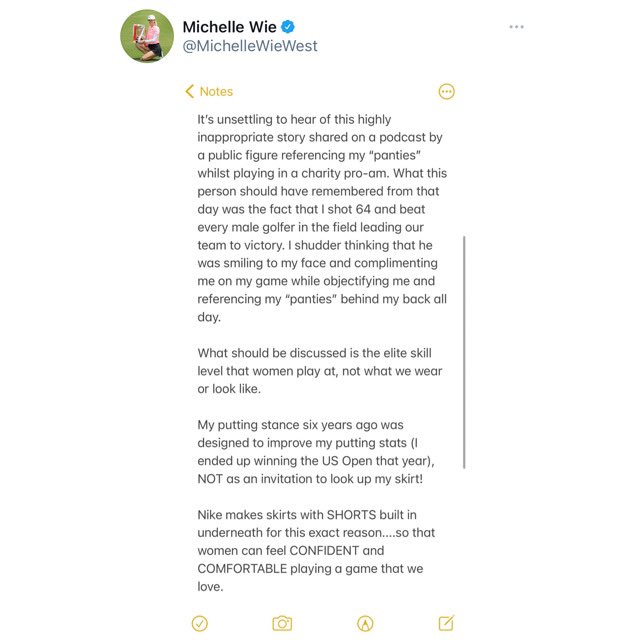 It is disgusting to hear such a prominent political figure speak of professional women athletes like a pubescent teenager and his little “joke” is yet another grim reminder of how far we have to go in the battle against institutional sexism and the “boys will be boys” mentality that Republicans cling to so desperately.