Republicans ignored the umpire to get tax cuts. Biden should do so to raise the minimum wage

It’s the post-Trump era in conservative media, and outlets like Fox News are still trying to find their way as they switch from the unabated boosterism that they purveyed in the administration of the “Former Guy” to the type of opposition role that they played during the Obama era.

Now that making false claims about stolen elections seems so passé, Fox News hosts have to find some new material to fill their airwaves, and naturally, it needs to be content that is specifically aimed at attacking those evil Democrats who defeated their orange hero so decisively.

The latest wealth of scandals associated with New York Governor Andrew Cuomo — from his alleged cover-up of nursing home deaths in his state to the accusations of sexual harassment recently lodged against him — provided Fox News host Jesse Watters with a convenient target to attack, despite the expansive number of Republican targets with equally bad, if not worse, behavior that is available to denounce to his audience.

In the context of discussing why Democratic women are supposedly reluctant to go after politicians in their party for #MeToo allegations, Watters goes off on a bizarre rant about sex dungeons.

Jesse Watters says the media and Democrats would "circle the wagons" if you "had a Democratic senator found out to have a sex dungeon."

"I swear to god that would happen. They would become pro-sex dungeon." pic.twitter.com/yMyzIw4qbZ

Besides ignoring the glaring example of former Senator Al Franken (D-MN) — whose comedic frat-boy antics and a zero-tolerance policy among his party’s female members led to his premature resignation from the Senate and completely undermines Watters’ argument — the Fox News talking head’s jeremiad also fails to acknowledge the fact that Republicans have been even more guilty of sudden changes in attitudes towards previously unthinkable behaviors once one of their own is found to have committed one transgression or another.

Donald Trump’s famous statement that he could shoot someone on Fifth Avenue and not be arrested is one example, but both of his impeachments, Ted Cruz’s Cancun getaway, Rep. Marjorie Taylor Greene’s harassment of a Parkland shooting victim, and numerous other incidents have seen members of the GOP twist themselves into pretzels to justify condemnable and often criminal actions.

Watter’s comments did earn him plentiful blowback on social media from people who were outraged at his unjustified political bias.

Oh he’s totally got one. 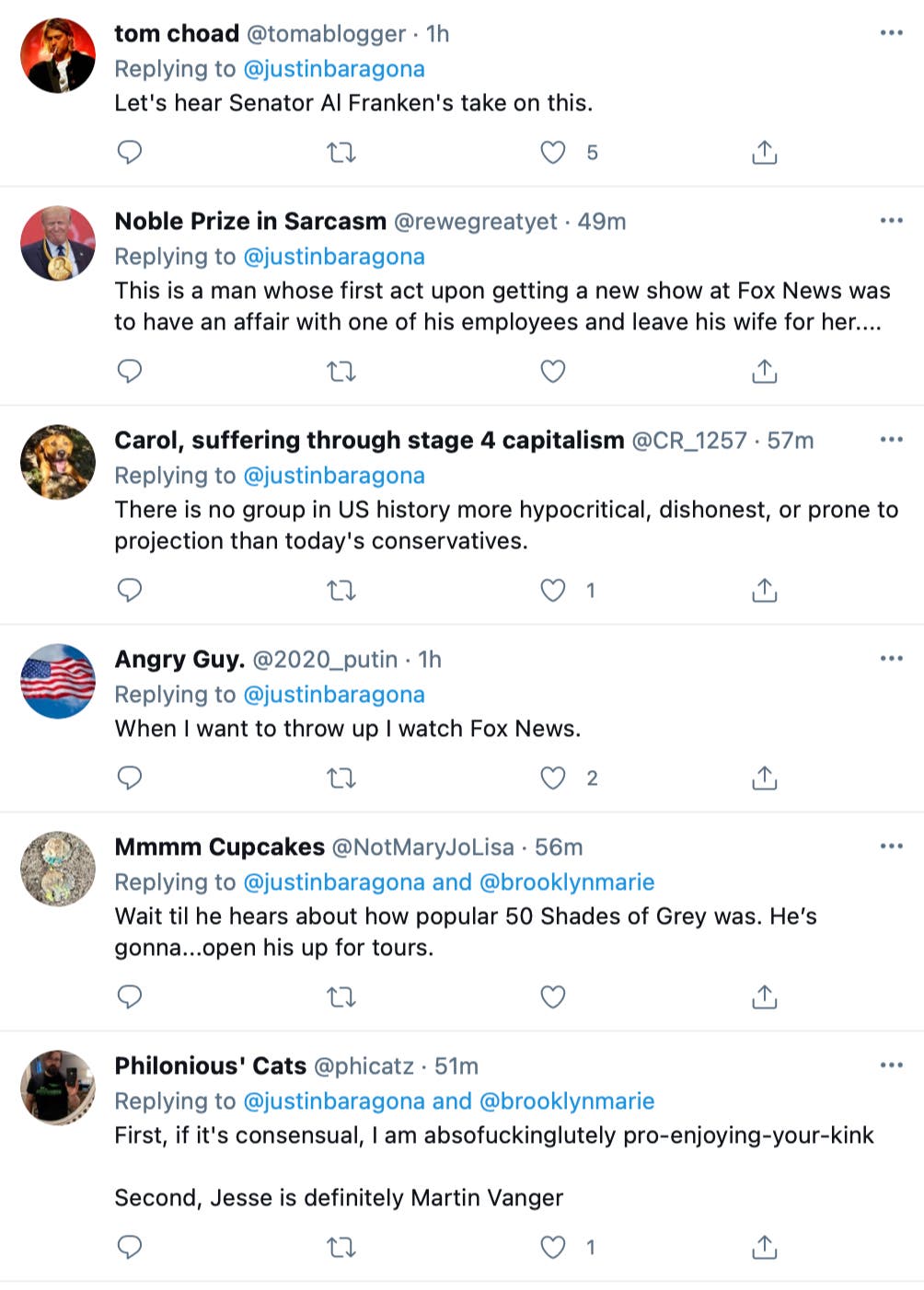 Of course, at this point, intelligent people don’t expect to take anything they see on Fox News seriously.

Unfortunately, in our ill-educated society, there are too many people who do take this political propaganda all too seriously as the recent assault on Capitol Hill too brutally demonstrated.

Until supposed “news” broadcasters like Fox News, OAN, and Newsmax are forced to present both sides of controversial matters as per the late, lamented “Fairness Doctrine” and are held accountable for promulgating outright lies like Trump’s election fraud campaign that they promoted endlessly, our national divisiveness is unlikely to end.