Now that the right-wing’s manufactured outrage over the “woke” gender-neutral marketing changes being made to Hasbro’s Potato Head toys has died down they have to move on to some fresh inane culture war issue to keep their base roiled up.

The Republicans know they have to constantly feed this grievance machine they’ve built or else their voters might cease being distracted long enough to realize that the GOP exists solely to shovel more wealth to the super-rich. They aren’t offering any actual material improvements to the lives of average Americans so they have to conduct idiotic media circuses over things nobody actually cares about in order to have something to talk about.

The current apocalyptic topic du jour is the decision by Dr. Seuss Enterprises, the company in charge of the incredibly popular and long-lasting books of Dr. Seuss, to stop publishing six of his books due to their overtly offensive imagery. The books are “And to Think That I Saw It on Mulberry Street,” “If I Ran the Zoo,” “McElligot’s Pool,” “On Beyond Zebra!” “Scrambled Eggs Super!” and “The Cat’s Quizzer.”

Some of them contain racist caricatures of Asian characters (referred to and depicted as stereotypical “Chinamen) and African characters (shown as savage and pseudo-simian). Choosing to cease their publication isn’t “canceling” Dr. Seuss as conservatives are insisting nor is it book burning. It’s a decision by a company to stop investing in printing books that no longer fit with contemporary sensibilities.

“These books portray people in ways that are hurtful and wrong,” Dr. Seuss Enterprises explained in a statement. 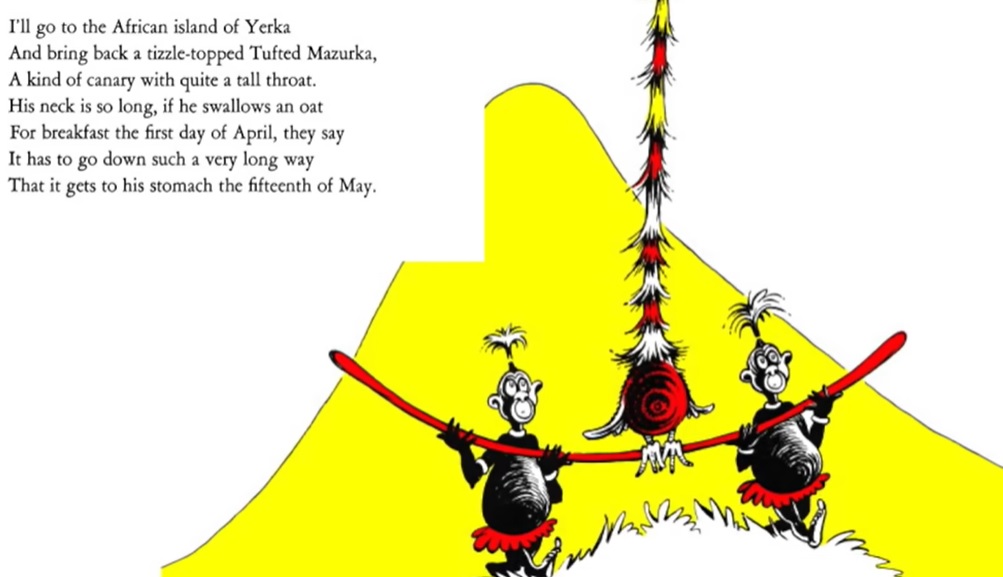 It must be stressed again that nobody is “canceling” the late Dr. Seuss, whatever that would even mean. This company is under no obligation to continue publishing books that are more likely to offend readers than entice them. Republicans should respect the free market they’re always insisting they love so much and accept this decision. Instead, they’re absolutely falling to pieces.

During her press briefing today, White House Press Secretary Jen Psaki was asked by a Fox News reporter about President Biden’s Read Across America Day and specifically his failure to mention Dr. Seuss. Laughing, Psaki explained that Biden’s statement was written by the Department of Education and aimed at celebrating diverse American authors. Not surprisingly, the Biden administration does not have a stance on the imagined “scandal” brewing in the conservative bubble.

A Fox News reporter asked Jen Psaki today about why Biden didn't mention Dr. Seuss in his statement about Read Across America Day. I can't believe Psaki didn't laugh her out of the press room. pic.twitter.com/LSCy8h453o

From Ben Shapiro to House Minority Leader Kevin McCarthy, the usual GOP blowhards have been racing to pump out aggrieved takes on the Seuss story. The pattern is a familiar one by now. They take some small story about a company doing something that they consider overly “woke” and then act as if every single liberal in this country is fired up with pitchforks and torches over the issue. In reality, conservatives are the only ones who care (or pretend to care) about the Dr. Seuss story. Yes, liberals will likely support a decision to get rid of the racist imagery, but we weren’t marching in the streets demanding these changes. Democrats are focused on actually passing legislation to help struggling Americans. Republicans are focused on crying about changes to children’s books.

The irony is that Dr. Seuss himself would have abhorred most of these right-wingers as he regularly satirized “America First” isolationists. 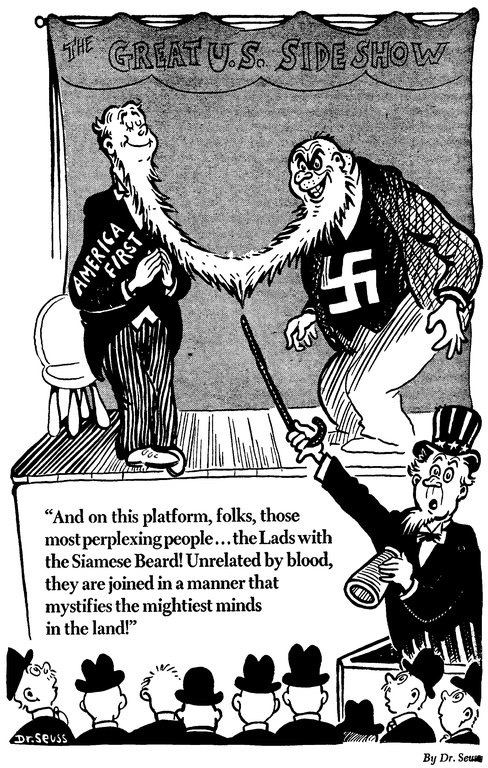 Given the fact that many of these conservative “thinkers” are functioning at a fourth-grade reading level (Charlie Kirk immediately springs to mind), it’s perhaps not surprising that they are getting so worked up about a reduction in the overall supply of these books.

“First, they outlaw Dr. Seuss and now they want to tell us what to say.” pic.twitter.com/825wEN6uKQ

The purported "cancelation" of Dr. Seuss has been mentioned at least 32 times on Fox News & Fox Business already this morn. It was mentioned 22 times on Newsmax's morning show.

For context, "Covid" was mentioned 11 times on Fox & Friends, and 12 times on Newsmax's morning show.

Disgustingly, Fox News gave Rep. Madison Cawthorne (R-NC) air-time to rant about Dr. Seuss but failed to ask him about the tidal wave of allegations of sexual misconduct leveled against him.

Madison Cawthorn was on Fox & Friends First for an interview this morning. He was never asked about the multiple sexual harassment allegations made against him, but he was given an opportunity to rail against the purported cancelation of Dr. Seuss. pic.twitter.com/fC0XpVj8Lg

Fox News, in a nutshell, today: "We can't even handle a Dr. Seuss book that might offend us… I literally can rant on this forever." pic.twitter.com/qxhY6bdTLU

The kids won’t know how to read or do math but at least they’ll be woke. https://t.co/RevaJheoA9

If you guys really want to talk about Dr. Seuss then we should be talking about how Hop On Pop promotes elder abuse

BRB buying all the Dr. Seuss volumes for the kids before the woke book burners can get to them all

If Dr. Seuss wanted to #DefundThePolice, his books wouldn’t be getting canceled.

The only Dr. Seuss book that will survive pic.twitter.com/TMTKispC4x

Why wasn’t Dr. Seuss racist when Michelle Obama invited him to the White House? pic.twitter.com/riaDSkzfbB

Happy Birthday, Dr. Seuss!! I will never cancel you!

A bunch of white people are cancelling Dr. Seuss for being racist at the request of no black person ever.

Thanks, but no thanks.

If we’re canceling Dr. Seuss, why not also Roald Dahl? And why limit to books? Why not cancel Chanel? Wasn’t she a literal Nazi agent? Yet look at the continued world-wide appeal of that brand. FTR, I hate cancel culture, but also hate inconsistency.

First it was Dr. Seuss.

Tomorrow, @SpeakerPelosi's "For the Politicians" Act will cancel your vote. #CancelCulture https://t.co/davOPiF83F

Let’s be honest, Dr Seuss books are probably about the only books Biden can get through at this point….#cancelcancelculture

No one is "canceling" Dr. Seuss.

Dr. Seuss Enterprises made the decision to stop publishing six books, like the one below. It's obviously racist.

Yes, Dr. Seuss evolved. Anyone can.

Show me someone upset about this and I'll show you someone unwilling to evolve. pic.twitter.com/u6Gh8Irm1P