Stripped of his magical Twitter super-powers, Donald Trump has now been reduced to trolling his ever-expanding list of enemies through paltry and less prominent press releases that create a media filter between the humiliated former president and his adoring base.

Besides creating a large time lag between when Trump is initially offended by a politician, celebrity, or media outlet and when he is able to shoot back with some bullying, semi-coherent response to his detractors, the limited effectiveness of press releases in disseminating his unfiltered vitriolic messages has reduced his overall media presence outside the confines of the extremist right-wing news outlets frequented by his base.

It’s not surprising, therefore, that Trump’s latest jeremiad targeting the editorial board of The Wall Street Journal, the Rupert Murdoch-owned financial newspaper of record, has attracted so little attention.

The financial world conservative intellectuals at the Journal had published an editorial earlier this week urging the Republican Party to move on from the candidate that somehow managed to help their party lose control of both houses of Congress and the White House in the course of four short years.

“As long as Republicans focus on the grievances of the Trump past, they won’t be a governing majority,” the editorial board concluded in its recommendation to the increasingly shrinking pool of rational members of the GOP.

It is the sort of sensible response to having their favored party bet on a losing horse, albeit one who continues to scream “I won!” while finishing furlongs behind the actual winner like some ersatz Mr. Ed.

Although The Wall Street Journal published its editorial on Monday, it took Trump eons in social media time to respond to the call for the Republican Party to jettison their failed leader if they ever expected victory again in the future.

In a rambling statement issued from his Florida retirement home at Mar-a-Lago, Trump finally hit back at his WSJ critics with a statement that many regarded with a raised eyebrow and the thought that the man doth protest too much.

“Fortunately, nobody cares much about The Wall Street Journal,” he wrote. “They have lost great credibility.”

We’ll pause for a second to allow you to catch your breath after the fit of laughter you most likely experienced after hearing Donald Trump accuse someone else of a lack of credibility.

Trump went on to accuse the newspaper’s editorial board, which operates separately from its newsroom, of supporting “globalist policies such as bad trade deals, open borders, and endless wars.”

Trump also used his statement to try to pawn off the blame for Republican electoral losses on a senate leadership who defied his call for passing a COVID relief bill that included $2000 payments to most Americans.

“This latter point was used against our Senators and the $2,000 will be approved anyway by the Democrats who bought the Georgia election—and McConnell let them do it!” Trump said in his statement. “Even more stupidly, the National Republican Senatorial Committee spent millions of dollars on ineffective TV ads starring Mitch McConnell, the most unpopular politician in the country, who only won in Kentucky because President Trump endorsed him. He would have lost badly without this endorsement.”

While Trump may continue to try to wield his devoted base as a cudgel to corral recalcitrant GOP politicians into his thrall by using the threats of primary challenges, as The Wall Street Journal so astutely points out, the type of right-wing extremist Trump-backed candidate that may win in a Republican primary isn’t necessarily the best choice to put up in a general election where so many people who have more than enough of Donald Trump to last several lifetimes will be casting their ballots.

One can simply write off Trump’s useless bleatings as the pathetic cries of a sore loser, however, as the violence on January 6th so amply demonstrated, the former president and his fanatical white supremacist base still present a clear and present danger of fomenting violence in this country as deadly as any threat from ISIS or Al Qaeda.

Until Trump is punished for his crimes and locked away in prison, we must watch his statements carefully for signs of further insurrection.

You can read Donald Trump’s full statement in response to The Wall Street Journal editorial below. 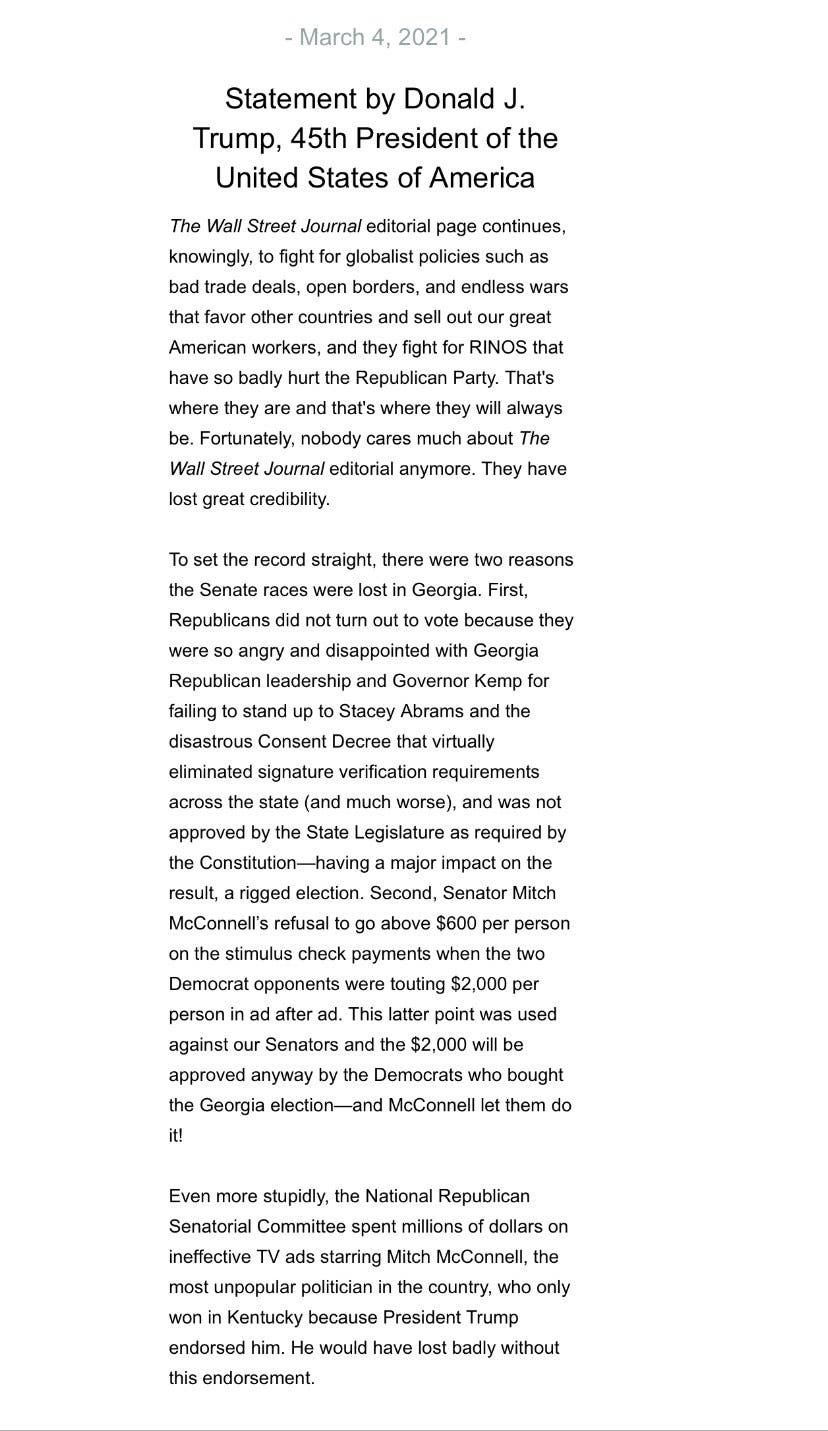 Original reporting by Jonathan Easley at The Hill.