It happens after every mass shooting, an all too frequent occurrence in these United States compared to anywhere else in the world.

Those horrified by the needless deaths begin their ritual call for stronger gun regulations and a return of the ban on assault weapons that was enacted during the Clinton administration and managed to reduce fatalities from mass shootings by 70%.

Republicans, on the other hand, scream about their 2nd Amendment rights and ignore the line in there about a “well-regulated militia.”

Yet, as this graphic created by The New York Times demonstrates, our nation is clearly an outlier in its inability to control a level of violence tolerated in no other country in the world. 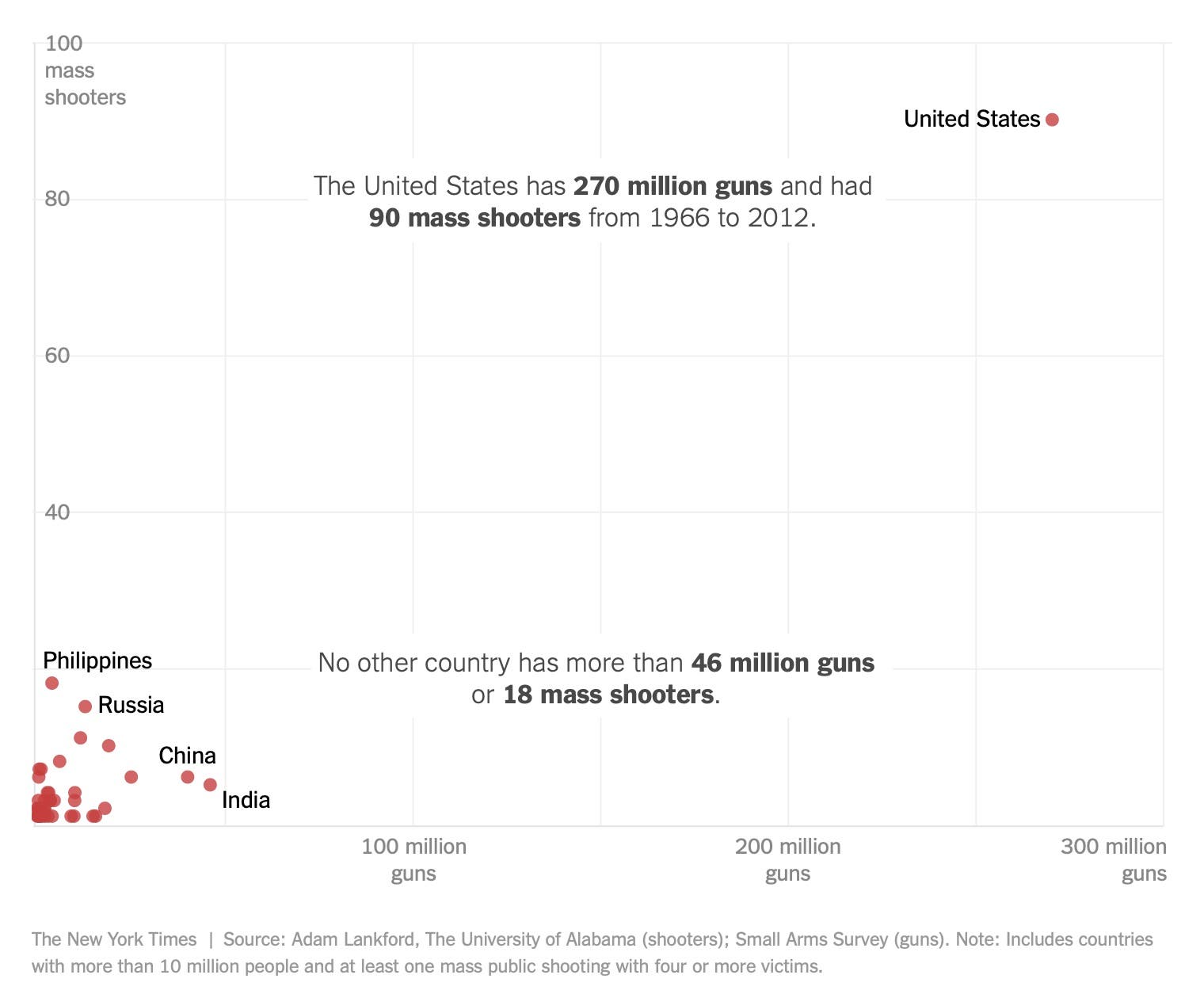 The article that accompanies the graph presents a compelling argument that the sheer availability of so many firearms is a huge factor in the disparity in the number of mass homicides committed in the U.S. compared to civilized nations.

A right-wing gun advocate inadvertently made much the same point today when he went on Fox News to argue that many of the proposals that outraged Democrats are making to help stem the problem of lax gun control are already in effect in Colorado, the site of the latest armed massacre of innocent people.

Forgetting to note that few people have been able to pull off the murders of large groups of people in a short period of time without using semi-automatic weapons, Smith claims that the state of Colorado already has laws on its books calling for universal background checks, red flag warnings for people with mental health issues, and areas set aside as gun-free zones.

By Smith’s logic, the supermarket shootings in Boulder simply prove that gun legislation is ineffective and only serves to prevent honest Americans from lawfully possessing weapons.

Yet, it was only the decision by a Colorado state district court judge less than two weeks ago in a lawsuit against the city of Boulder’s ban on the sale of assault weapons brought by a local gun shop and the Colorado State Shooting Association that allowed the shooter to purchase a semi-automatic weapon functionally equivalent to an AR-15 assault rifle and actually have the firepower to kill so many people in such a short period of time.

Yes, enhanced background checks, red flag laws, and gun-free zones alone may not substantially prevent all mass shootings, but as the chart above indicates, a reduction in the actual availability of semi-automatic weapons  — and firearms in general — will statistically lead to a reduction in the fatality rate in these types of incidents.

It’s far past the time to drag the United States into the 21st century where military stockpiles contain weapons of mass destruction unimaginable to our founding fathers and which no homegrown militia could defeat with even their most advanced civilian armaments.

Those who are intent on inflicting violence will still find a way to do so, but without easy access to semi-automatic weapons, the number of people they can harm and the frequency of killings will surely decline.

Let’s leave you with an inspirational hymn to the elimination of guns in a beautifully-made fan video created by YouTube user Argonave TC for the XTC song “Melt the Guns,” including these hopeful words: