“It’s a f*cking nightmare!” Republican aides whine about how Biden is running the tables on them

If there is anyone in the universe who is less qualified than pretty much anyone else to lecture President Biden on his supervision of America’s effort to vaccinate its population against the COVID-19 virus and its various mutations, it is his predecessor, Donald Trump.

Nonetheless, that hasn’t stopped the man whose failure to acknowledge the dangers that the coronavirus pandemic could cause — and to urge effective counter-measures to stop its spread — from weighing in on the federal government’s decision to temporarily halt the use of Johnson & Johnson’s single-dose vaccine after six recipients of the vaccine suffered rare side effects days after their vaccinations.

The decision was made “out of an abundance of caution,” according to a joint statement from Dr. Peter Marks, director of the Food and Drug Administration’s Center for Biologics Evaluation and Research, and Dr. Anne Schuchat, principal deputy director of the CDC, despite the fact that six cases out of the seven million doses administered in the U.S.constitutes a minuscule percentage of risk for any single individual compared to the dangers involved in actually contracting COVID.

While both the FDA and the CDC will now determine whether the side effects are directly related to the Johnson & Johnson vaccine, they did not actually suspend the use of the vaccine, saying that health care providers can decide whether the benefits of a shot outweigh the risks for any individual patient that they treat.

Still, with a significant percentage of Americans still wary of getting vaccinated, the government’s move was a shrewd action to ensure that it maintains transparency while investigating the science behind the side effects that caused a rare type of blood clot in these six people.

For the man whose own stewardship of the government response to the pandemic was largely responsible for his status as an ex-president, no abundance of caution was a sufficient excuse for the temporary halt, when he could invent a new conspiracy theory to attack his more competent replacement with.

Trump involved both the FDA and vaccine-developer Pfizer in his latest paranoia-induced rant, issued as a press release now that he no longer has the instant access to social media he once enjoyed.

Given his long history of spreading misinformation about the COVID virus — “We have it totally under control. It’s one person coming in from China. It’s going to be just fine.” — Trump’s comments on the Biden administration’s conduct in managing the kind of comprehensive federal response to the pandemic that he himself couldn’t and wouldn’t accomplish should be taken with as much skepticism as his claims of responsibility for the speed with which a number of competing vaccines were developed, in other words, as much skepticism as possible.

Judging from the response to Trump’s statement on social media, generating sufficient skepticism about his claims was not a problem.

Exactly. Trump is such a simple Simon. I’m astounded that people can’t see through him

So that's why Trump dissed them in his latest "statement" excoriating Biden Admin. for putting the brakes on J&J vaccine.

Any sense. Trying to inject more "conspiracy" into the populace. Please just stop. Enough. Let Scientists and Doctors and competent people take it from here. It serves no purpose other than to make half the population more paranoid just what we need.

Not sure they really had a choice, what with the Zionist space lasers and all…

RT @Bencjacobs: Former President Trump comes out with a statement on J&J attacking the Biden administration for the pause and suggesting a Pfizer conspiracy to do so pic.twitter.com/bqLWgooapZ 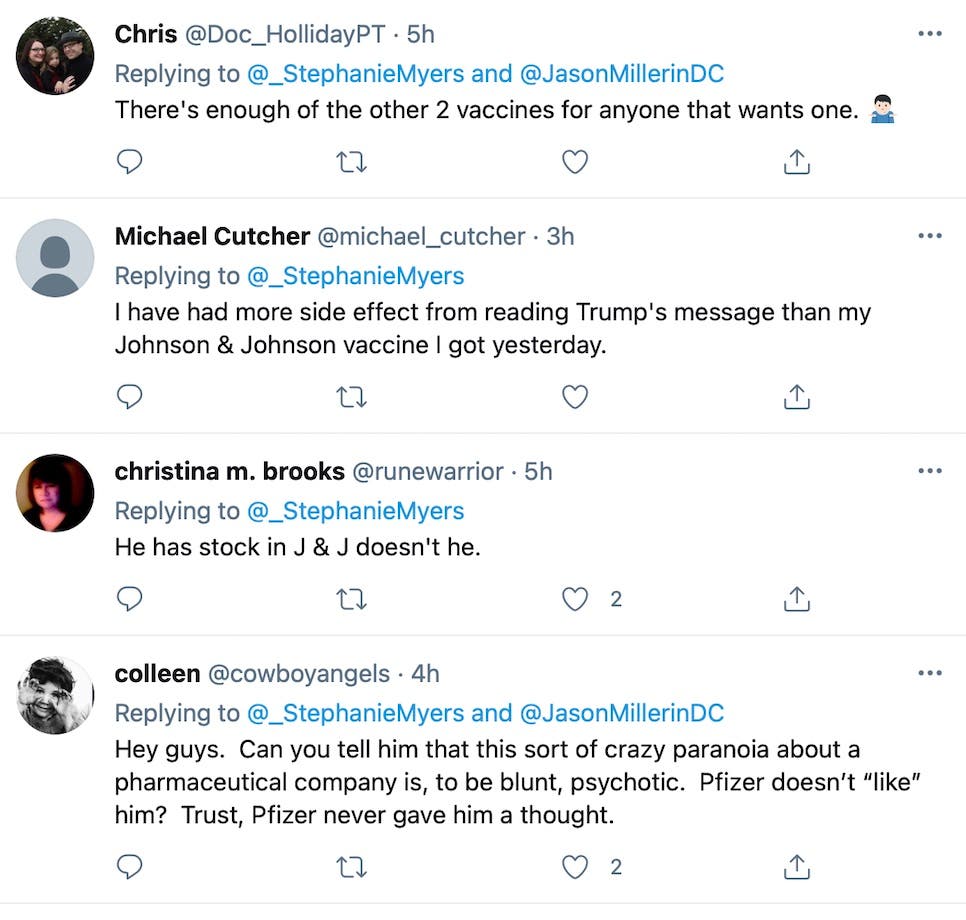 Oh for the days when former presidents respectfully dropped out of sight and mind to allow their successors to do their jobs in peace!

With fully half the population smart enough to ignore anything the disgraced insurrectionist says, the biggest worry is the reaction that his words will generate among those people who were foolish enough to swallow his defecatory byproducts and storm the Capitol.

Let’s hope that the state prosecutors in New York and Georgia can accelerate their cases against Donald Trump and get this man who is a clear and present danger to our society off the streets and into prison where he belongs.