A former Trump senior advisor-turned-critic just called out the disgraced former president’s current top political advisor in a viral Twitter thread (embedded below), who today got a stern warning from a Florida judge over the cyberstalking threats he’s making in connection with his long-running paternity case. Occupy Democrats obtained exclusive copies of the emails from Jason Miller threatening the mother of his child A.J. Delgado if she continues to tweet about the case.

As a top Trump 2020 campaign official, Miller has become Donald Trump’s primary media mouthpiece, and the advisor suspected of writing much his lightly-covered press releases. He’s also reportedly a new employee of the West Palm Beach-based pro-Trump network Newsmax. Strangely, this is not listed on his latest financial disclosure, which Occupy Democrats obtained exclusively for this story. Oddly, there is no Trump income listed on those disclosures even though a recent report indicates some of those close to the former guy are earning $30,000 a month.

The Virginia-based political consultant seems to spend as much time sending out threatening letters to his son’s mother A.J. Delgado, and to her lawyer, who has had to hire forensic experts to find the money he’s trying to hide. His latest tactic was to threaten public embarrassment by revealing Delgado’s old miscarriage, which the Cuban-American lawyer referred to in a 2012 court filing as an abortion, which is how ‘un aborto espontáneo’ might be referred to in Spanish.

“As many of you know, I had a miscarriage in 2011, which impacted me GREATLY,” tweeted Delgado to begin the viral thread. “Trump spox Jason Miller sent an email last night to my attorney (in a series of insane emails) bringing it up out of the blue and THREATENING me w[ith] it, to tell the public I had an abortion.”

Today, the entire matter came to a head in the lead up to a high-stakes hearing where Jason Miller could have been ordered to immediately pay hundreds of thousands of dollars in past-due legal fees for Delgado. Occupy Democrats attended that hearing where the judge continued the final ruling on Miller’s responsibility for attorney’s fees to a final showdown in early September. But Florida judge Peter Holden – who was appointed from outside of Miami’s 11th Circuit as a guest jurist – issued a strongly worded warning about the Trump advisor’s decision to threaten retaliation in writing against A.J. Delgado for tweeting about the paternity even though he blocked her on the service.

“If threats are being made there are other venues to tackle that,” said Judge Holden referring to Delgado’s attorney asking him to put an end to the nonstop stream of Trumpian invective from Miller. “If [there is] harassment, there are other venues to tackle that. No one should take lightly what you’re telling us.” The only other venue which could resolve a cyber-harassment or extortion complaint would be if the local state attorney’s office or police department takes the case.

Here are the emails: 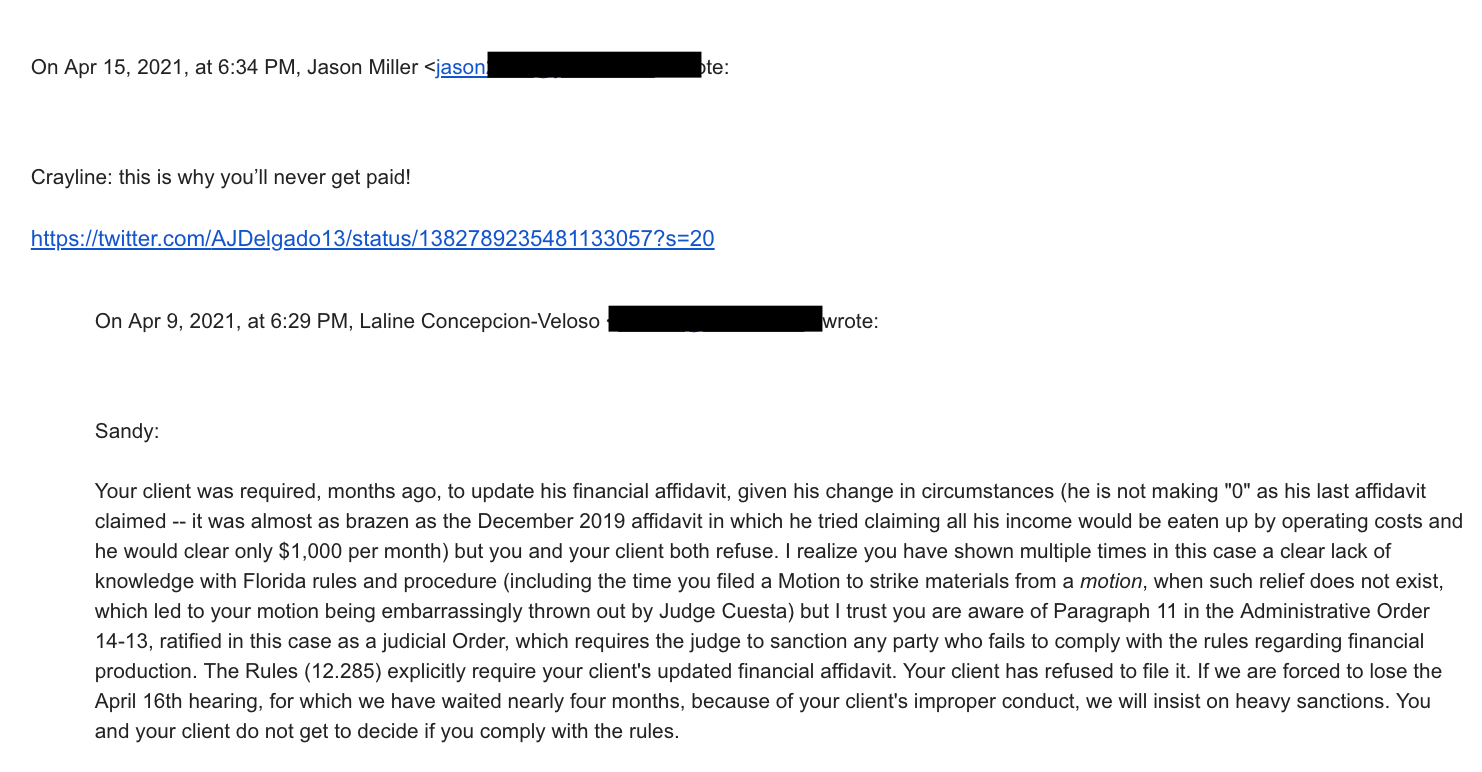 Miller’s follow-up email below threatens revenge and shows a pattern of behavior that family law attorneys in South Florida have described as cyberstalking. This is the email where the Trump advisor threatened to attack his son’s mother for her miscarriage. 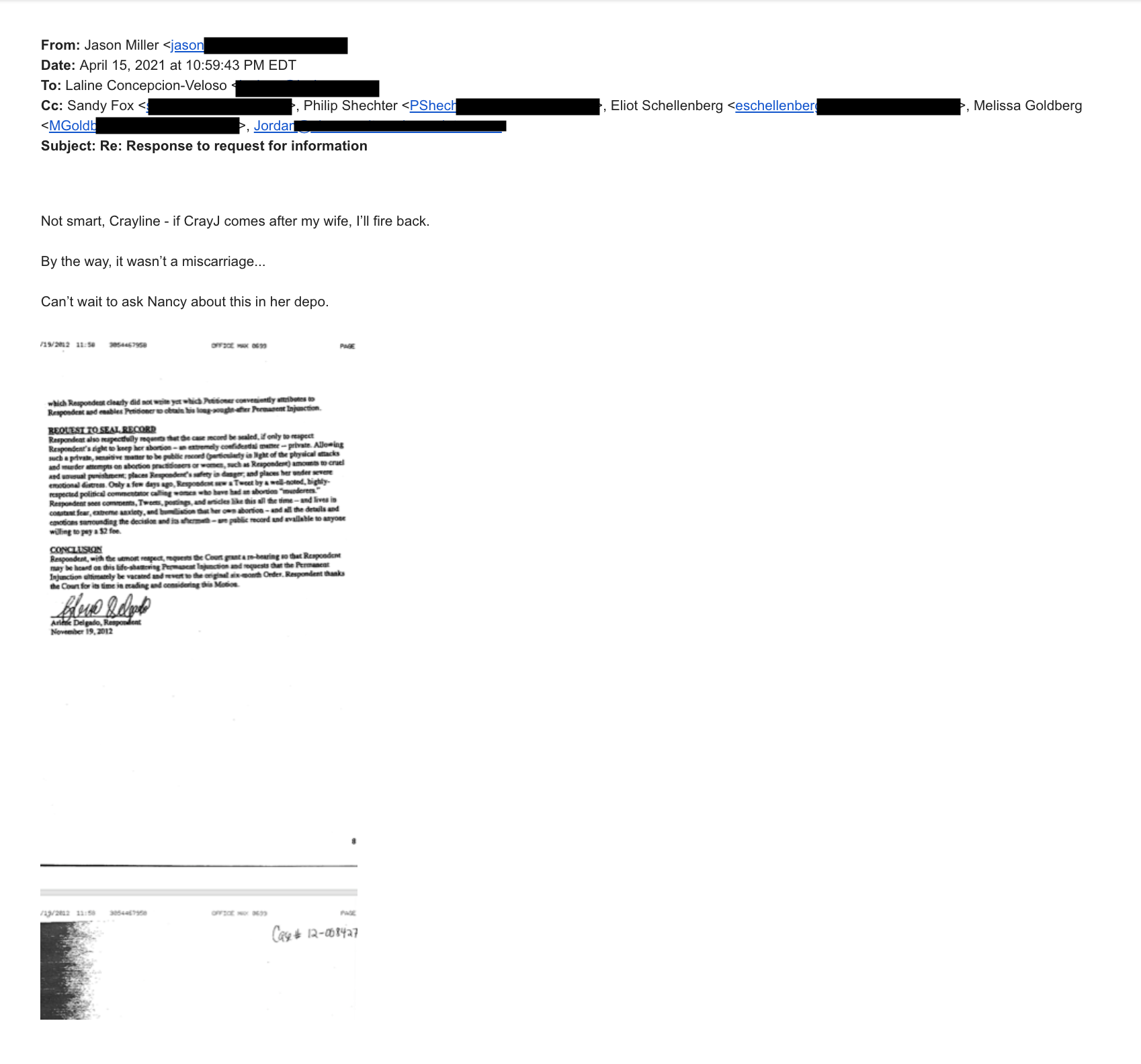 Miller’s missive about Delgado’s tweets is ironic, considering he blocked her on Twitter — which means nothing she could have tweeted afterward would meet the Florida definition of criminal cyberstalking if indeed any Twitter exchange could. And there’s nothing preventing Delgado from tweeting that Miller pays $2500 a month for a nanny to help his wife with their children because it’s part of the public record of their case.

“Kelly Miller will 100% be deposed in this case because we have many questions for her about her and Mr. Miller’s finances,” said A.J. Delgado to Occupy Democrats. “It is extremely relevant. Miller’s low-brow tactics will not work, just as none of his tactics in this case ever work.”

In a completely coincidental circumstance, Jason Miller also lost a major appeal in federal court today, which put an end to his libel case against Gizmodo for publishing a story entitled, “Court Docs Allege Ex-Trump Staffer Drugged Woman He Got Pregnant With ‘Abortion Pill.” He admitted to hiring prostitutes in that case. When contacted for comment on this story, Miller was aggravated and replied that he would not answer any of my questions.

It will take until at least next year to resolve the case of Miller vs. Delgado because of the long-delayed conclusion of his payment of legal fees before a trial can be set.

As many of you know, I had a miscarriage in 2011, which impacted me GREATLY.

Trump spox Jason Miller sent an email last night to my attorney (in a series of insane emails) bringing it up out of the blue and THREATENING me w it, to tell the public I had an abortion.

I want to share this because I want people to realize that (a) my safety and my son's is in danger bc this man's behavior is not normal and his emails show he is completely unhinged and (b) to show how yet again a very ugly, lost man tries to weaponize a woman's pregnancy history

Having an abortion is not a malicious thing — what's pure evil-of-the-devil is bringing up that or a miscarriage.