Questions swirl after confrontation between Trump crony and SC GOP leader: “I know about you and Lindsey”

It’s not like the old days when Donald Trump still had his Twitter account and one could expect to see his instant reaction to anything and everything that registered across his limited consciousness posted on social media within minutes of it registering in the public arena.

Nowadays, having been banned from most responsible social media platforms, the former president is reduced to issuing his deplorable commentary via the inefficient removal of press releases that make his hot takes seem at best lukewarm by the time they reach the public.

Thus we get Trump’s unrequested opinion on the 2021 Oscar Ceremony put on by the Academy of Motion Picture Arts and Sciences a full two days after the broadcast of the first pandemic edition of the fabled awards program.

If you predicted that the disgraced ex-president wasn’t exactly thrilled by what he saw on the most diverse Academy Awards broadcast in history, you would not be wrong.

Trump, who for some strange reason considers himself an expert on broadcast television ratings and production strategies, attacked the Academy for everything from its use of a nickname that dates back at least as far as 1939 to the hostless format that it has employed in recent years to try to improve its television ratings and cut back the seemingly interminable length of the live broadcast. 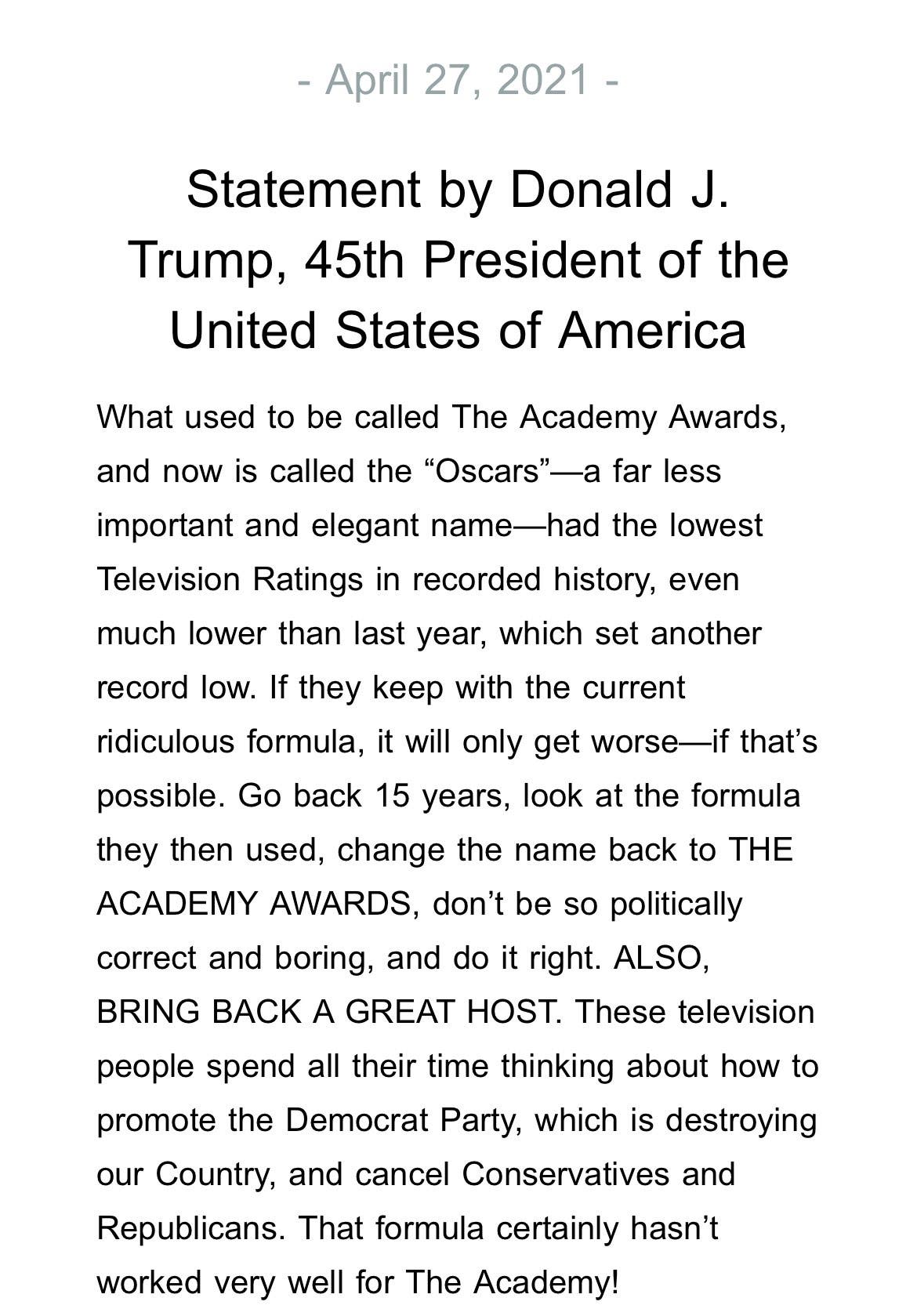 Perhaps while waiting for the indictments that are surely coming his way from state prosecutors in both New York and Georgia, Trump can find some gainful employment as a television critic.

At least his reactionary pronouncements on TV programs will be less damaging to American society than anything he may have to say about politics, foreign affairs, or public policy.

Trump’s comments were inevitably posted on Twitter where they were roundly ridiculed by many while others simply declared that they never wanted to see any of that man’s garbage comments posted on social media ever again.

I’m still not sure if it’s real or satire.

Despite the wish of so many that Trump would simply disappear completely from their social media feeds, that malicious danger to our society is still waddling free on the streets of our nation and must be carefully monitored for his destructive behavior until he is safely locked up in prison as he so ardently pressed for his 2016 opponent Hillary Clinton to be.

Besides, it’s so difficult to withdraw cold turkey from the thrill of ridiculing the idiocy that spews forth from Donald Trump’s malignant mind and contains more fantasy than any major motion picture.

While some may wish to ignore the danger that we narrowly escaped from so recently, it’s imperative to alert you of the former guy’s plotting in exile so we are all prepared to counteract his nefarious schemes to come with heroic actions that can be documented in future feature films.