As many of the people swept up in the January 6th Capitol insurrection are belatedly learning, participating in right-wing demonstrations of hate and fury isn’t particularly good for your current and future employment opportunities.

Perhaps some of the folks who ruined their lives on behalf of Donald Trump’s lies about a stolen election could have avoided becoming pariahs being sought out by the FBI for their crimes if they know about the fate of 24-year-0ld Peter Cytanovic.

While his name might not ring ant immediate bells, one look at the picture taken of Mr. Cytanovic carrying a tiki torch at the August 2017 “Unite The Right” rally in Charlottesville, Virginia, that resulted in the death of counter-protestor Heather Heyer by vehicular homicide, will bring back painful memories of one of the lowest points in the Death Valley of the Trump era. 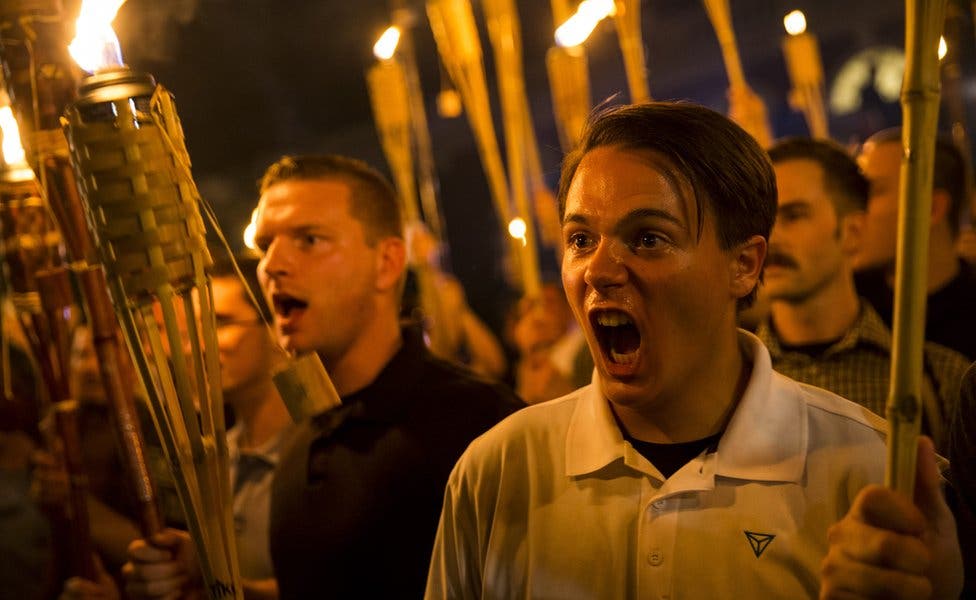 That’s Cytanovic in the white shirt captured in an image that went on to be circulated around the world and became the iconic shot announcing a new generation of racists were emerging in the States that were no longer so United.

While the man who drove the car that deliberately ran over Ms. Heyer is now serving a life sentence for that hate crime, the fate of the many other participants in the rally of white nationalists has been little noted until HuffPost revealed the story of Peter Cytanovic’s post-rally life.

During an investigation of steps being taken by America’s military to weed out violent right-wing extremists in its ranks, HuffPost journalist Christopher Mathias discovered that the ne0-Nazi poster boy had subsequently pursued a military career, enlisting in the Nevada National Guard a little more than two years after he became the face of a despicable movement with his hate-filled visage, chanting “Jews will not replace us.”

Tipped off that Cytanovic had portrayed himself as a “U.S. Officer Candidate at US Army” in his LinkedIn profile, HuffPost scoured military databases to try to find exactly where the extremist had landed in the armed forces.

The extensive search eventually turned up a “Peter Cytanovic VI” in Battle Born – The Quarterly Magazine of the Nevada National Guard in a list of recent enlistees.

As it turns out, Cytanovic’s enrollment didn’t last as long as he might have imagined that it would.

“A spokesman for the Nevada National Guard confirmed that Cytanovic enlisted on Nov. 22, 2019, but that his stint in the U.S. armed forces lasted only a little over a year — and that he was ejected because of his ‘affiliations’,” Mathias writes on HuffPost.

“’Initial criminal and fingerprint checks found no record that would deny enlistment,’ Lt. Col. Mickey Kirschenbaum told HuffPost in a statement explaining how Cytanovic initially joined the U.S. military, which has regulations forbidding participation in extremist groups,” the article continues.

Since Cytanovic had a four-year college degree, he was allowed to enter the Nevada National Guard at the highest rank available to junior enlisted recruits, a Specialist E-4.

Although he began attending monthly drills to get ready for Army Basic Combat Training, it soon became apparent that Cytanovic would not be able to receive a security clearance necessary for him to continue in the Guard.

“A Defense Department background check revealed that the FBI had opened an investigation into Cytanovic following his participation in the Charlottesville rally,” Lt. Emerson Marcus, a spokesperson for the Nevada National Guard, told HuffPost.

Marcus went on to say that the background check that revealed Cytanovic’s “affiliations” led to a cancellation of his basic training deployment as early as July of last year, but it took until December 17th for his formal “entry-level separation” from the Nevada National Guard to be completed.

The FBI declined to comment to HuffPost on its investigation of Cytanovic, who was never charged for any of his activities during the events in Charlottesville.

While Cytanovic has subsequently renounced white nationalism and denied understanding what the term meant when he described himself as such, his past actions and that iconic photo were apparently not so easy to leave behind.

Hopefully, the example of Peter Cytanovic’s expulsion from the armed forces — and the many people indicted in the Capitol incursion —will make at least a few people considering acting on their right-wing extremist beliefs think twice about how their plans may affect their future employability.

Then again, if these folks had any sense they wouldn’t hold those beliefs to begin with.

Actions have consequences, particularly when a photo of a person engaging in them becomes so iconic.