Congressman Paul Gosar (R-AZ) is one of the Republican members of Congress who helped plan the “Stop The Steal” rally on January 6th that devolved into the most serious insurrection in U.S. history, resulting in the violent invasion of the Capitol Building and the deaths of at least five people, including one Capitol Police officer.

Here is a man whose own siblings were so appalled by his extremist political positions that they actively campaigned against their brother, appearing in opposition campaign ads to warn their fellow Arizonans against voting for him.

Given his background, one would not expect Rep. Gosar to be among the legislators on the House Oversight Committee investigating the circumstances around the insurrection, having been implicated in its planning and organization.

Indeed, one might wonder why he still a member of Congress at all under the circumstances.

Still, this morning there Gosar was, angrily accusing the media, Democrats — and anyone else opposed to disgraced ex-president Donald Trump — of employing “propaganda” to exaggerate the bad behavior of the Capitol’s MAGA-hatted violent insurgents.

Even worse, he attempted to turn Ashli Babbitt — a former Air Force reservist who was among the crowd of rioters who tried to crawl into the Capitol Building through a broken window and was the sole invader to be shot and killed in the process — into a MAGA martyr by labeling her death an execution, despite the fact that the Capitol Police officer who pulled the trigger was cleared of wrongdoing by a subsequent Justice Department investigation.

Congressman Gosar’s revisionist history came during his questioning of Donald Trump’s former acting U.S. Attorney General, Jeffrey Rosen, in which Gosar described Babbitt as a “veteran” who was “wrapped in a U.S. flag.”

While Babbitt was, in fact, a veteran, footage of her during the insurrection shows that it was not a U.S. flag that she wore on her shoulders, but a Trump flag, a distinction with apparently little difference in the eyes of Republicans locked in slavish devotion to their autocratic leader. 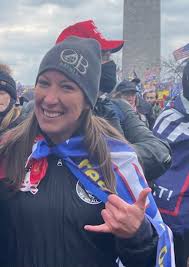 During his questioning of witnesses at the committee hearing, Gosar went on to demonstrate Republican unwillingness to assign responsibility and demand accountability for the deadly incursion into his own workplace by castigating the Department of Justice for pursuing the prosecution of the destructive right-wing rioters, accusing the DOJ of “harassing peaceful patriots across the country” in a ludicrous rebranding of the seditious Oath Keepers, Proud Boys, and other violent extremists who took part in the insurrection of those deluded by Trump and conservative media.

It is obvious that someone like Congressman Gosar, with links to the organizers of the rally that erupted into violence, should not be among those investigating an incident in which he himself is implicated.

It’s also obvious that Gosar should be expelled from Congress under the provisions of Section 3 of the 14th Amendment which states that “no person shall be a Senator or Representative in Congress, or elector of President and Vice President, or hold any office, civil or military, under the United States, or under any state, who, having previously taken an oath, as a member of Congress, or as an officer of the United States, or as a member of any state legislature, or as an executive or judicial officer of any state, to support the Constitution of the United States, shall have engaged in insurrection or rebellion against the same, or given aid or comfort to the enemies thereof.”

When will these Republican traitors be expelled from office? It’s long past the time.

You can watch Congressman Gosar’s performative theater at the House Oversight hearing on the January 6th insurrection in the video below.