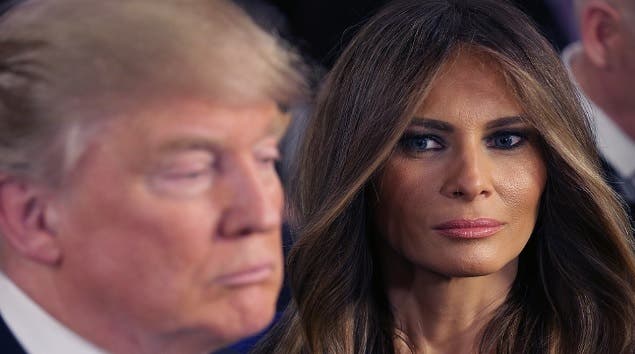 All the lurid details that the Trump administration managed to keep out of the public eye while Donald was still in the White House are beginning to spill out in the wake of his landslide defeat by Joe Biden.

Some of the most interesting dirt to emerge from the post-presidential examination of the inner working of the prior administration are contained in Zero Fail: The Rise and Fall of the Secret Service, a new book by Washington Post journalist Carol Leonnig that reveals the enormous security costs associated with the Secret Service protection of the Trump family while they were in the White House.

According to Leonnig, after the news of Donald Trump’s sordid affair with adult film star Stormy Daniels — a liaison that took place in the weeks while Melania Trump was recovering from the birth of their son Barron — the former first lady canceled all public appearances with her husband and decided to spend her time at Mar-a-Lago indulging in the available high-end spa services.

That’s a pretty expensive spa visit to be subsidized by American taxpayers even before the COVID-19 pandemic strained our nation’s economic resources.

Whatever marital discord that the POTUS may experience, it’s a difficult bill to expect the American people to foot without a deep sense of disgust and anger.

Unfortunately, the $64,000 expense for the spa visit looks like peanuts in the context of the overall costs of protecting the Trump family, costs that extend well into his retirement in exile.

Leonnig estimates that during the first four years that Trump and 13 of his family members were awarded Secret Service protection, the tab reached as much as $600 million.

While both Donald and Melania are entitled to lifetime protection by the Secret Service, and their 15-year-old son Barron will be covered until his 16th birthday, the rest of his family would have lost their security details at the end of his presidency had Trump not issued an executive order extending that protection for six additional months in the waning days of his term.

Thus, as his extended family takes post-campaign luxury vacations and seeks lucrative post-administration business opportunities in the foreign countries with which they were recently engaging in diplomatic missions, security costs are skyrocketing.

For example, in May Trump’s son-in-law, Jared Kushner took a trip to Abu Dhabi where Secret Service agents were forced to spend $12,950 in Ritz-Carlton hotel rooms alone.

Jared and Ivanka’s 10-day ski trip to Salt Lake City, which they took in January after leaving the White House, had equally exorbitant costs simply for Secret Service accommodations, reportedly totaling $62,599.39, according to the ethics watchdog group Citizens For Responsibility and Ethics in Washington (CREW).

The sad thing is that most of these costs could have been avoided had the second impeachment of Donald Trump had been as successful as it should have been and he had been stripped of his post-presidential prerogatives and perks.

Unfortunately, our sclerotic Congress likely can’t act quickly enough to strip the Trump family members of their Secret Service details before Trump’s six-month extension expires on its own, and it’s doubtful that slavish congressional Republicans would ever agree to remove that privilege from the party leader that they are protecting themselves — at least politically — on a daily basis.

It seems like we’ll be stuck regarding the money wasted on the Trump family’s security as if it were alimony paid in a divorce. It hurts to have to pay it, but it beats having to continue in a completely dysfunctional relationship.