At this point, calling Donald Trump a broken record would be not only a gross understatement but an act of profound disrespect towards broken records. Say what you will about having a vinyl that only repeats the same few lyrics over and over, at least it doesn’t have the power to fundamentally destabilize American democracy.

Since Biden defeated him and took over the White House, Trump has been utterly fixated on his Big Lie that he actually won the election. Whether or not he actually believes that victory was snatched away from him by a complex campaign of mass voter fraud is ultimately irrelevant. What matters is that his supporters believe it and a large swath of the MAGA movement is now convinced that our elections are fundamentally illegitimate. This lie resulted in the Capitol insurrection and if it’s not aggressively stamped down on every time Trump opens his mouth the next time could be even more deadly.

While he no longer has access to his Twitter or Facebook accounts, Trump has been steadily releasing statements through intermediaries and today sent one out repeating some of his more pernicious lies about the election.

The former president complained that Georgia is planning to “remove over 100,000 ‘obsolete and outdated names off their voter rolls.”

“BUT WHAT ABOUT THE LAST ELECTION? WHY WASN’T THIS DONE PRIOR TO THE NOVEMBER 3RD PRESIDENTIAL ELECTION?” Trump wrote in all caps, demonstrating both his penchant for internet troll behavior and his profound ignorance about how elections work in this country.

He went on to state that “we (you!) won the Presidential Election in Georgia,” a patently untrue claim. Dipping into his bag of conspiracy theories further, he promised that “much other information” about Georgia and other states will “soon be revealed.”

“It is coming out FAST and FURIOUS. The 2020 Presidential Election was rigged!” lied Trump.

Given his extensive track record of promising bombshell evidence only for such evidence to never materialize, it seems safe to presume that he is not in possession of any new information. 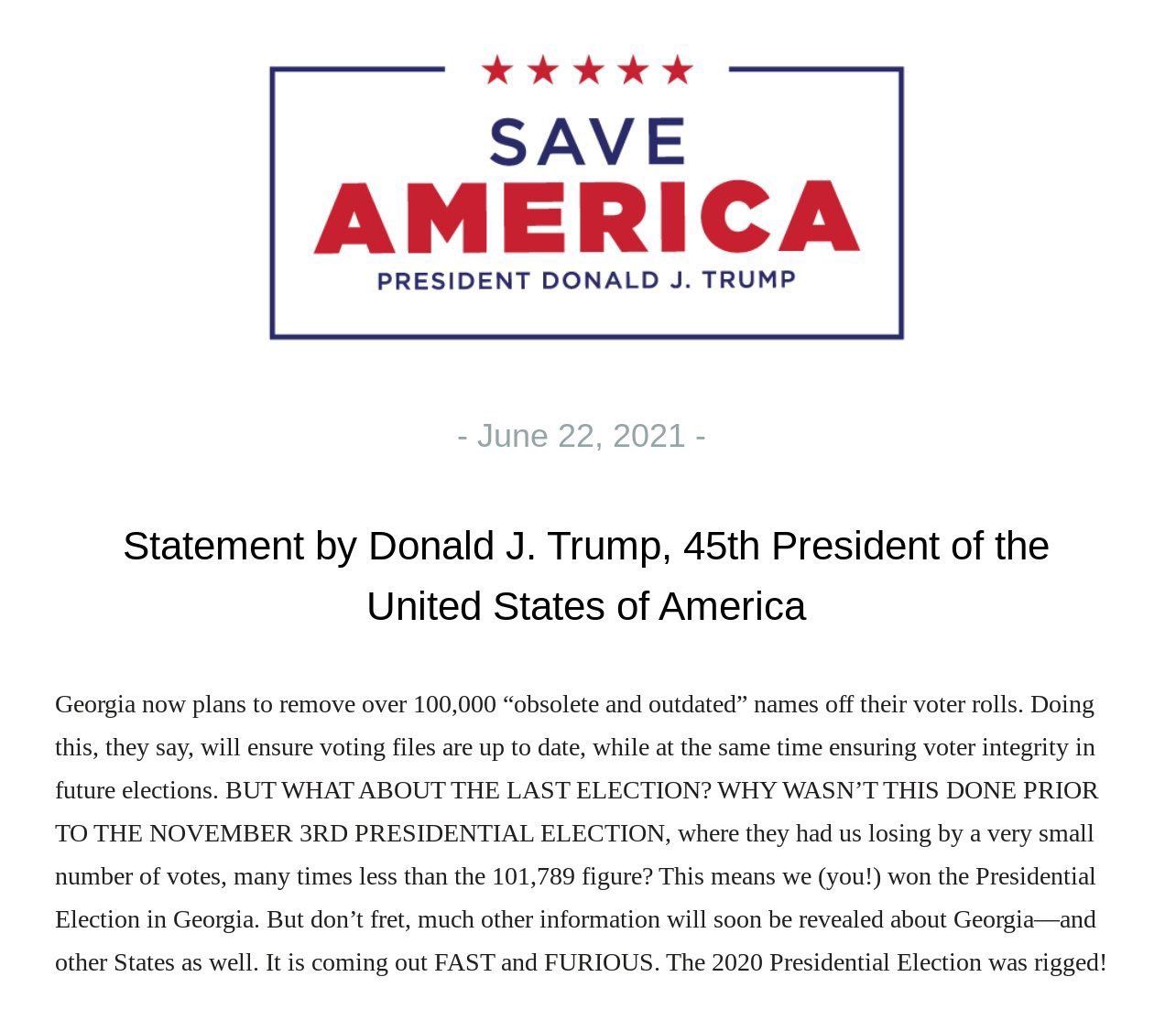 Mark Niesse, a reporter for the Atlanta Journal-Constitution, succinctly broke down the misinformation in Trump’s statement.

It really is that simple. The 100,000 voters that Trump is complaining about are only being purged because they failed to vote in the last two general elections. His implication that they are illegitimate voters who voted this past cycle and stole his win from him is completely false.