Conservative extremists have elevated Ayn Rand-style selfishness to the status of a religion that somehow competes — yet comfortably co-exists — with the evangelical Christianity whose Bible contains scriptures extolling a values system of the golden rule and a life of communal love and peaceful co-existence.

Perhaps no recent trend exemplifies this as well as the explosion of anti-vaccination sentiment that has become a point of pride within the Maga world.

Seemingly the very concept of protecting both yourself and your neighbors from a deadly pandemic for the good of all has become a political flashpoint threatening to extend the pandemic as new and more dangerous variants of the COVID-19 virus mutate and spread among the fearful, conspiracy-prone unvaccinated.

Of course, these temporary libertarians when it comes to putting newly developed vaccines in their bodies are the same people who have no problem regulating what women do with their unplanned pregnancies as their vision of rights and freedoms apparently only apply to allowing them to do whatever they want, without reciprocal consideration for the rest of society.

To give you an idea of just how agitated these paragons of extreme self-interest can get, one simply needs to tune into Fox News, that hub of anti-vaccine sentiment and a media organization that is likely to blame for a good proportion of COVID-19 deaths and illnesses in this country on account of its role in politicizing the simple public health measure.

Take the appearance of Charlie Kirk — the conservative activist and radio host who co-founded Turning Point USA to spread his heinous right-wing ideology to high school and college students — on the airwaves of Tucker Carlson’s program on Fox News.

Carlson, who has been ranting about the tyranny of vaccines in between playing the victim of NSA surveillance, hosts a program that was the perfect venue for Kirk to rage against the infringement of his personal freedoms that vaccination efforts like President Biden’s proposal to send government health workers door-to-door to increase our country’s flagging vaccination rate.

Perhaps cognizant of the fierce blowback that hit Congresswoman Marjorie Taylor Greene when she compared mandatory vaccination regulations to Nazi policies during the Holocaust, not just once, but again after she so profusely apologized for her initial comparison, Charlie Kirk chose another morally repugnant system of government oppression to use as his reference point: South Africa’s system of apartheid during that country’s years of all-White rule in a majority Black nation.

The folks who saw that video clip on Twitter rushed to pile derision and mockery on the Turning Point USA founder.

No they don't actually agree with that. They just think it will make them sound "reasonable." They are truly nihilists and say what gets them money and power because those are the only things they truly believe in.

Charlie Kirk compares everything to Apartheid. He has a tiny playbook.

I'm sure we could find an island for them…
"The Ruins of Chacachacare Island Part 1 | by Josh Lu | Medium" https://t.co/yGleVM824T

Underrated Tweet no matter how many likes it gets 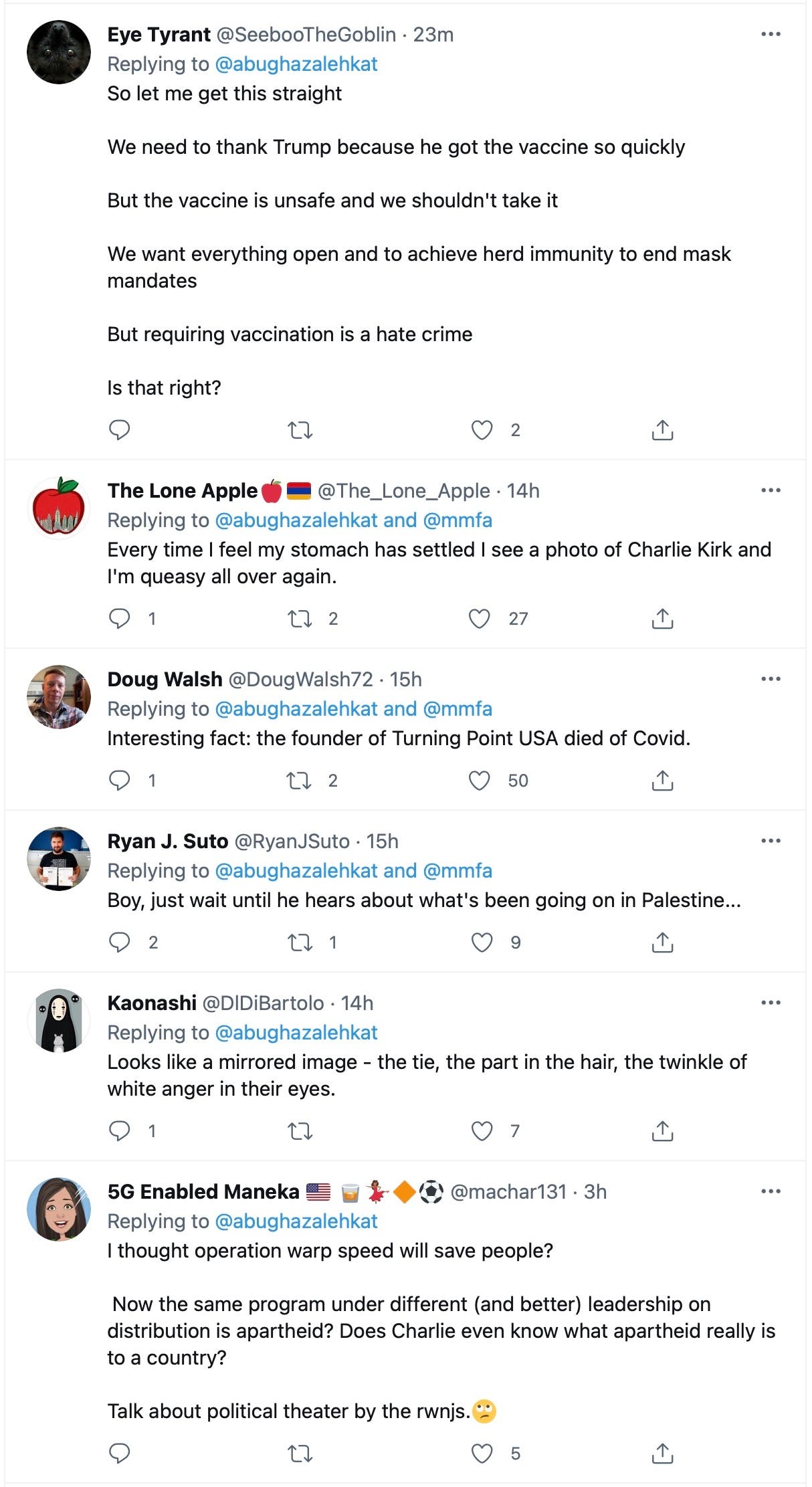 Apparently, Charlie Kirk’s radical take on the tyranny of vaccinations is not being received as well as he would have liked, at least not on Twitter.

Unfortunately, the low-information viewers of Fox News may actually believe the claptrap Kirn angrily spews on Tucker Carlson’s program, then avoid getting vaccinated, prolonging the pandemic to the detriment of the health of the very people who take his advice and of the nation’s economic recovery.

To quote Steely Dan, in regards to Charlie Kirk’s anti-vaccine rhetoric, “only a fool would say that.”