Politicians like Congresswoman Lauren Boebert (R-CO) used to hide their brutal libertarian ideology from wide public view, at least when it came to the most popular social services like Medicare, Social Security, and firer and police protections.

Now we are in a different era, however, with right-wing extremist Republicans seemingly in a race against each other to prove their MAGA bona fides by racing to the bottom of an ideology that rejects any government assistance as dangerous socialism — as if the general welfare of any of our nation’s citizens (besides themselves, of course) was as insignificant as a disposable plastic bag.

Of course, anyone who is aware of the destruction of the earth’s marine environment by the accumulation of discarded plastic waste knows that plastic bags are anything but insignificant, and the millions of Americans who have dutifully contributed to their Medicare and Social Security funds all these years are equally aware that our society depends deeply on these valued government programs despite what politicians like Boebert may say.

While other GOP radicals have been careful not to say the quiet part out loud, preferring to fight ginned-up culture wars than reveal how they would actually govern, Rep. Boebert foolishly stepped on the third rail of retail politics yesterday in her appearance at the Conservative Political Action Conference (CPAC) in Texas.

Amazingly, while presenting her bleak and extremist vision of what a Republican-controlled U.S. government would implement in their policy prescriptions, Boebert drew cheers from the crowd of conservative tastemakers at CAPC for her declaration of non-interdependence and radical self-reliance.

Naturally, outside of CPAC, the response to Boebert’s unilateral decision that America needs to strip the government’s social safety net away from its most needy citizens was met with a less enthusiastic response.

Congresswoman Alexandra Ocasio-Cortez (D-NY), the progressive arch-nemesis of GOP extremists like Reps. Boebert, Greene, Gaetz, Gosar, and too many others, mocked the gun-toting Colorado lawmaker’s speech with a satirical post praising her “good ol conservative values.”

Others wondered how the current recipients of federal government largesse would take Boebert’s prescription of tough medicine and every person for themselves attitude.

Republican congresswoman wants to end VA healthcare, VA disability payments and the GI Bill for America's veterans. Can't wait till the vets in her district find out! https://t.co/xIbXHe5HjR 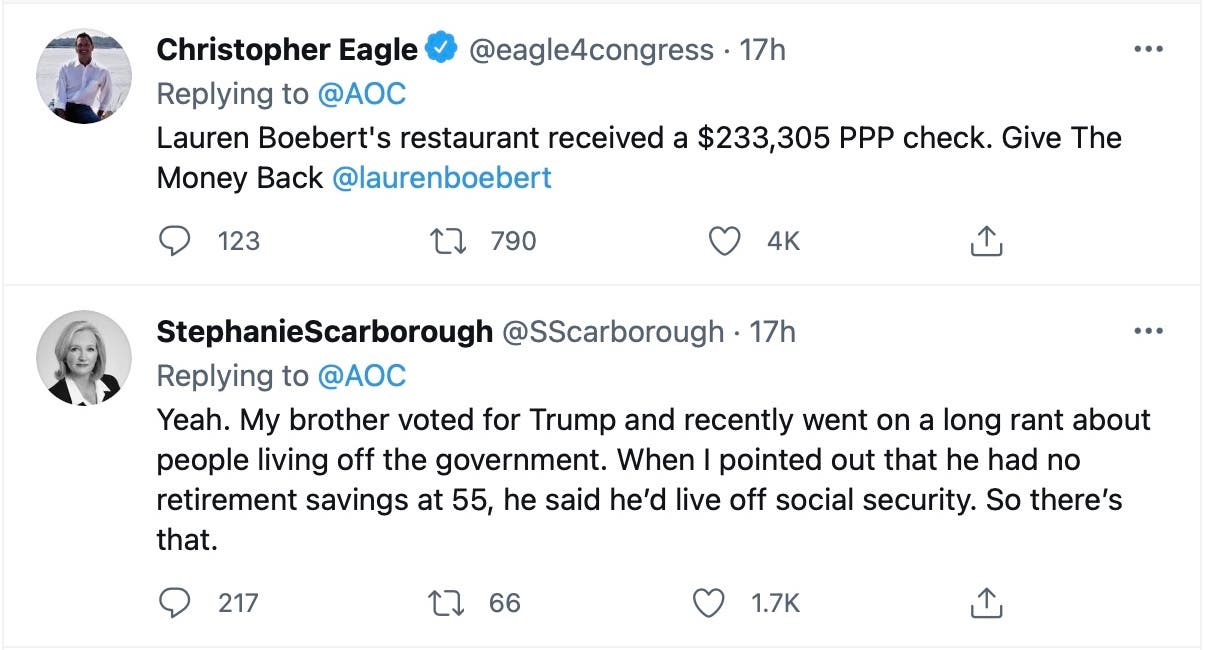 GOP wants to repeal the rescue plan and take back your 1400$ checks. https://t.co/GEd5pv3Kzd

Her exact words: “I wish more members of Congress had the life experiences that I’ve had,” she said. “I’m living the American dream. I came up from welfare, standing in line waiting for government cheese to now running for Congress.” The damned hypocrite.https://t.co/LbI33nBjBf

So her entire political platform as well as her life in general is built on lies. How Republican.

There was a time when politicians tried to model themselves on brave, well-spoken adults in politics.

@RepBoebert @laurenboebert is so stupid. If she doesn't want government money, she should resign from Congress and return any PPP money and stimulus money she received. Please tell your followers to do the same #KarenBoebert. I'm so tired of Republicans and their hypocrisy. pic.twitter.com/7ZC1RzQHMV

Don't forget Missouri, Mississippi, Georgia, Alabama,Arkansas I could keep going but you get my drift.

So all the GOP-voting pensioners gonna hand back their Social Security and Medicare funds, right? RIGHT? https://t.co/DhneQKitSD

While it’s likely that most Americans would recoil in horror when asked to give up the popular and often life-saving government benefit programs, Congresswoman Boebert doesn’t seem to care as long as she continues to be the flavor of the month among the MAGA crowd and continues to have fundraising dollars pouring into her own coffers.

Thanks to CPAC, America can see the consequences of electing unqualified ideologues to Congress: a serious threat to our social safety net coming from a right-wing extremist with no concern for the welfare of anyone except herself, emulating the narcissism of Donald Trump in an unholy tribute.

She must be defeated before she can spread her pernicious ideas any further.