The audacity of Republican lies grows ever more outrageous with each passing day.

Politically entrapped by the perceived necessity to support Donald Trump’s “big lie” about election fraud supposedly being the only reason for his massive defeat by Joe Biden in last November’s presidential election, even many members of the GOP who may have been counted among the more sane and moderate lawmakers in their fractious caucus are now spouting factually ludicrous statements that defy belief and common sense.

Rising GOP luminary Congresswoman Elise Stefanik (R-NY) — a legislator who benefited from the House Republican leadership’s decision to punish her traditionally conservative colleague Representative Liz Cheney (R-WY) for her refusal to acknowledge Trump’s self-serving fictions by snagging the number three position in that leadership after Cheney’s ouster — is the latest formerly middle-of-the-road Republican to venture into an alarming display of grandstanding prevarication.

Speaking at a press conference outside the Capitol Building on the day that the House’s select committee investigating the January 6th insurrection began its first day of hearings, Rep. Stefanik made a claim so counter-intuitive as to be completely laughable were it not so much an emerging viewpoint among so many deluded supporters of the former president.

“The American people deserve to know the truth,” Stefanik declared. “That Nancy Pelosi bears responsibility, as speaker of the House, for the tragedy that occurred on Jan. 6.”

Talk about blaming the victim!

As manic insurrectionists occupied the House Speaker’s office and ransacked it, spread excrement on the walls of the Capitol Building, and erected makeshift gallows on the grounds swarming with angry Trump fans to effect their version of frontier justice, Congresswoman Stefanik chooses to ignore the rabble-rousing by the then-president and his loyalist GOP  cronies and pin the responsibility for the violence on the person that the crowd was intent on harming.

Stefanik’s logic may appeal to those whose sympathies lie not with democracy, but with the authoritarian-minded insurrectionists.

In her mind, since Nancy Pelosi appointed the House sergeant at arms — a member of the Capitol Police Board that oversees the U.S. Capitol Police during the Jan. 6 insurrection — then the force’s failure to prevent a breach of congressional security was entirely the fault of the House Speaker, despite the fact that she has no involvement in the day to day operations of the security apparatus.

Of course, one could use that same logic of “the buck stops at the top” to lay blame for countless atrocities at the feet of Donald Trump, from separating refugee families and caging immigrant children to war crimes such as the illegal assassination of a top Iranian general, but logic is not the point here.

Republican lawmakers like Stefanik and the others gathered outside the Capitol today are seeking to discredit the select committee’s investigation and shift blame likely because the outcome of the inquiry will not be favorable to their party and its political future.

The social media response to Rep. Stefanik’s misattribution of responsibility was swift and fierce.

Every DC reporter should repeatedly ask Stefanik, Scalise and McCarthy one question:

If January 6th was all Pelosi's doing, then why did the @GOP vote against a bi-partisan investigation that would reveal it? 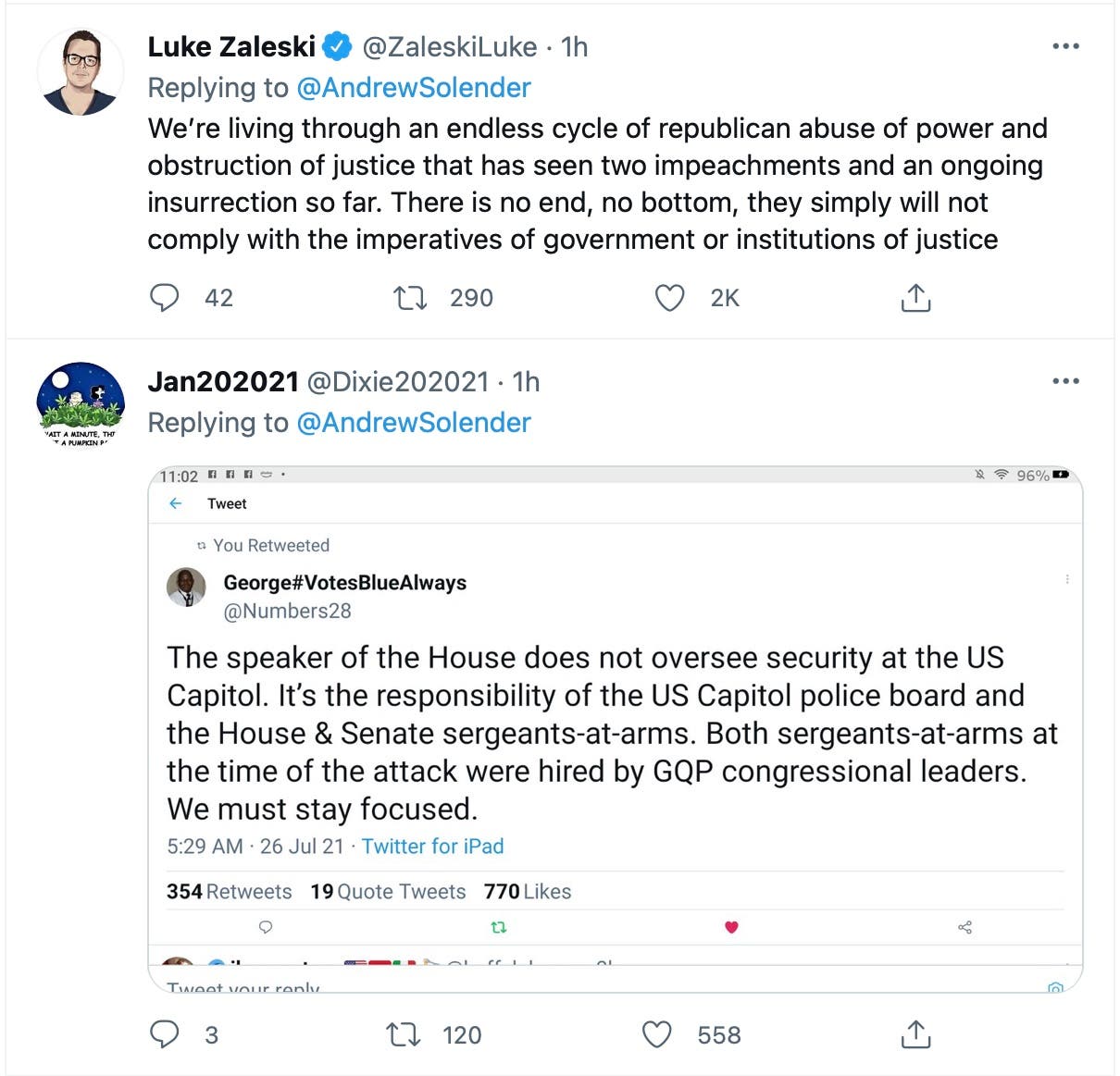 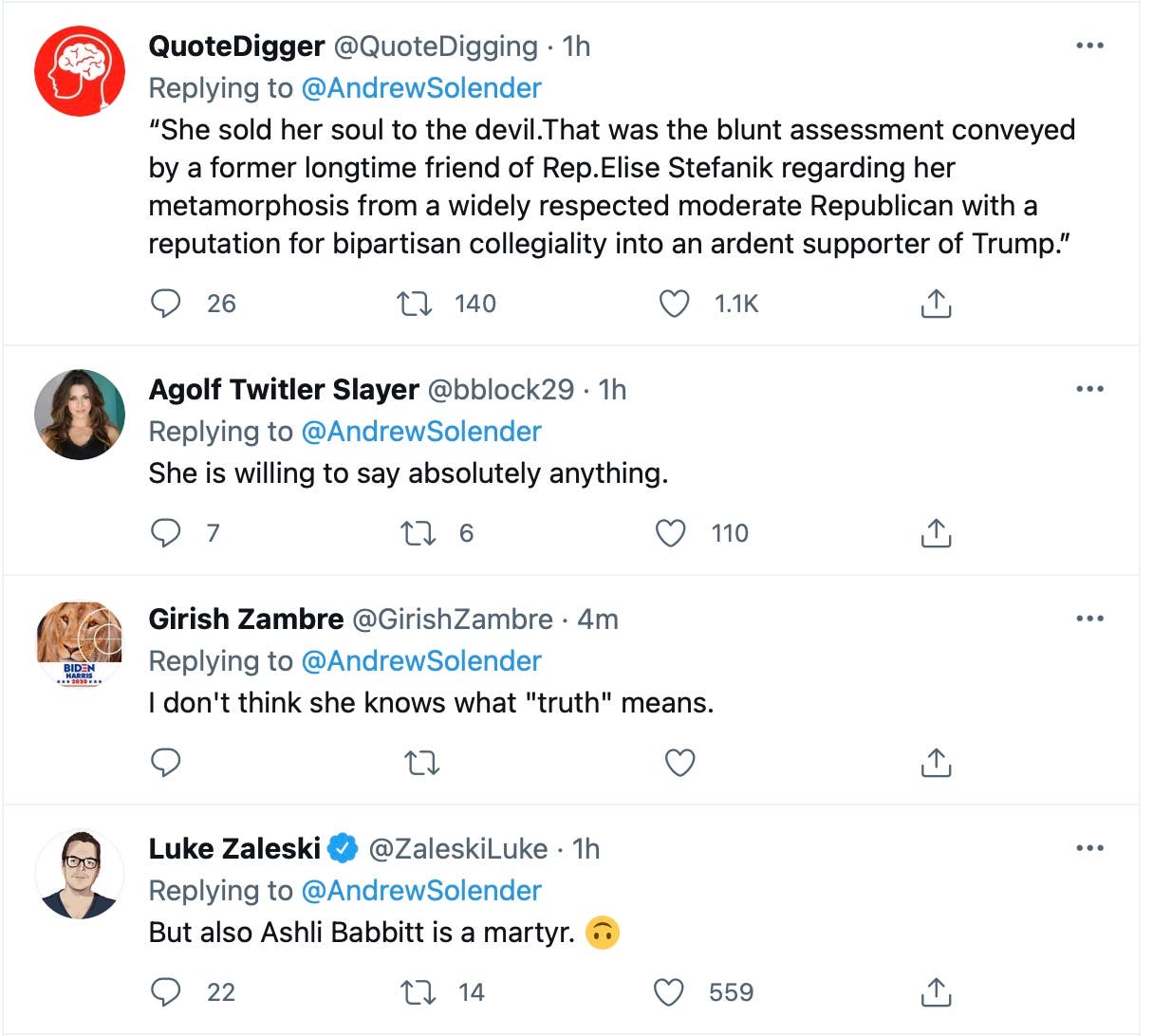 That was BEFORE he took a couple of trips to MarALago

She is not able to listen to the testimonies, or she would have to admit what a liar and traitor she truly is!

Gawd, I can’t imagine that level of blind ambition, to sell your soul & to sell out your country.

Anyone with any sense whatsoever simply should ignore anything that emanates from the mouth of Congresswoman Elise Stefanik or any of the other like-minded GOP apologists for the insurrectionists.

How they can continue to shamelessly attempt to shift blame is both pathetic and simply not credible. They should all be driven from office at the earliest available opportunity.