Cut off from his old social media outlets, Donald Trump has been reduced to getting his deplorable messages out through press releases and call-ins to right-wing media outlets.

He is even willing to ignore his frequent frustration with Fox News for being insufficiently supportive of his antics to utilize their airwaves to rile up his base against his pet peeve of the day, which usually consists of some ill-considered take on whatever he thinks will damage the Biden administration the most in any given moment.

Trump’s call with Dan Bongino on his Fox News program last night was typical of his current media strategy.

With nothing constructive to say about the dilemmas currently facing our nation — many of which Trump himself was directly involved in creating — the twice-impeached ex-president instead engaged in a series of riffs on his discredited views about the burning topics of the day.

The latest wave of the COVID-19 pandemic — powered by the delta variant of the virus that may never have developed had Trump approached the pandemic seriously during his tenure rather than claiming that it was a hoax that would disappear as soon as hot weather appeared — was one of the topics that the former guy insisted on pushing his misinformed opinions about as he spoke with Bongino and suffice it to say that, as usual, Trump made it all about himself.

After being asked about the resurgence of COVID-19 currently ravaging the nation and accompanying controversy about the proposed renewed mask and social distancing mandates, Trump pointed fingers at the Biden administration and claimed against all evidence that he would be doing a better job, despite failing miserably at the task when he was in office.

“Well, first of all, could you imagine if I were president right now and we had this massive attack from the coronavirus, you know, now they like to call it, they have new names and they have other new names, but it’s exactly what we had, we had the same thing,” Trump claimed. “If that were me, they would say ‘what a horrible thing, what a horrible job.’ These are numbers in some cases that are equivalent to what it was, but we don’t hear that.”

“I think I have to be a big vaccine fan because I’m the one who got it done so quickly, we got it less nine months, it was supposed to take five years. They would have never even gotten it done so I am a big fan. At the same time, I’m a fan of our freedoms and people have to make that choice for themselves and I would recommend they get it and get it done and they’re being protected and the vaccines turned out to be a tremendous thing and I also though feel strongly here are some people who do not want to do it and I really believe in somebody’s choice, somebody’s freedom and that’s the way it is,” he said, trying to claim credit for the vaccine while avoinding the alienation of his anti-vaxxer base.

Trump still apparently fails to see the connection between his own bumbling efforts against the virus that led to its extensive spread and the development of the mutations that resulted in the more contagious variety of COVID that is now increasingly devastating the country.

Social media had a field day with Trump’s latest bloviation.

‘Could You Imagine If I Were President Right Now" OK let's stop right there. pic.twitter.com/QaWFu250SV

And a whole heaping help of lies.

I have to congratulate you on you’re fantastic tweet, “the grim reaper” and merchant of death. You were being generous to him but what a zinger.

We remember if he can't pic.twitter.com/dz7WD6bo3b

And that was before delta or any variants 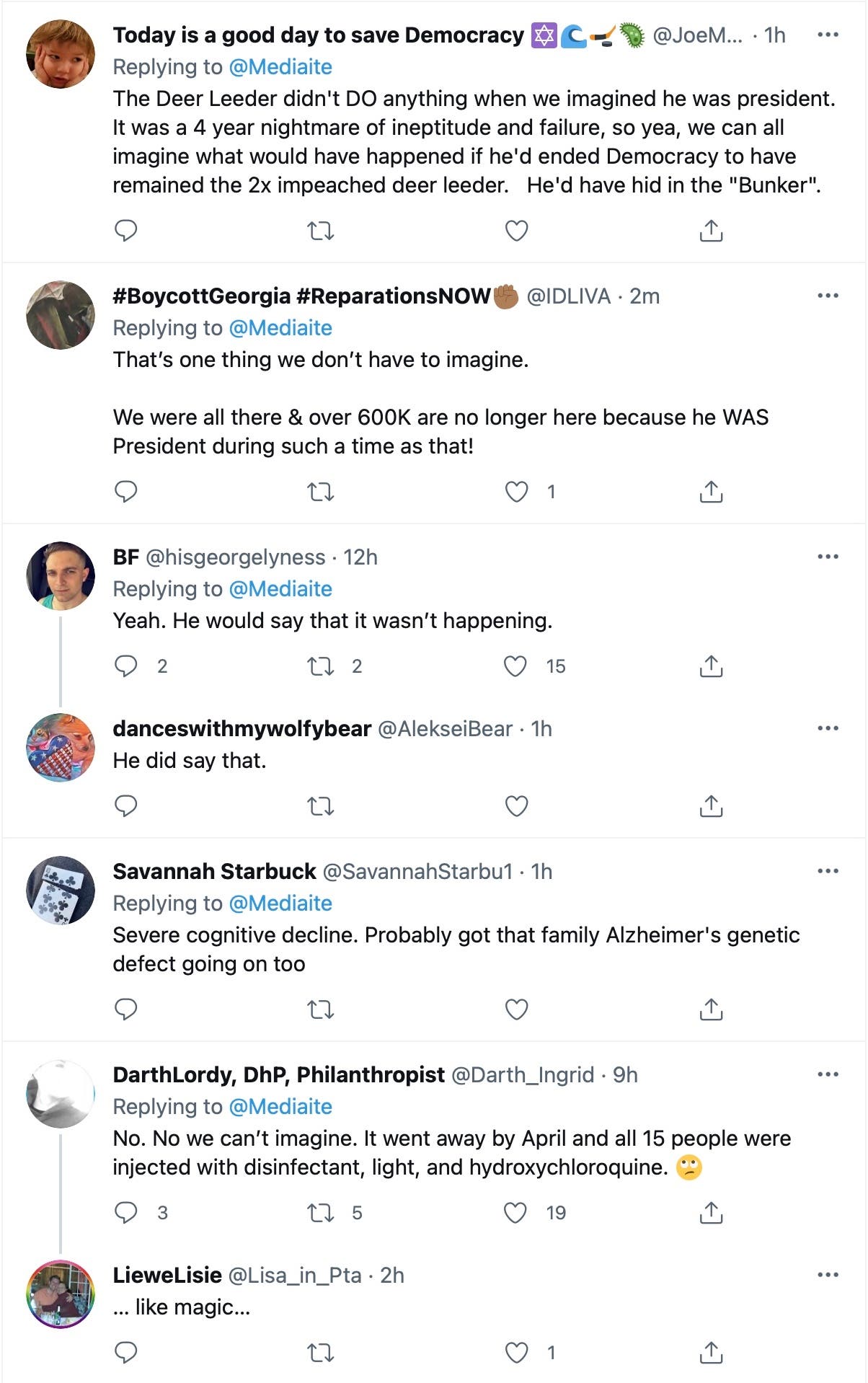 You’re obviously not doing MAGA math which is take that 600,000 multiply it by zero and then pretend it never happens.

If we could only imagine Trump's response…. pic.twitter.com/Vf4IbozlUy

Of course, it is in Trump’s best interest to distract the media with his attacks on the Biden administration and his totally discredited claims that he would be doing so much better if he were still president.

Any time talking about his comments takes attention away from the multiple investigations into his criminal behavior which will hopefully soon bear fruit in the form of a formal indictment.

Take the man off the television and put him in prison where he belongs.

In the meantime, you can watch Donald Trump’s interview with Dan Bongino in the video below.