Trump blasts out enigmatic, all caps, three-word statement about bullies

As the responses begin to pour in to the bombshell news that New York Democratic Governor Andrew Cuomo would be resigning after a state investigation confirmed the allegations of his sexual harassment of female staffers in Albany, some of the gloating social media messages from opposition Republicans are drawing harsh accusations of massive hypocrisy.

Tops on the list of people who should know better than to comment on Cuomo’s resignation due to their own dirty laundry is the extremist congresswoman from Rifle, Colorado, Rep. Lauren Boebert (R-CO).

Boebert drew outraged responses on social media after posting this tweet after the news of the New York governor’s inevitable decision to step down became public.

One less pervert in government.

Goodbye Cuomo! Keep your hands to yourself, creep!

Many people felt that any person who continues to support Donald Trump — who faces extremely credible accusations of much worse behavior than Cuomo has been confirmed to have engaged in — and whose own husband was arrested in 2004 for exposing his penis to two teen girls at a bowling alley, has no right to make comments about the Democratic governor’s personal failings.

The replies to Congresswoman Boebert’s judgemental tweet displayed outrage at the right-winger’s extreme hypocrisy that stemmed from her failure to condemn similar behavior among her GOP colleagues. 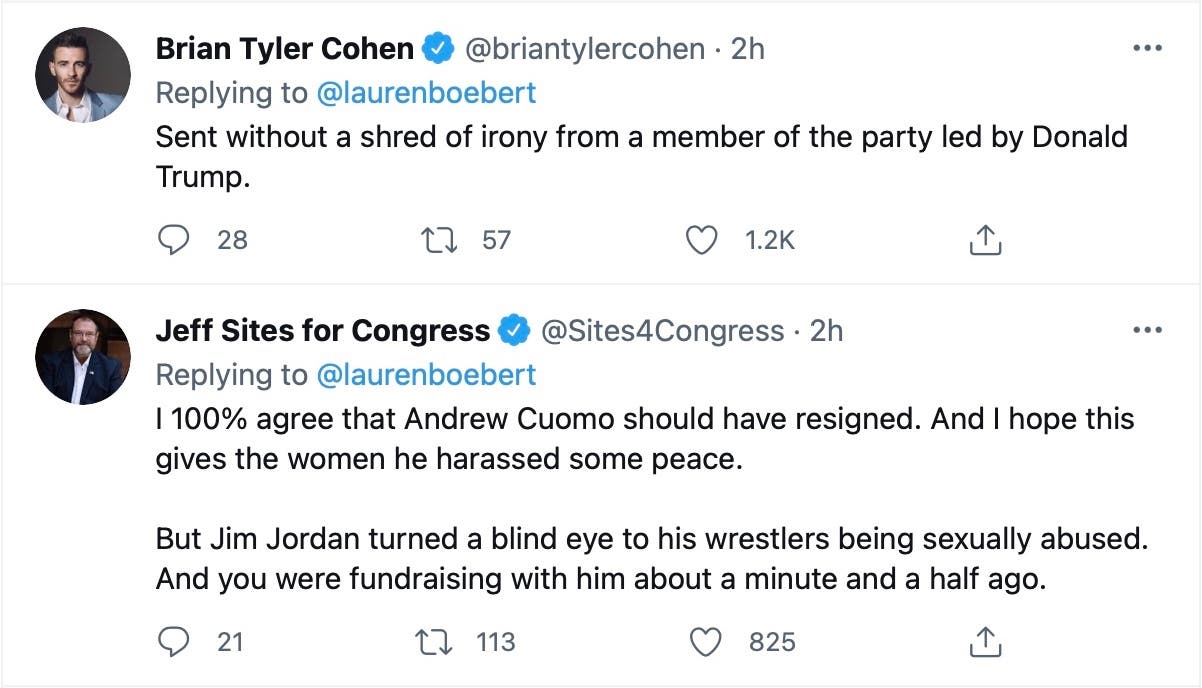 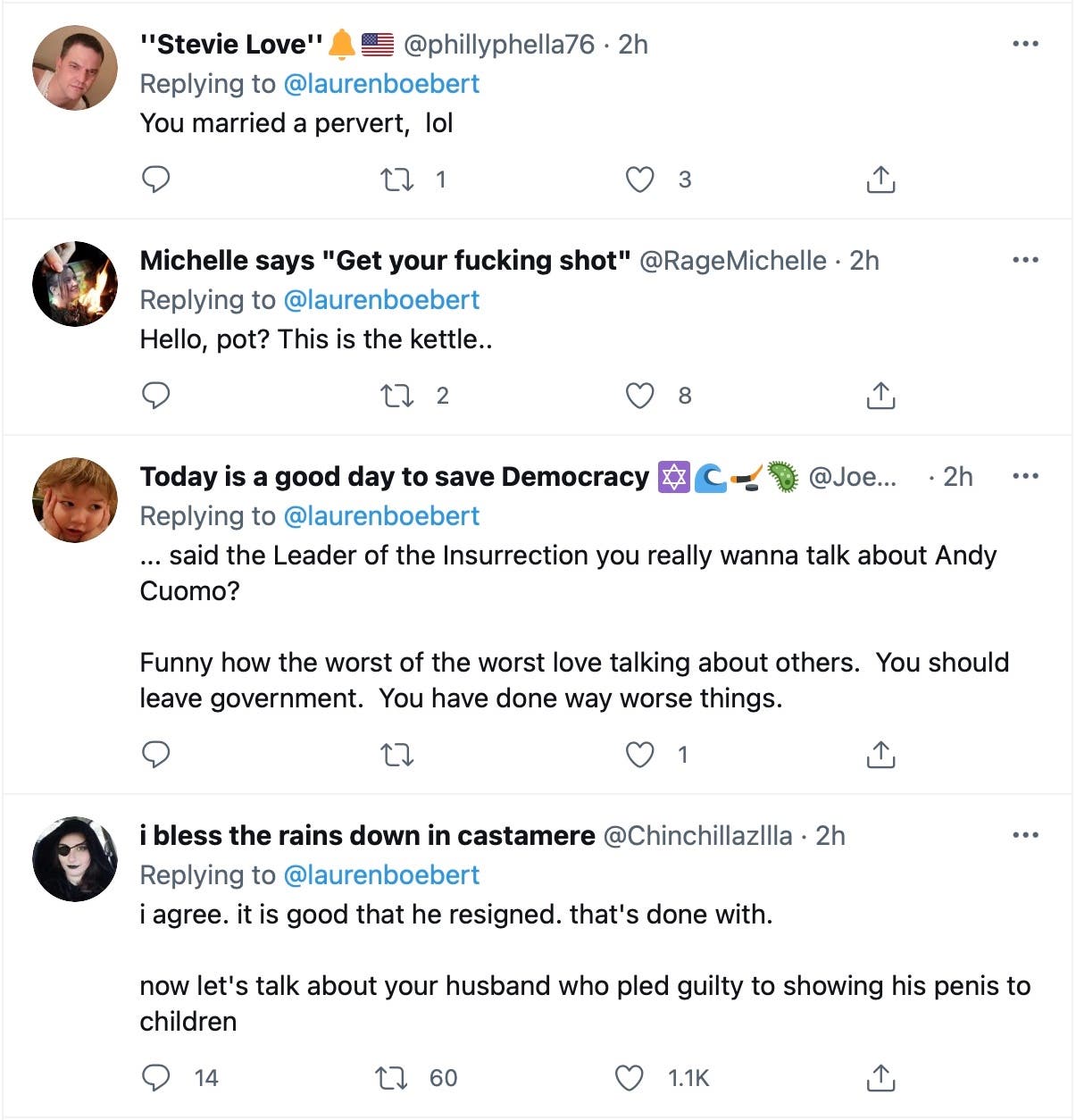 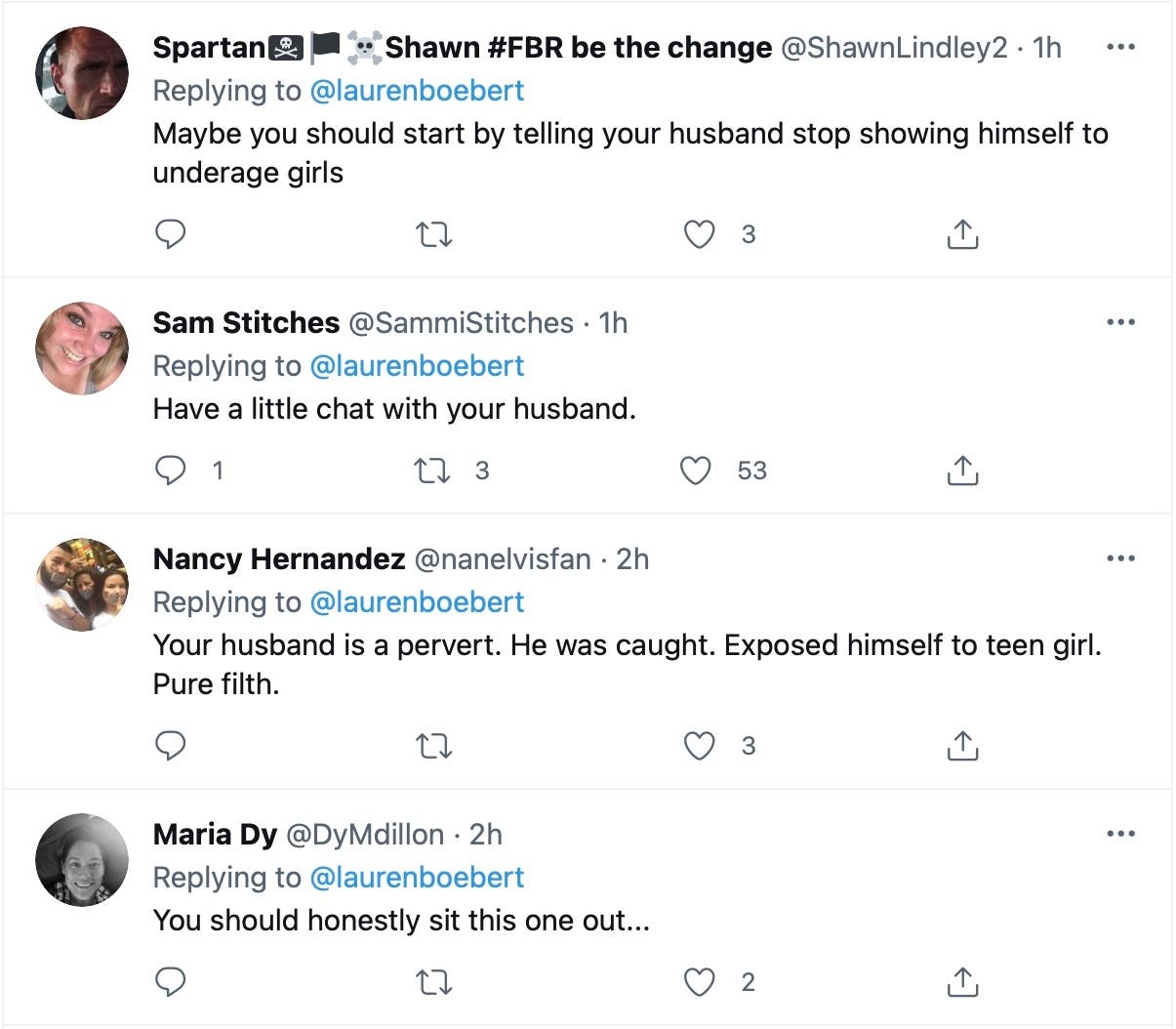 So Lauren, How’s Hubby, has he been arrested for exposing himself lately https://t.co/hWBGsoEe6u

Amen, and this has been for decades…. 5 kids, 3 diff moms….left all of his relationships with kids on the heels of an affair.
Track record is not great.

What? She lied? Shocking.

Thanks for once again proving my chart is true: pic.twitter.com/1UfmmaPZm1

Unfortunately, a lot of decent, common-sense things are strange to Lauren Boebert.

It is seemingly incomprehensible to clueless GOP politicians like Rep. Boebert that a prominent figure like Cuomo would be shunned by their own party after his scandal was revealed.

For transactional Republicans like Boebert and her ilk, morality is tied to political affiliation rather than being a fixed compass for ethical behavior.

All the more reason that Boebert and the others like her must be condemned and driven from office as their putative leader, the even more scandal-plagued Donald Trump, has been.