Rep. Marjorie Taylor Greene (R-GA), infamous spreader of conspiracy theorists and MAGA fanatic, has been suspended from Twitter for a week over an antivaccine tweet she recklessly posted on the website yesterday. The woman known as the QAnon Congresswoman has long been known for spreading dangerous misinformation—oblivious or uncaring to the fact that her lies are likely to get people killed—but she clearly crossed a line with this latest stunt.

In her tweet, Greene incorrectly stated that vaccines are “failing” and that the FDA should not approve them. She blatantly lied by insisting that vaccines and masks “do not reduce the spread of the virus,” a claim which flies in the face of all of the available science. With COVID-19 cases on the rise across the country, this is the last thing an elected official should be saying.

At this point, it’s impossible to tell if a Republican like Greene actually believes what she’s saying, or if she is simply pandering to the anti-science troglodytes who compose a not-insignificant portion of the GOP base. She knows this kind of rhetoric is popular with her supporters and might simply being weaponizing this ignorance for political gain.

It’s also entirely possible that Greene was trying to land herself a ban so that she can go on right-wing propaganda outlets and play the victim. Increasingly, “Big Tech” has become one of the Republican Party’s favorite bugaboos, and by claiming that she is being “censored” Greene will be able to paint herself as a crusader for the supposedly digitally oppressed.

Any way you break it down, this kind of tweet is inexcusable and Twitter’s decision to suspend her is understandable if perhaps unwise (given the way it is likely to further galvanize anti-vax sentiments among conservatives). 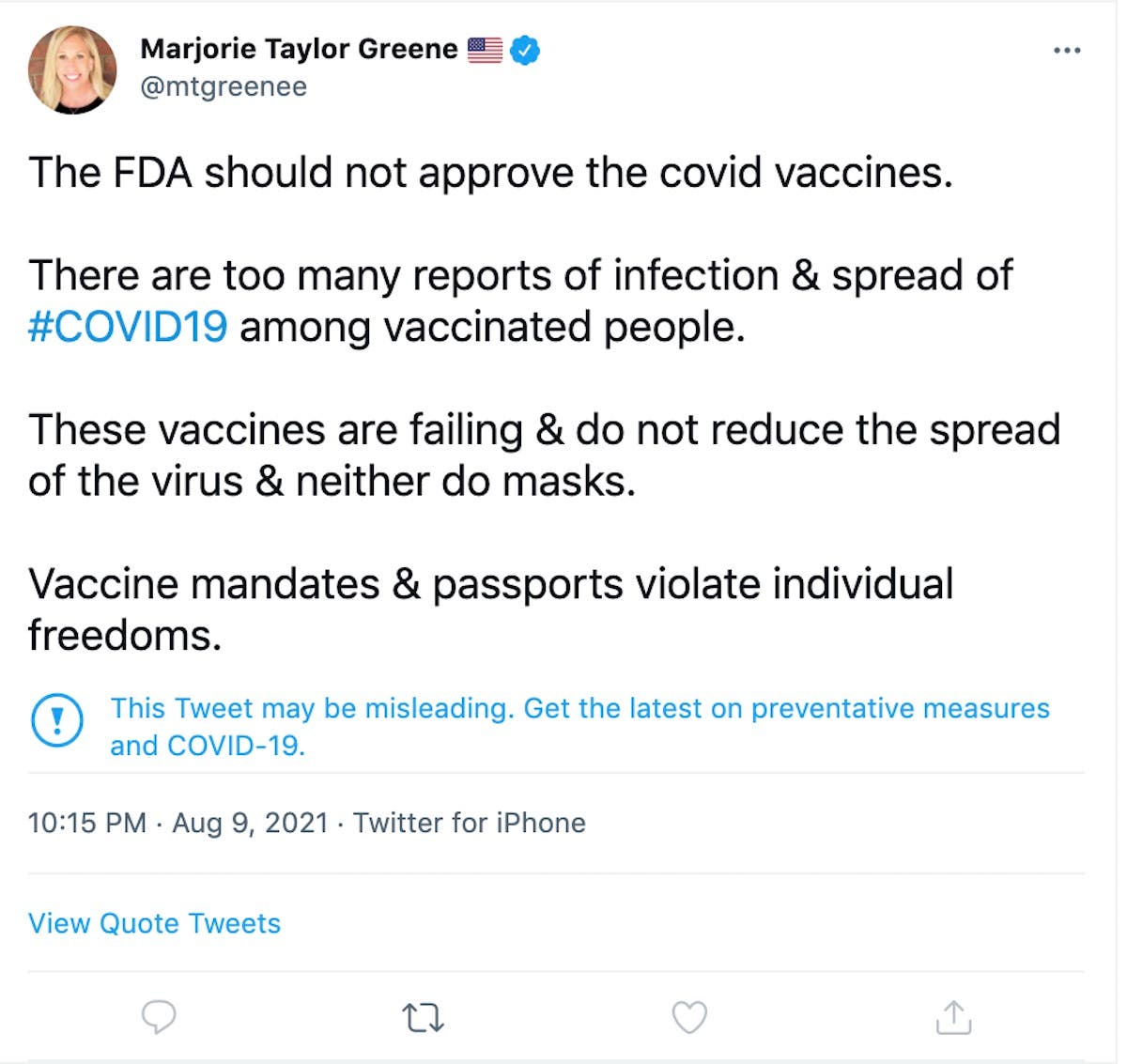 The Hill spoke to a spokesperson for Twitter who explained that Greene’s tweet “was labeled in line with our COVID-19 misleading information policy.” For a week her page will be “read-only mode” because she has repeatedly violated Twitter’s rules.

Greene has since responded to her suspension. She blasted out an email defending her coronavirus lies, fearmongering about “blood clots and miscarriages.” While blood clots may be an exceedingly rare side effect in some cases, there is absolutely no evidence that COVID-19 vaccines cause miscarriages. For Greene to suggest that vaccines cause such things is deeply irresponsible and is likely to lead to more deaths as her supporters refuse to get vaccinated.