Lonely Trump fishes for validation and attention with “MISS ME YET?” rant

Florida Governor Ron DeSantis’ press secretary is set to end her involvement with the Montgomery State’s Attorney’s office, who filed a nolle prosequi on criminal charges of violating an interim peace order to stay away from whistleblower Rebekah Jones who was the victim of the alleged crime.

In early June, Maryland prosecutors set a trial for July 13th according to a trial subpoena sent to Jones.

But an Assistant State’s Attorney canceled the hearing on July 7th according to encrypted messages I have reviewed from the complaintant’s experienced counsel, who expressed then that the state suddenly lacked enthusiasm for the case.

Without consulting Jones, the SAO’s office shifted the case in line for dismissal without a trial that took place today.

“It’s not in the case search now because it was nolle’d [dismissed],” said DeMarco, “but I don’t know who took it out and why.”

She is referring to the document embedded in the tweet below, which is a public record from the Montgomery County District Court.

Press secretary Christina Pushaw was accused of criminally violating a Maryland court order to cease contact with former Florida Department of Health geographer, Jones who accused her of cyberstalking activities and impersonating a federal employee.

In response to repeated requests for comment, Pushaw lied and prevaricated to avoid admitting that at one point, she may have faced serious criminal proceedings with a maximum penalty of 90-days in jail and a $1000 fine for the first offense.

The case was dismissed this morning from the court’s “Nolle Docket” on August 13th, 2021, in a Montgomery County district court just northwest of America’s capital, Washington D.C. Because the court system doesn’t have another way of designating a case, DeMauro explained, it called today’s perfunctory hearing a “trial.”

According to text messages before with Jones which she recollected events inaccurately at times from memory, and later clarified that she earnestly believed Pushaw was set to enter into a deferred prosecution agreement at the hearing today. But that turned out to be totally false. She still asserts that is what a State Attorney told her before the July 13th trial date. “Tomorrow is just a status hearing for Pushaw. They are making a deal with her for deferred prosecution,” said the whistleblower erroneously before publication continuing, “this is something that the state attorney’s representative told me.”

Jones later clarified that her original statement was based on a discussion with prosecutors soon after she got subpoenaed to appear at Pushaw’s trial when they said vaguely in July they were “settling the case.” She added that she was not contacted by prosecutors about their decision to dismiss the case. And the geographer pointed out that it was the prosecutors who brought the action over a month after the temporary order against Pushaw expired and the permanent order was denied, leaving her mystified why they later decided the evidence was insufficient.

Jones was unable to provide the discrete terms of the deferred prosecution agreement because there was no deal. But typically, such plea deals may include dismissal of the charges if the criminal defendant doesn’t break the law again or re-offend for a certain period of time.

In April, Rebekah Jones published a detailed, 80-page court submission about Pushaw’s stalking activities onto her blog. It alleged 62 unwanted contacts in the two days after her initial restraining order was issued on April 7th by a Maryland court and extended two days later.

Christina Pushaw is clearly upset by the facts of the case and often tweets vehement denials that she is facing a criminal charge. Often, she points to the court’s denial of Jones’ request for a permanent order against her on April 30th, as if that somehow canceled the criminal proceeding against her.

When this story was updated, she tweeted, “When Grant Stern has more journalistic integrity than the Miami Herald.”

However, when asked directly for a comment about the case last month on Twitter, Pushaw first said she didn’t reply to me, which is a lie.

Then, the Florida governor’s press secretary lied again, claiming that it was impossible for her to be arranged in Maryland on June 7th because she wasn’t present. She also prevaricated about the charge being related to stalking since both the misuse of an interactive computer service (aka cyberstalking) and more traditional physical stalking are two of the acts for which a civil “peace order” can be issued in Maryland.

A representative of the Montgomery State’s Attorney’s Office previously said counsel for Pushaw, Sharon T. Diamant, Esq., was in attendance that day in a six-minute phone call which I placed to the agency at 11:22 a.m on the morning of June 8th. But that was incorrect.

Public records indicate that Christina Pushaw was issued a criminal summons issued on June 8th, and her lawyer Diamonte accepted service in lieu of a personal appearance, according to a representative of the District Court of Maryland with access to the docket, which the state does not release. I requested a copy of the summons to her and dismissal documents, but the court only accepts written public records requests and only delivers documents via the U.S. postal mail with a self-addressed stamped envelope, so there won’t be anything more to report until next week, at the earliest.

Absent a waiver, the state of Maryland will not expunge a case that ends with nolle prosecution for three years.

Here are Christina Pushaw’s comments on the criminal charges she’s facing in Maryland: 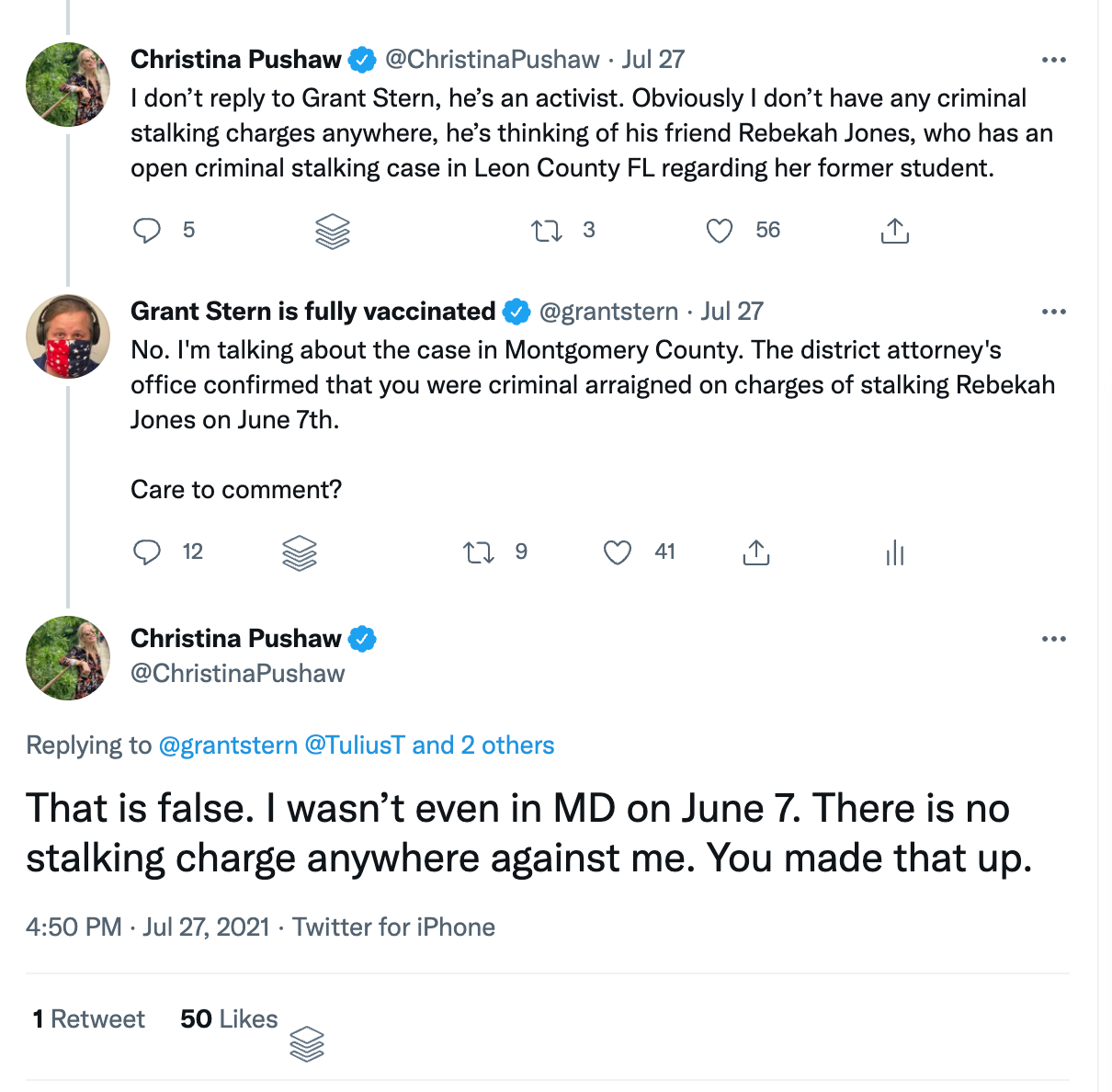 The original story is a developing story and was updated as events unfolded.

Update 1: The title has been adjusted from previously stating “DeSantis Press Sec. taking criminal plea deal for violating Rebekah Jones’ ‘restraining order’ after discussing the case with the Montgomery State’s Attorney’s Office. MSAO made a verbal representation that there was no written agreement to support prosecutors’ findings and said that Rebekah Jones’ statement that there was a plea agreement is false. Jones could not substantiate the phone call. Comments from MSAO Dir. of Public Affairs added. Amended to note, Pushaw does not face prosecution any longer. The August 13th hearing was heard on a “Nolle Docket” with the court. Original developing story disclaimer updated. Added information about expungement. Deleted references to arraignment after District Court clarified that Pushaw’s lawyer accepted service of a summons in lieu of arraignment, which contravenes the MSAO’s prior assertion that there was a June 7th hearing.

Update 2: Includes a copy of complainant Jones’ subpoena sent on June 8th for a July 13th trial date. Response and clarification from Jones regarding discussions with the prosecutor before the canceled trial date, her subpoena to testify, her attorney’s assessment of the case, her sincere belief that earlier quotes were accurate. Developing story disclaimer updated. Added Pushaw’s comment on Twitter after publication.