One of the spoils of a professional political class is a plum appointment to a federal agency or panel that can extend your lucrative government service even when your own party is out of power.

Typically, these appointments straddling administrations are uncontroversial, but in the wake of the attempts by the outgoing defeated incumbent president to stage an inartful coup attempt, the Biden administration is requesting the resignation of a number of prominent Trump administration officials who were named by the former president to sit on the Boards of Visitors of our nation’s military service academies.

These advisory boards, established by the Federal Advisory Committee Act of 1972, are designed to “inquire into the morale and discipline, curriculum, instruction, physical equipment, fiscal affairs, academic methods, and other matters relating to the academy that the board decides to consider, according to the web site of the West Point academy.

While members are appointed to three-year terms and only meet for the minimum of four times a year that the legislation establishing the advisory boards mandates, the Biden administration apparently now believes that it deserves to appoint people not actively working to undermine its agenda to these boards overseeing the education of the next generation of American military leaders.

Among the 11 former luminaries in the Trump regime that the current administration would like to see resign before being forcibly ejected from their positions are such well-known figures as former White House press secretary Sean Spicer, former senior counselor to the President Kellyanne Conway, and former national security adviser H.R. McMaster.

“The President’s objective is what any president’s objective is — to ensure you have nominees and people serving on these boards who are qualified to serve on them and who are aligned with your values. And so yes, that was an ask that was made,” Psaki told reporters.
“I will let others evaluate whether they think Kellyanne Conway and Sean Spicer and others were qualified, or not political, to serve on these boards, but the President’s qualification requirements are not your party registration, they are whether you’re qualified to serve and whether you’re aligned with the values of this administration,” Psaki added.

Biden’s request is certainly not unprecedented. Last November, only months before he was forced to leave office, Trump fired several long-serving members of the Defense Policy Board before their terms expired.
At least one of the advisory board members appointed by the former guy insists that he will not bow to pressure and will fight to serve out his full three-year term.
Trump’s former director of the Office of Management and Budget, Russell Vought, who was appointed to the Naval Academy’s board, tweeted a copy of the White House resignation request with the caption: “No. It’s a three year term. @White House”. 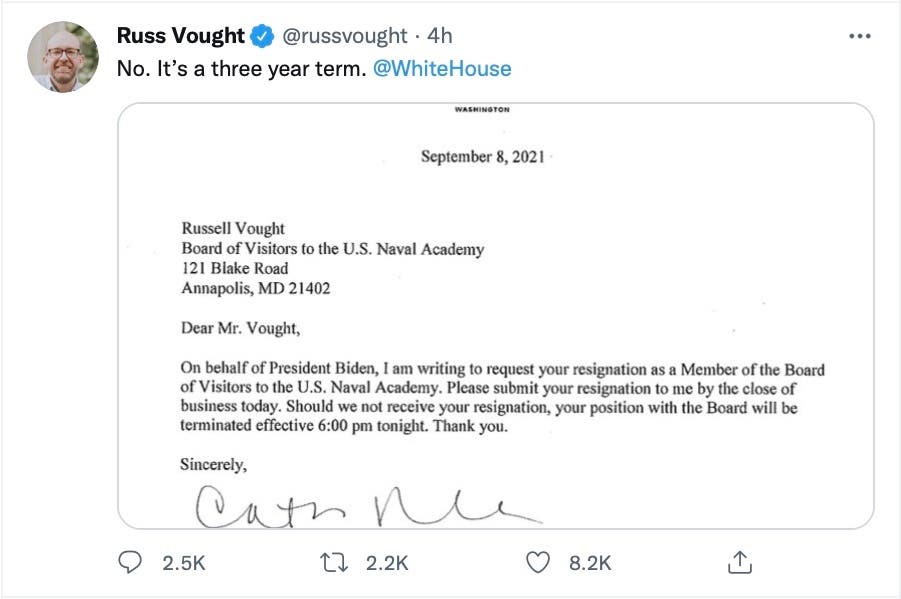 Kellyanne Conway also indicated in a Twitter post that she would not voluntarily resign from her appointment without a large amount of kicking and screaming.

Sean Spicer told CNN that he would be offering his own response to the resignation request on his Newsmax TV program, apparently hoping to wring out a few extra decimals for his ratings points on the show.
If anyone doubts the wisdom of removing these Trump appointees from the military academy advisory boards, perhaps they should examine some of the public comments made by one of them, retired Col. Douglas Macgregor, a former ambassador pick and Pentagon official with a history of controversial comments, including, according to CNN, disparaging remarks about immigrants, refugees, and minorities and the spreading of conspiracy theories that the Biden administration was replacing White people of European ancestry, a typical White supremacist trope.
Biden deserves to have people who support him and his policies sitting on military academy advisory boards. Given the rapidity with which Trump demanded the resignation of federal prosecutors whose integrity he thought posed a threat to his own administration, it’s hypocritical of any of his appointees to not expect the same treatment in return.
While numerous people on social media weighed in on this latest move by the Biden administration, one tweet perhaps sums up the public reaction as perfectly as can be expected.

Original reporting by Andrew Kaczynski and Em Steck at CNN.