It sounds like the title of an excruciatingly bad children’s book: Donald Trump and the “Two Big Firemen.”

Yet there it was in the headlines today, as the twice-impeached former president again indulged in some supposedly “truthful hyperbole” while recounting his experiences on the fateful day of September 11th, 2001 in New York City when the Osama bin Laden-directed terrorist attacks brought down the World Trade Center and killed thousands of innocent Americans.

Trump has never been shy about embellishing his accounts of that fateful day.

His oft-retold story about Muslims across the Hudson River from the twin towers cheering the collapse of the World Trade Center was thoroughly debunked by The Washington Post, and even his despicable boasting that one of the buildings he owns had become the tallest building in lower Manhattan after the WTC turned into a pile of rubble proved to be false.

Now, as the twentieth anniversary of the attacks approaches, Trump has come up with another improbable yarn related to that fateful day, and it is not one that paints a particularly flattering portrait of the man spinning it.

Trump, in an interview on the friendly right-wing extremist airwaves of NewsMax, is claiming — without any evidence — to have brought a large group of people to assist in the Ground Zero cleanup in the days after the tragic attacks when he suddenly became alarmed after hearing what he described as loud “creaks” coming from a still-standing building adjacent to the site of the former twin towers.

In Trump’s recounting of this previously unrevealed claim, he shouted “that building’s coming down!” and was quickly grabbed by two burly firemen who picked him up and rushed him to safety.

Trump appears to be adding to his 9/11 tall tales on Newsmax.

This time around he says that after he "heard creaks" coming from a building at Ground Zero, he told first responders "that building's coming down" — prompting "two big firemen" to grab him and move him to safety. pic.twitter.com/d0ivahZR9U

Whatever Trump may or may not have heard, any fears he may have had of the building’s imminent collapse proved to be unfounded, as the 50-story United States Steel Building at One Liberty Plaza remains intact to this day.

One imagines that the two NYC Fire Department employees who supposedly assisted Trump in his likely fictional account of his experiences back then could easily identify themselves and bask in the adulation of the MAGA hordes grateful for the rescue of their idol, but to date, no one has raised their hand to take credit, casting considerable doubt on the credulity of this particular self-aggrandizing favor.

Surely one could check the logs of New York City firemen’s medical records to see who may have required medical attention for strained backs from being forced to lift unusually heavy weights at around that time to help confirm the disgraced ex-president’s dubious story.

Social media treated Trump’s latest fable as just another one in a long legacy of lies. 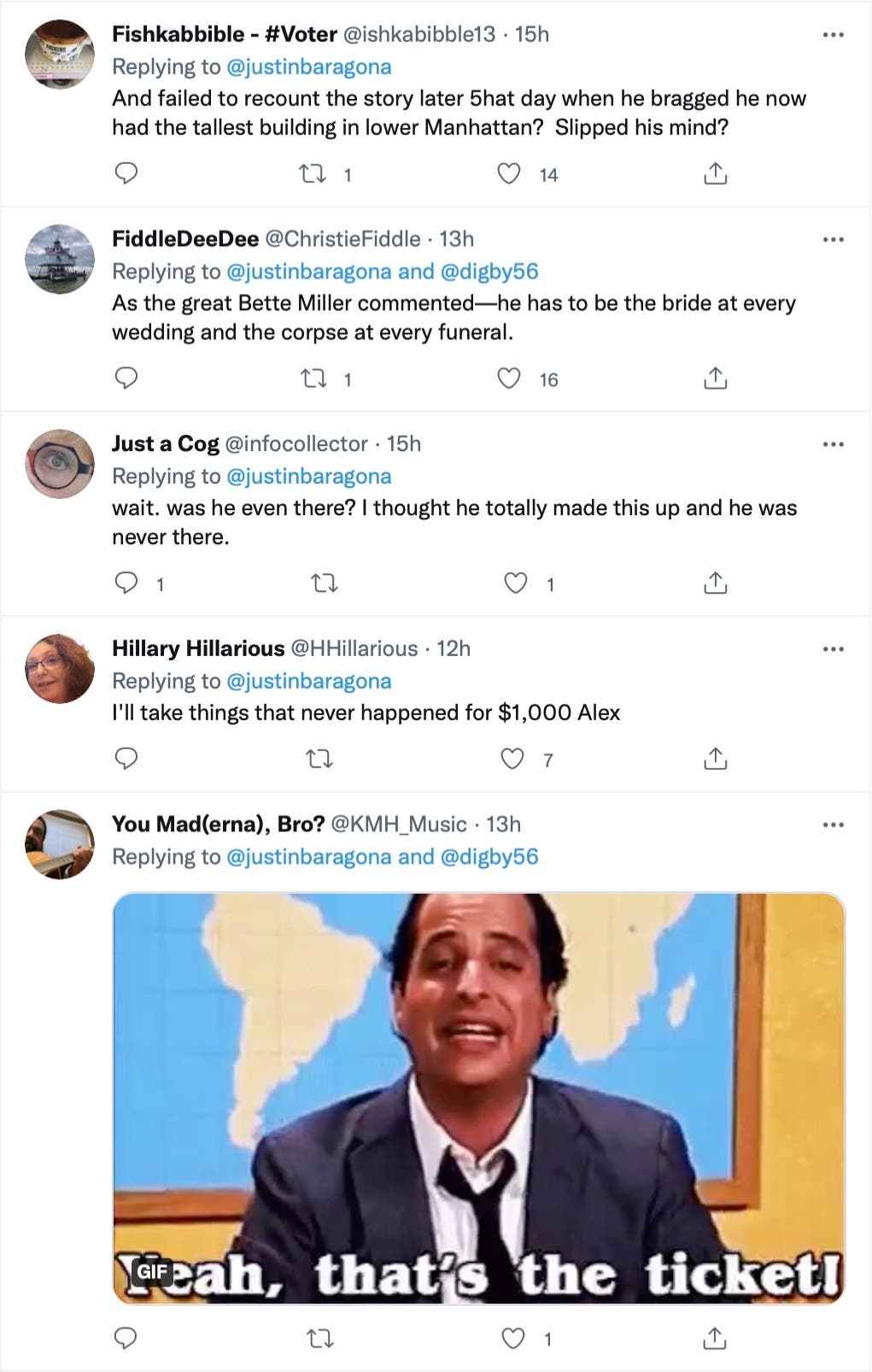 Looks like a large number of people refuse to accept the veracity of this latest claim from the most deceitful president in U.S. history. who has long demonstrated his attraction to big strong men (in addition to his penchant for political strongmen.)

Whatever the truth about what Donald Trump may or may not have done twenty years ago, one thing is certain: the former president and undisputed leader of the Republican Party will be spending the twentieth anniversary of the 9/11 disaster providing his unique brand of commentary to a professional boxing match.

If only he could make that his full-time career going forward, America would be a vastly safer and more peaceful nation.