What if they gave a protest and nobody came?

The much-touted “Justice for J6” rally at the Capitol was intended to bring teeming MAGA masses to Washington DC to protest the continued prosecution and incarceration of the violent insurrectionists who invaded Congress with murderous intent and a portable gallows on January 6th.

The fear that the event would bring even more disgruntled, misguided right-wing political activists and militia members back to the seat of the federal government inspired considerably more preventative measures than the original “Stop the Steal” rally that devolved into a raucous melee resulting in five deaths.

Heavy police presence and trucks moved into place as barricades outside Union Square in DC ahead of today’s ‘Justice for J6’ rally pic.twitter.com/TYuji3HA7a

Line of Metropolitan Police on bikes posted outside the Justice for J6 rally in DC pic.twitter.com/ZJl0Gybw34 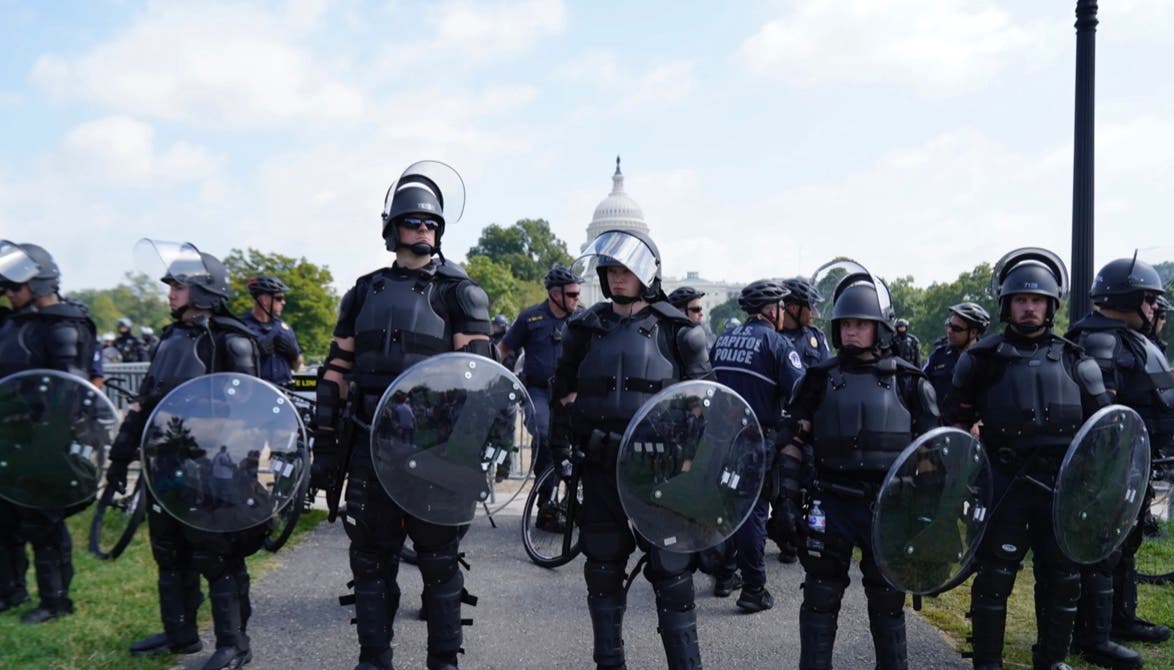 The extra fencing re-erected around the Capitol Building proved to be unnecessary after warnings from far-right groups that the event could actually be a “false flag” or a “government trap” suppressed turnout to the rally to embarrassing levels.

With more media and counter-protestors attending the rally than actual participants, the failure of the pro-Trump protest to attract any significant attendance is best demonstrated through pictures of the sparse crowd.

Arlington police are joining USCP at the perimeter around the reflecting pool. They donned full riot gear on as soon as the rally started: shields, batons, helmets and armor. Most people are sticking to the stage; only a few (mostly cameras) up at the barricades. pic.twitter.com/0wMpdzwjrF

Crowd of over a hundred out for the Justice for J6 rally as speeches begin, with even more press out covering here in Union Square pic.twitter.com/8YpSSNMcEp

Here you go. The full crowd turnout for the MAGA rally in DC today. More media than participants. From @BGOnTheScene pic.twitter.com/uf7Hnhuo24 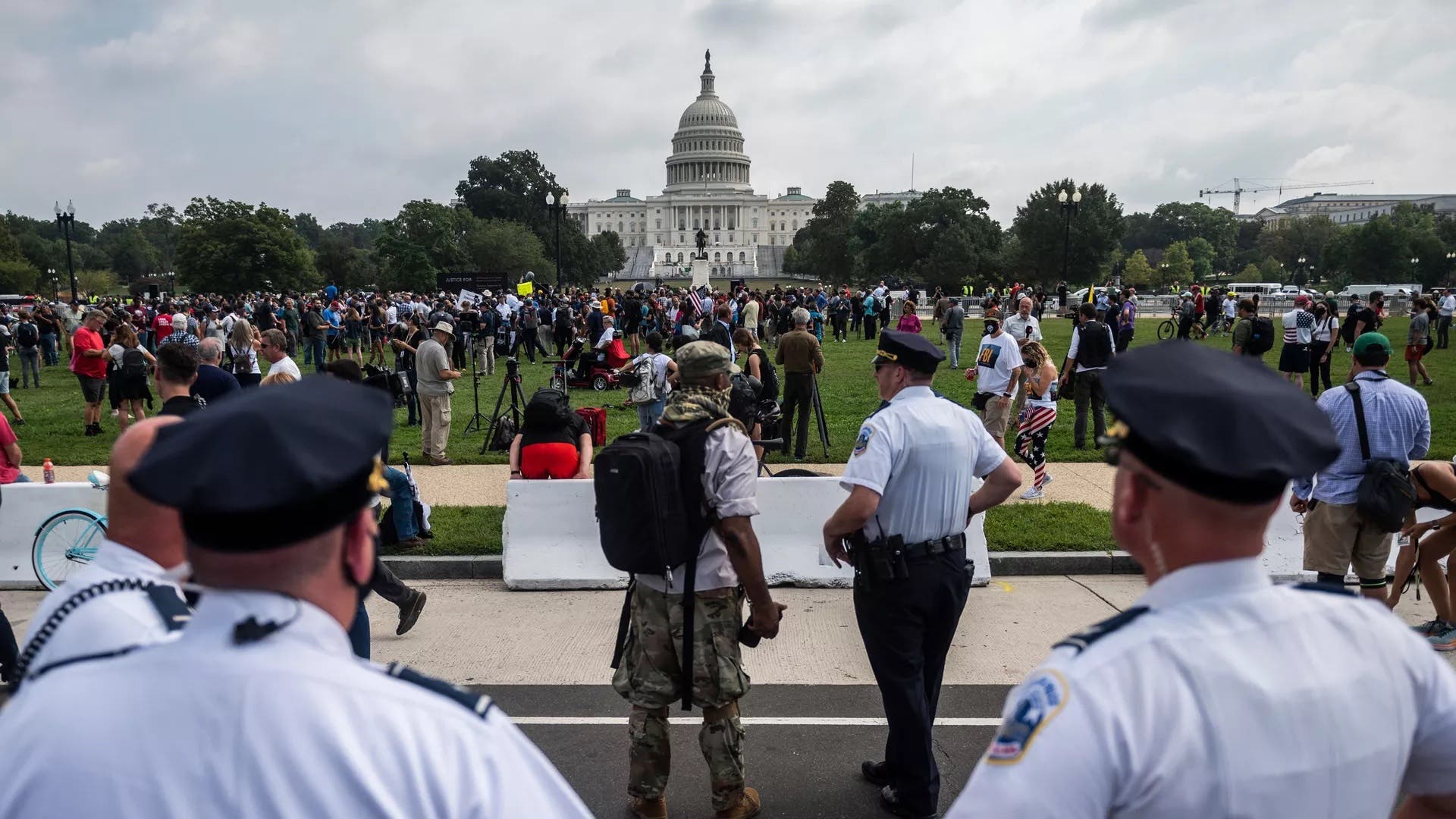 Here is a shot of the stage for the huge MAGA rally in DC today. pic.twitter.com/c4cEXpCN3m

Journalists desperate for a story to cover crowded any outnumbered protestor willing to speak with them.

The theatre of the absurd as already begun in DC. A protester finally showed up, and is surrounded by media looking for something to cover. She is complaining that the govt wants to take her house and give everything to illegal immigrants. From @FordFischer pic.twitter.com/xCnKiSPMCz

Give me a damn break. Two people arguing at the DC protest surrounded by dozens of media. I don’t think this is going to be a proud day for journalism in America. From @_RichardHall pic.twitter.com/7RkNKuNLX7

Despite the dismal turnout for the protest, four people still managed to get arrested during the events surrounding today’s rally.

Washington DC’s Fox5 News reported that “one person was arrested on a weapons charge when Capitol police discovered he was carrying a knife. A second person was taken into custody after a bystander alerted them to a gun he was carrying.”

“Capitol police also arrested two people on warrants out of Texas Saturday morning after a traffic stop.  One of the people in the car had a firearm, the other was arrested for a probation violation,” the local Fox affiliate stated. 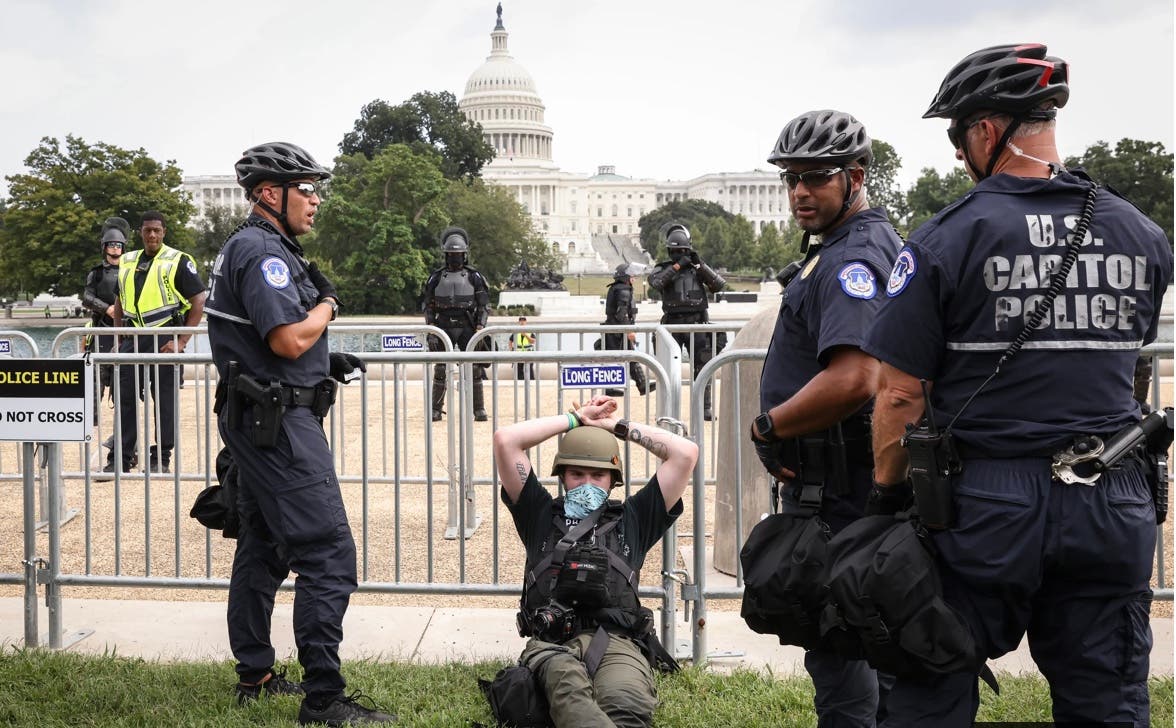 By mid-afternoon, Capitol police estimated that there were “400 to 450 people inside what they described as ‘the protest area’ – a number that fell far short of the 700 organizers expected to participate in the rally,” Fox5 related.

As the failed rally dispersed, many participants seemed to blame the failure on one of it’s primary beneficiaries, Donald Trump himself, who reportedly, and not unexpectedly, spent the day at his New Jersey golf course.

Crowd dispersing from Union Square after the conclusion of today’s ‘Justice for J6’ rally near the Capitol Building here in DC pic.twitter.com/3n1jzQJiLI

Unfortunately , the inability of the “Justice for J6” rally organizers to attract a substantial crowd today does not mean that there is a dwindling number of misinformed right-wing fanatics who still refuse to believe their eyes — even after being shown videos of the violent clashes — that the January 6th insurrectionists were anything more than peaceful tourists.

With Fox News and other right-wing media continuing to push the big lie of a stolen election it’s unlikely that their enraptured viewers will have access to the truth anytime soon.

We’ll leave you with CNN’s wrap up of the poorly-attended “J4J6” rally for the mainstream media perspective on the event.