Late in the Trump administration, after his disastrous, landslide loss to Joe Biden, there was much speculation that Donald Trump might attempt to use the military to retain power.

As commander in chief of the armed forces — and having taken last minutes steps to install key allies in the Defense Department — Trump was in a position to declare a state of emergency that would allow U.S. troops to operate domestically and quash any opposition to his coup attempt, the fantasies of the deservedly paranoid postulated.

While details of Trump’s scheming to remain in office are still being uncovered by the House Select Committee investigating the January 6th insurrection, the military largely stayed out of the action on that fateful day, perhaps purposefully to allow the violent rioters to trash the Capitol and come within inches of preventing the certification of Joe Biden’s election.

That the U.S. military did not intervene at that time is largely due to the fact that its leaders have maintained their commitment to civilian control of the armed forces, without which the chances of a military takeover of the government could have long ago resulted in the end of the American democratic experiment.

Today, during a much-scrutinized Senate hearing, General Mark Milley, chairman of the Joint Chiefs of Staff, reiterated his commitment to civilian control of the military while walking a tightrope over questions about why he took actions that could be seen as defying the President when Trump was in office and then allowed the top military brass’s recommendations regarding the withdrawal from Afghanistan to be overruled by President Biden.

As Senators of both parties questioned the Joint Chiefs of Staff chairman, it soon became clear that senior military had serious issues with both presidents when it came to the U.S. presence in Afghanistan and the best way to end it.

Among the revelations that emerged from today’s hearings was the fact that, just eight days after he lost the presidential election, Trump had issued an order for all troops to be withdrawn from Afghanistan before he left office.

General Mark Milley testifies that the Trump administration issued him an order on November 11, 2020, eight days after Trump lost the election, to withdraw all forces from Afghanistan before Trump leaves office. pic.twitter.com/IZRt28BZiS

The fact that this never happened demonstrates how General Milley and his cohorts were able to forestall a direct order until they were able to convince the White House to rescind the order, postponing the final exit until Biden took over the presidency.

Of course, the main focus of the hearing was the chaotic handling of that final exit, and General Milley was peppered with questions about the details of the decision-making process that went into the departure strategy.

Perhaps the most revealing exchange came when Senator Tom Cotton (R-AR) questioned Milley about President Biden’s rejection of the military’s recommendation to remain in Afghanistan longer rather than pull out according to the White House’s mandates.

Senator Cotton questioned why General Milley didn’t resign when his recommendation wasn’t accepted, and the Joint Chiefs chairman responded with a vociferous defense of civilian control of the nation’s military might. 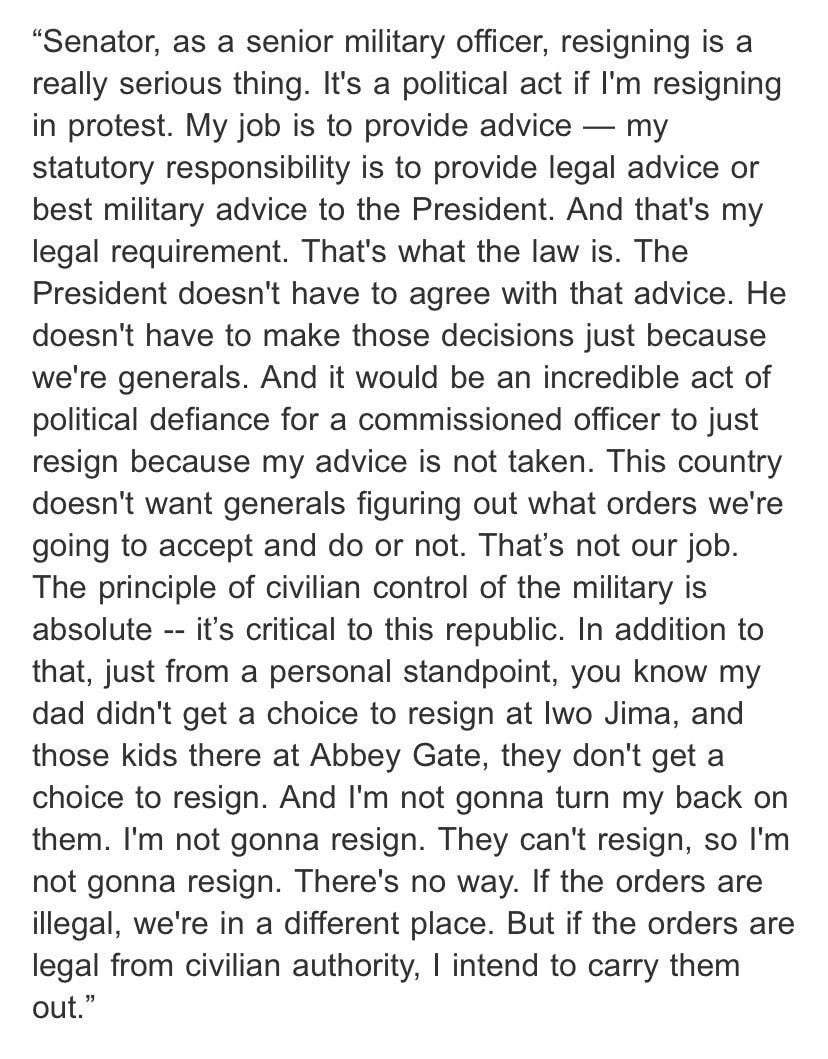 Milley’s defense of the time-honored principle of an apolitical military in this country may be seen as reassuring when we don’t have a lunatic in the White House, but the horrifying prospect of another Trump presidency makes one wish for a stronger assurance that that commitment to following the orders of the commander in chief doesn’t apply to illegal or corrupt orders that could plunge us into a nuclear winter and global devastation.

You can watch the exchange between Senator Cotton and General Milley in the video clip below.

Wow. Exchange between Gen. Milley & Sen Cotton on why he hasn’t resigned re #Afghanistan

“President doesn't have to agree w advice just because we're Generals..This country doesn't want Generals to figure out which orders we're going to follow or not..”
pic.twitter.com/cb3do7pmGh