It’s fairly obvious that the wanna-be emperor has had no clothes for quite some time.

It’s also obvious that more than being metaphorically naked, Donald Trump is even more upset about being without social media network access for his every turgid utterance since he was banned from Twitter, Facebook, YouTube, and most other major platforms after the January 6th insurrection attempt.

Staying true to his litigious nature, Trump had his latest batch of attorneys file a motion in U.S. District Court in Miami seeking a preliminary injunction against Twitter and its CEO, Jack Dorsey, arguing that Twitter is censoring Trump in violation of his First Amendment rights.

This is exactly the type of frivolous lawsuit that is guaranteed to generate headlines while wasting copious contributions from Trump’s MAGA followers on a motion that is sure to fail.

Not only does the suit demonstrate a complete lack of understanding of exactly to whom the protections of the First Amendment apply — hint: it’s the government, not private companies — but given that Twitter’s terms of service specify that any suits against it must be filed in its home state of California, it also demonstrates a complete lack of understanding of proper judicial procedure.

Response from those Twitter users still allowed on the platform was justifiably harsh.

Congressman Ted Lieu (D-CA), a frequent Trump critic, weighed in with his own quixotic lawsuit idea inspired by the disgraced former president’s antics.

I’m preparing a lawsuit to force Fox News to give me my own show on weeknights. https://t.co/z9wEHHwffI

Harvard University Professor Emeritus Laurence Tribe described the ex-president’s lawsuit in the most negative terms possible, reiterating his opinion in as many ways possible to get his point across.

Trump’s lawsuit to force Twitter to let him back on its platform is garbage. Pure BS. A pile of crap. Frivolous. An abuse of the judicial system. Zero merit. Got it?

It would be so incredibly dangerous

The same thing is happening with the housing crisis. Nobody went to jail last time and they are back for more blood money.

@twitter is a private forum like a physical place (eg. house). One can hold a debate forum and undoubtedly will have rules. And when you violate any of its rules you will be asked to leave the premises.

As for free speech, you can hold your own forum at your own damn house.

In other words, the lawsuit is the same as the guy who filed it. 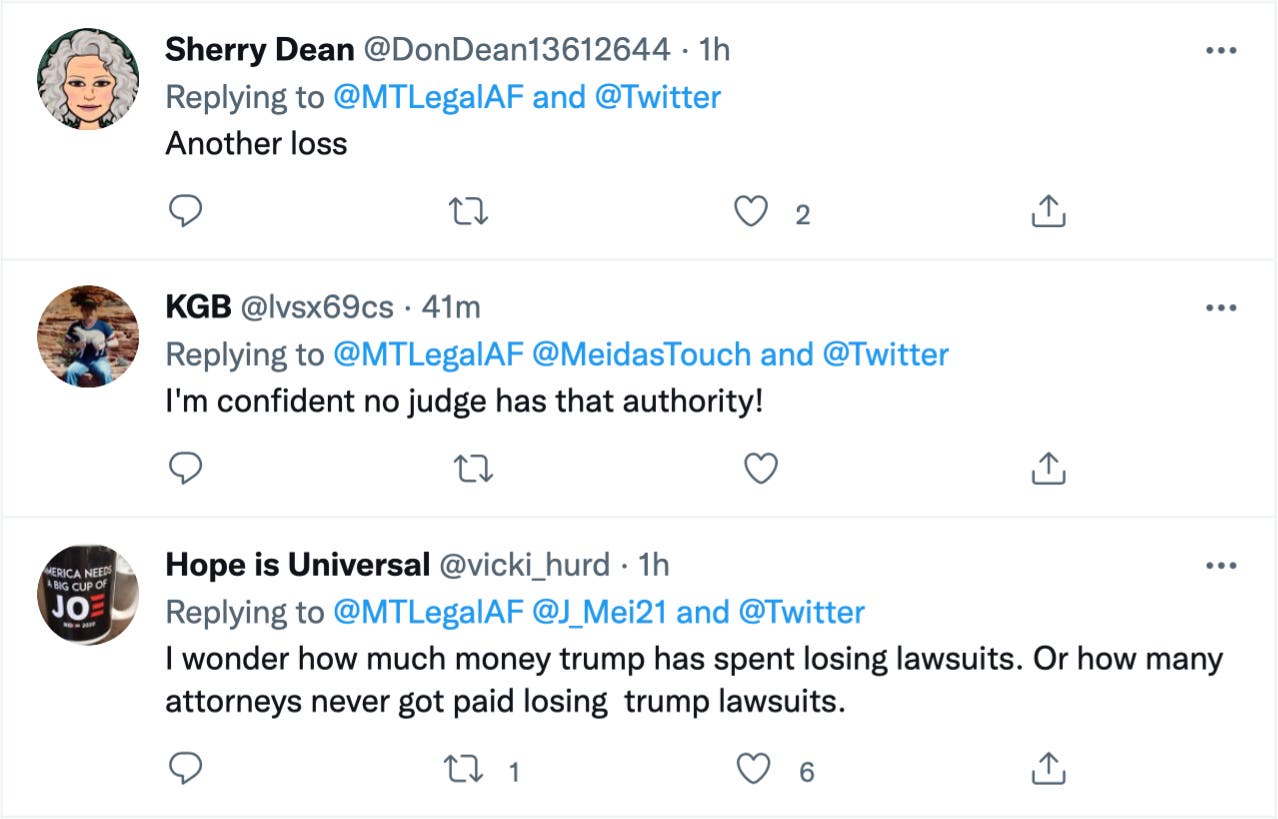 I saw the headline, and my immediate thought is, "now thats pure comedic gold right there."

If Trump were smart — yes, we’re talking extreme fantasy here — he would be saving his money for his defense on the multiple cases that he’s likely to be caught up in surrounding his illicit actions as president rather than wasting it on these sorts of frivolous lawsuits that he has no hope of actually winning.

Let’s hope that the courts do heavily sanction Trump and his lawyers for wasting their time with such obviously doomed litigation.

Original reporting by The Associated Press at POLITICO.