Marco Rubio has been pretty much politically irrelevant since his failed run for the 2016 Republican presidential nomination.

Sure, he hypocritically tweets out his Bible verses each day in a show of conservative piety and continues to book appearances on all the right-wing media outlets, but with his presidential aspirations diminished as other, even more Trump-like GOP potential contenders like Florida Governor Ron DeSantis and South Dakota Governor Kristi Noem take over the limelight, Senator Rubio’s chances of achieving his ambitions seem less likely than ever.

Still, Rubio plugs away with posting what amounts to right-wing extremist virtue signaling (at least if you count lack of empathy for other human beings as a virtue) on Twitter in the hopes of keeping his name alive for the next Republican presidential primary season, knowing that his social media activities will at least help with his re-election campaign for his senatorial seat in his home state next year.

Rubio may have made a strategic mistake with one of his recent posts, however.

In a tweet attacking his Democratic rival for that Senate seat, Congresswoman Val Demmings (D-FL), Rubio set his targets on her support for President Biden’s Build Back Better legislative package which includes a host of progressive priorities that are anathema to the reactionary MAGA hordes, including an anti-poverty provision that would provide $300 per month to each child in a family.

And the radical left is just one Senate comrade away from making it the lawpic.twitter.com/URuxWK3juo

Rubio’s characterization of the proposed child anti-poverty measure as socialism and his not very subtle reference to a Soviet-style “comrade” may come naturally to a politician who relies on the support of a sizeable population of anti-communist Cuban exiles (don’t call them immigrants, though — that would rile up the nativists in the GOP).

Unfortunately, Rubio’s rote post left him open to a critique that was as simple as shooting marlin in a barrel, and it’s not just the odd implication that the Florida senator might want to repeal the child labor laws and put the toddlers on the assembly lines.

If anyone knows about getting paid not to work, it's Marco Rubio pic.twitter.com/zX24ZFbhPV 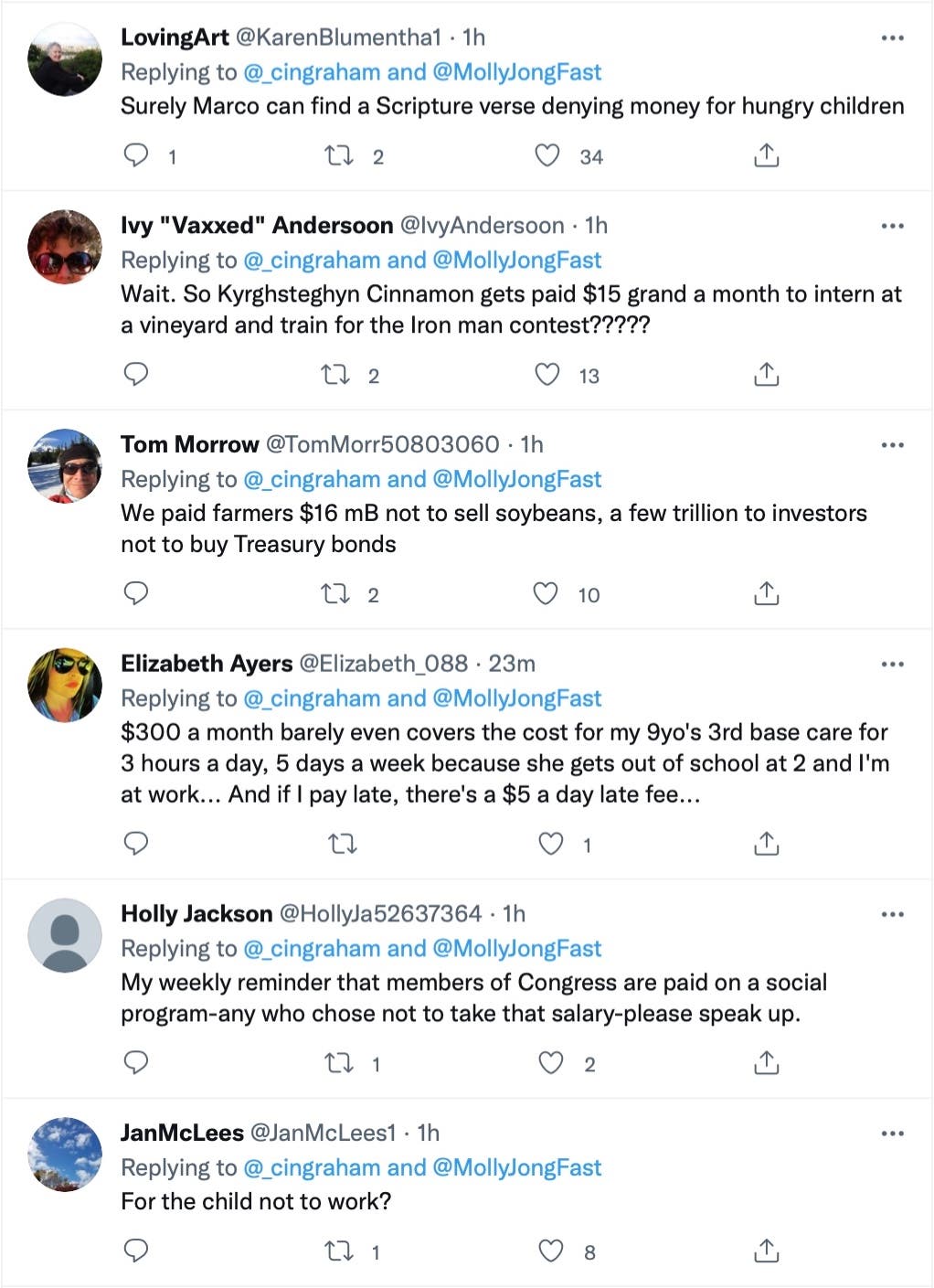 Yes, it appears that for all his sanctimonious tweeting, Rubio hasn’t been as attentive to performing the basic functions of his own job during his time in office.

Perhaps Senator Rubio should take some time to think through the implications his social media posts have on his own record as a lawmaker before hitting the tweet button.