After the former president managed to parley such claims into a violent show of force from his supporters during the January 6th insurrection, he lost his primary social media platforms for issuing his rabble-rousing proclamations after being suspended or permanently banned from Twitter, Facebook, Instagram, and YouTube.

Despite the loss of his main communication tools to reach his rabid base, Trump and his surrogates — including people like his former national security advisor General Michael Flynn and My Pillow CEO Mike Lindell — managed to continue to hold well-attended rallies far beyond the end of the presidential race to push his claims of election fraud that were rejected time and again for lack of evidence by any court to which they were sloppily presented.

Now, it seems as if these sorts of grand events designed to express outrage over literally trumped-up accusations of election fraud seem to be losing their appeal to even the most loyal MAGA-followers.

According to a report in The Salt Lake Tribune, the organizers of the event — which featured a headlining address by General Flynn — expected about 10 thousand people to turn out for the rally.

Instead only about a tenth of that number — around a thousand people — showed up on the initial day of WeCANact, leaving a sea of empty seats on the convention center’s floor. 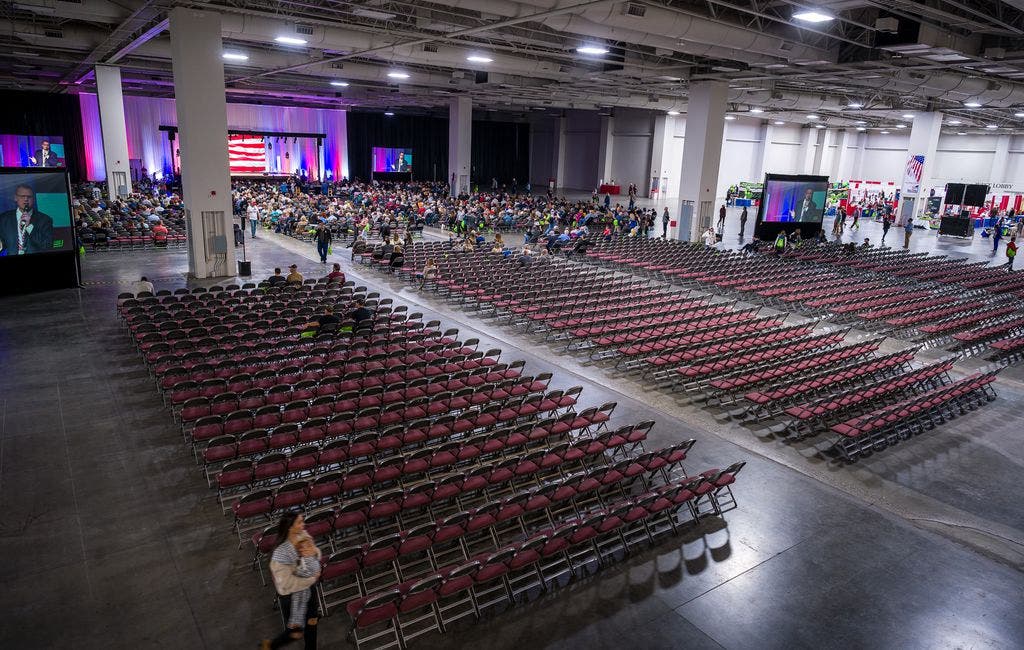 The newspaper’s account of the WeCANact rally shows that the fear-mongering over Marxist ideologies wasn’t the only tin-foil hat conspiracy claim being promulgated at the event.

“The event did focus on that promise, but also offered up a large helping of misinformation about COVID-19, vaccines and the 2020 election. And, to top off the fringe political buffet, there were lots of references to the QAnon conspiracy theory,” The Salt Lake Tribune wrote.

“The falsehoods and half-truths flew fast and furious Friday. A favorite target for speakers was the COVID-19 pandemic and any protective measures taken to stop the spread of the virus that has killed more than 720,000 Americans,” the Tribune’s Bryann Schott wrote before adding, “Other speakers spent time promoting unproven alternative cures for the virus.”

“More than a few speakers referred to anything they viewed as the enemy as communist or Marxist. Leigh Dundas, who cheered on the crowd who attacked Congress during the Jan. 6 insurrection at the U.S. Capitol, warned the crowd that a plot launched by former Soviet Premier Nikita Kruschev to replace the U.S. government with a communist dictatorship was coming to fruition.”

That a diminishing number of Utah residents want to hear this balderdash is an encouraging sign for the future of our democracy.

Now if only we can convince the remaining Trump zealots who still believe in his lies and turn up for his deplorable rallies of misinformation and malicious propaganda to crawl back in their caves and allow the sane and well-informed majority of citizens to control the levers of power, this nation may still survive in some semblance of a recognizable form.

Original reporting by Bryan Schott at The Salt Lake Tribune.