For many people, Sunday morning is a time for higher spiritual reflection, prayer, and words of inspiration.

For Donald Trump, it’s a time for an unholy sabbath of hate, bigotry, insults, and a brand of false patriotism that goes against the values of tolerance and decency that once made this a great nation.

Trump fulfilled his Sunday morning self-obligations to infect the world with his rhetoric of prejudice and exclusion with his latest press release, one of those missives that he’s used to substitute for his now-banned Twitter feed since he was forced off of most social media in the wake of the January 6th insurrection.

In a long harangue designed to resurrect fears about unchecked immigration among his white nationalist and nativist followers, Trump immediately paints a picture of a dystopian invasion of the United States by criminal immigrants, a central tactic in his cynical political playbook ever since he rode down the Trump Tower escalator to launch his 2016 presidential campaign.

“Our Country is being poisoned with the millions of people that are illegally flowing through our Borders, in most cases not even questioned or stopped,” Trump begins his latest rant.

Even if one ignores the massive exaggeration of the number of refugees at the border and Trump’s errant capitalization, the characterization of any immigrant surge as a “poisoning” of our nation betrays the twice-impeached ex-president’s overt bigotry.

It’s significant that Trump could never recognize the reality of the actual poisoning of our nation’s environment through his continued refusal to embrace renewable sources of energy over fossil fuels during his administration.

Repeating old tropes, about the necessity of a border wall — the useless folly he diverted funds from the military to finance and could barely manage to construct a few miles of easily scaled fencing during his entire four years in office — Trump has updated his fear-mongering to include not just Mexican and Central American refugees, but to encompass no phony threats from the Afghan refugees who were forced out of their home country by the threat of retaliation by the Taliban after Trump undermined the previous Afghan government with his unilateral negotiations with the Islamic terrorist group.

Not content with demonizing refugees, no matter their country of origin, Trump also insults the entire American nation saying “How stupid our Country has become.”

While one could argue that his assessment of the national IQ is one of the few true things that the disgraced ex-president has ever uttered — using his own election and successful conning of a significant percentage of the U.S. populace as proof — his claims that, when he was still president 10 months ago, none of the problems that he enumerates existed, demonstrates exactly how stupid he believes his followers to be to swallow that load of horseshit so easily.

It simply goes to prove the truth of the revealing statement that Trump made early in his political career: “I love the poorly educated!”

They are the only ones foolish enough to accept Trump’s claptrap as gospel truth.

You can read the entirety of Trump’s sermon of evil below. 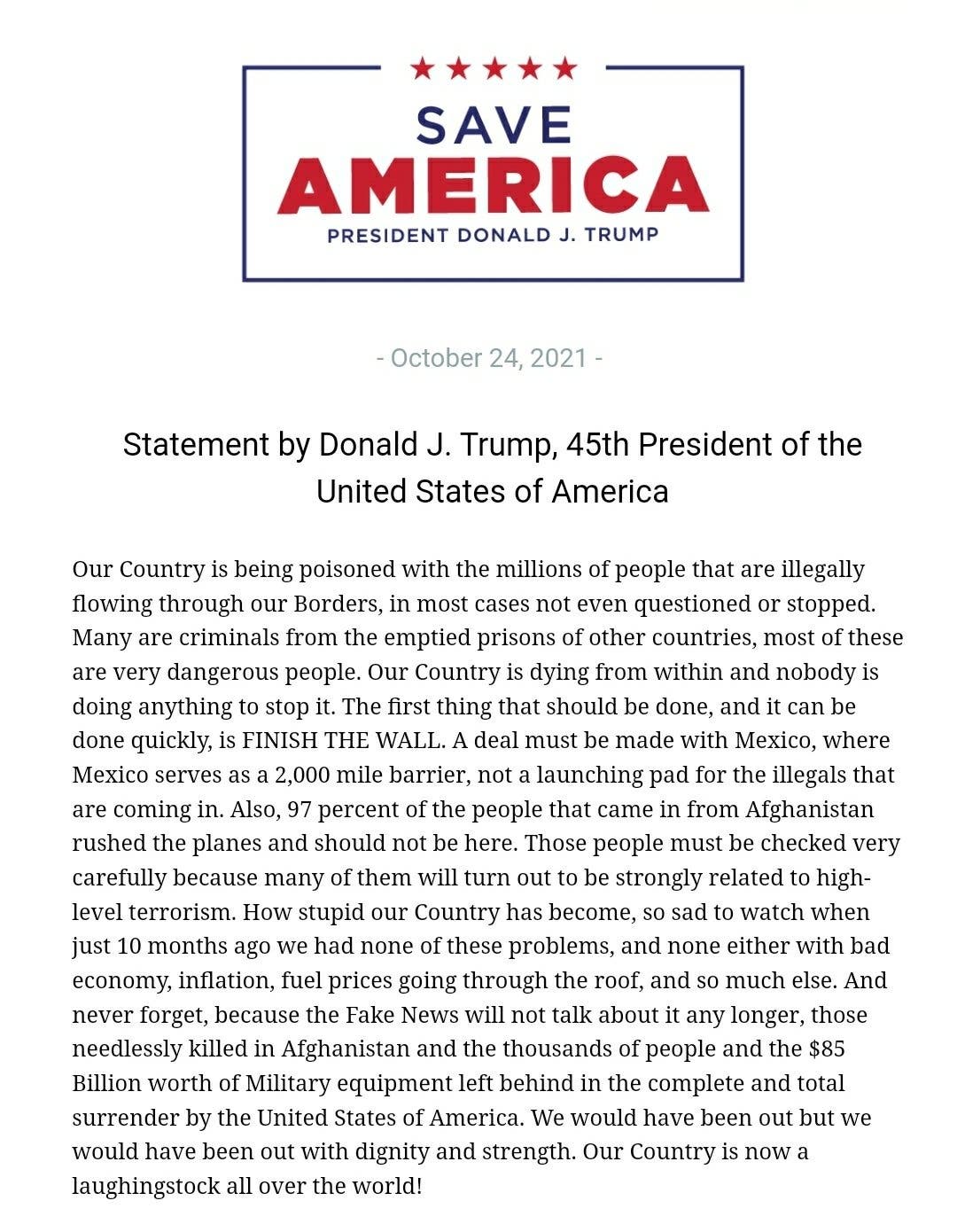