The nation is closely watching tomorrow’s election for the governor of Virginia, expecting it to be a bellwether of future public political sentiment.

As the first major contest since the January 6th insurrection in nearby Washington DC  — and potentially providing the first evidence of the possible effects of Donald Trump’s long campaign to sow distrust of the integrity of the American electoral system — the race tomorrow between Democratic candidate former Virginia governor Terry McAuliffe and Republican Glenn Youngkin has been described as a tight race marked by turmoil over vaccine mandates and right-wing protests over a phony controversy about the teaching of critical race theory in the state’s schools, a completely non-existent factor in the state’s K-12 curriculum.

Since the current Democratic governor of the state, Ralph Northrup, is prevented from running again due to term limits, his party brought back McCauliffe, the former governor with close ties to Clintons who was chairman of both Bill and Hillary’s campaigns and of the Democratic National Committee.

In the post-Trump era, however, McCauliffe’s experience in traditional politics may be as much of a liability as an asset, and Republicans are counting on a base of voters still stinging from the party’s loss of power in both the executive and legislative branches of the federal government to show up to vote despite the barrage of right-wing media messages encouraging them to believe that the entire electoral system is “rigged.”

With McCauliffe not exactly inspiring persistent fervor among Democratic voters, the election may in the end depend on who can turn out their base better.

In this environment, the GOP candidate Youngkin is walking a fine line attempting to balance a desire to see as many conservative voters cast their ballot on his behalf — a result that his endorsement by Donald Trump was meant to elicit — with the possibility that too much attention from the disgraced former president could motivate the turnout among progressive voters in the state and lead to a defeat.

It’s telling that Youngkin has never invited Trump to hold a rally in Virginia to excite the MAGA hordes about his candidacy, perhaps fearing that any controversy that such an event would create would be more counterproductive than helpful.

This morning, on the eve of the election, Trump just may have tipped the wire that Youngkin was so carefully balancing upon.

Responding to news reports that Youngkin has been purposefully keeping Trump at arm’s length during the campaign — and a Lincoln Project ad that taunted him about it — the former president issued a statement attacking “the perverts” behind those political ads and closely aligning the Virginia GOP candidate with his own deplorable policies. 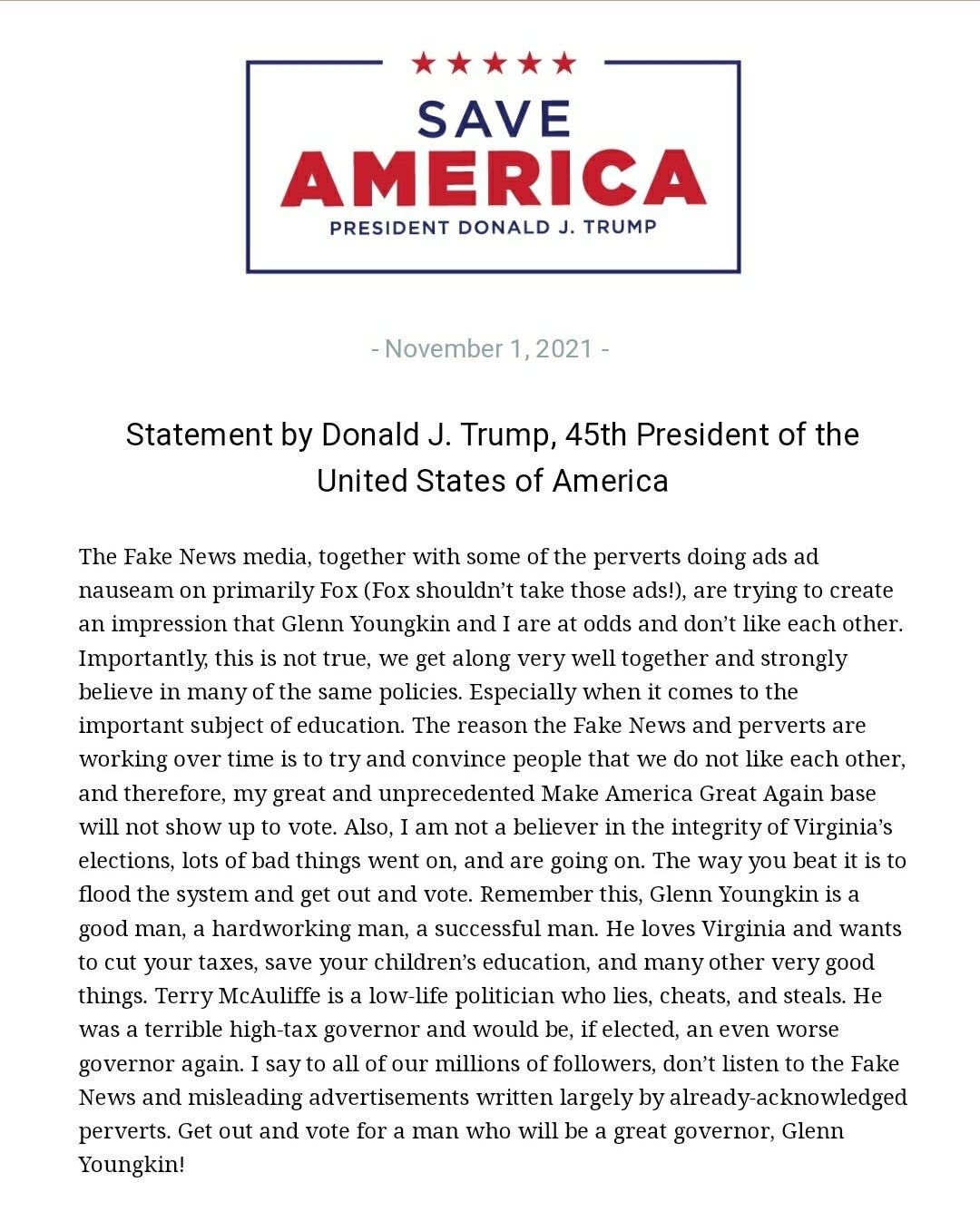 With this statement, it is Trump himself who is now trying to walk that fine line, denouncing the integrity of Virginia’s elections, while trying to convince his followers that it’s still worth going to the polls.

It’s an appeal that is unlikely to be swallowed whole by anyone who isn’t already part of the former president’s cult but could make the difference in the likelihood as to whether some Virginia Republicans will participate in the election.

This makes it all the more crucial that Democrats can excite their own base to vote for McCauliffe tomorrow and send a message to the nation that Trumpism has been definitively defeated.

The future of Virginia, and of our nation, depends on it.