You want to look away and ignore the demented rantings that the disgraced former evil occupant of the White House dispenses on a daily basis, despite his increasing irrelevancy in anything besides as a defendant in his hopefully eventual criminal trials.

Donald Trump’s latest missive of alternative facts, however, is so chock full of egregious and self-serving fantasies about his performance while in office that it demands to be publicly derided and mocked for its transparent attempts to rewrite the history that each of us witnessed with our own senses, allowing us to smell the awful stench of the bovine manure that he is peddling as truth to his gullible followers.

Any statement that begins by labeling Democrats as “Communist,” accuses them of “engaging in another Witch Hunt,” and describes the Trump administration’s response to the COVID pandemic as “unprecedented and incredible” indicates that Trump is incorrigible in the fashioning of his propaganda messages out of his cynical distortions of reality. 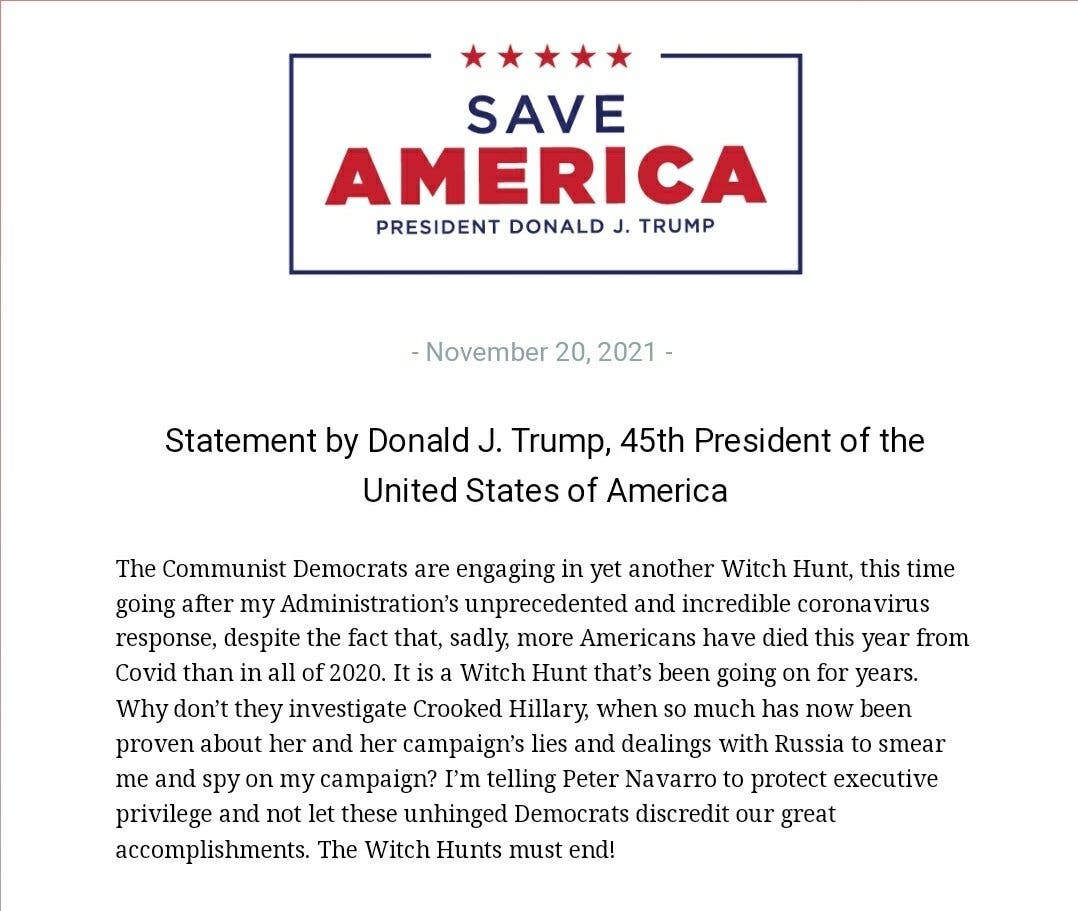 That Trump fails to mention that the pandemic death toll has only risen this year compared to last because of the large number of his MAGA base who have refused to get vaccinated, a trend exacerbated by the refusals of Republican politicians to issue and enforce mandates for facial masks and vaccine shots is obviously intentional as he seeks to shift the focus from his own documented failures to tell the truth about the virus outbreak and effective measures to prevent it to the American people.

Trump’s harking back to his 2016 presidential opponent Hillary Clinton demonstrates how sad and tired his tactics continue to be as he falls back on tried and certainly un-true falsehoods to move the attention away from his own misdeeds.

Trump can tell Peter Navarro anything he wants about executive privilege, but it won’t change the fact that, since Trump is no longer the president, Navarro cannot avail himself of that dodge to avoid submitting evidence to the House Select Committee investigating the planning of the January 6th insurrection and is likely to face the same fate as Steve Bannon — an indictment for contempt of Congress — if he fails to comply with the committee’s document request.

As the House committee subpoenas more and more of Trump’s White House staff and advisors to present evidence and testimony in their investigation, Trump’s fear and anger grow exponentially as the inquiry creeps ever closer to his door.

Yes, one can choose to ignore the desperate press releases that the panicking ex-president issues as his rage-releasing therapy.

But if you do, you’ll miss the exquisite pleasure of watching the worst president in American history squirm as his inevitable reckoning with justice inches closer each succeeding day.