Congresswoman Marjorie Taylor Greene (R-GA) must be tired of playing at being a legislator — a role that she has been unable to fulfill competently since being stripped of her committee assignments in the brief period following the January 6th insurrection when Republican leadership was stilled ashamed enough to defy the MAGA-hatted followers of Donald Trump.

What else could explain the pivot to playing a medical expert as she attempted to do in a bizarre and destructive series of tweets chock full of COVID misinformation that she posted to Twitter this morning?

On a day after stock markets dropped precipitously due to fears of a new wave of a resurging pandemic after the discovery of a new variant of the COVID virus by South African scientists — dubbed the Omicron variant — Rep. Greene was spreading medical misinformation and conspiracy theories to her followers in a lengthy thread that continued her clownish crusade against face masks and vaccines as important tools to combat the pandemic.

Greene began her ignorant rant by pointing to the seeming contradiction between Africa’s low vaccination rate and its relatively low fatality rate from the disease.

While Congresswoman Greene’s grasp of logic — and syntax — may be abysmal, it seems like genius-level mastery compared to her claims that the use of the livestock dewormer Ivermectin is at least partially responsible for Africa’s low pandemic fatality rate.

While Greene attaches a cherry-picked medical study to bolster her claims, she neglects to reference an even more convincing consumer update from the US Food & Drug Administration entitled Why You Should Not Use Ivermectin to Treat or Prevent COVID-19, which outlines the dangers of utilizing the animal treatment in humans and points out its unproven safety and efficacy against the coronavirus.

Calling Ivermectin a “Wonder drug,” Greene defies the judgment of the FDA and essentially accuses any doctor who follows the agency’s recommendations and refuses to utilize the horse dewormer in their treatment of COVID patients of murder.

The Georgia congresswoman politicizes her medical misinformation to call for an end to effective public health measures, leading one to wonder if she’s getting substantial donations from the coffin makers industry association.

Perhaps she’ll get some campaign contributions from the medical malpractice attorneys’ lobbying group after the suggestion in her next tweet, so far removed from the usual GOP Chamber of Commerce-friendly anti-tort stance.

The true lunacy of Representative Greene’s conspiracy-minded thinking becomes clear in her final tweet of the thread.

Trying to tie the announcement of the discovery of the Omicron variant to unnamed “Tyrants” with an ironic invocation of these shadowy figures’ attempt to control the populace with “irrational fear,” Greene displays her real paranoia and proves exactly how dangerous her rants truly are.

The response on Twitter to MTG’s posts was swift and brutal. 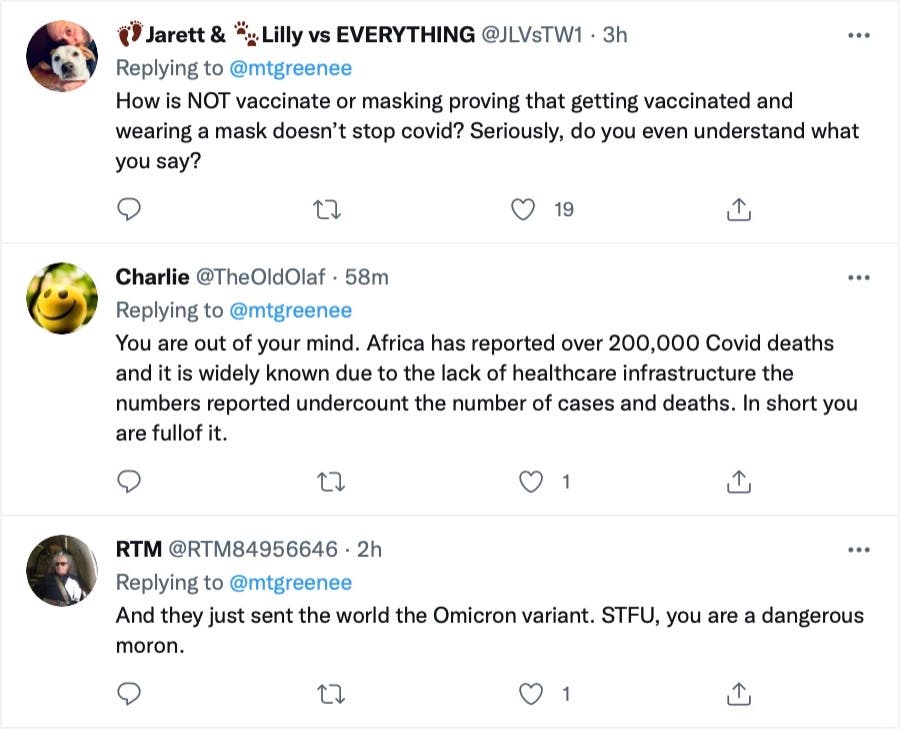 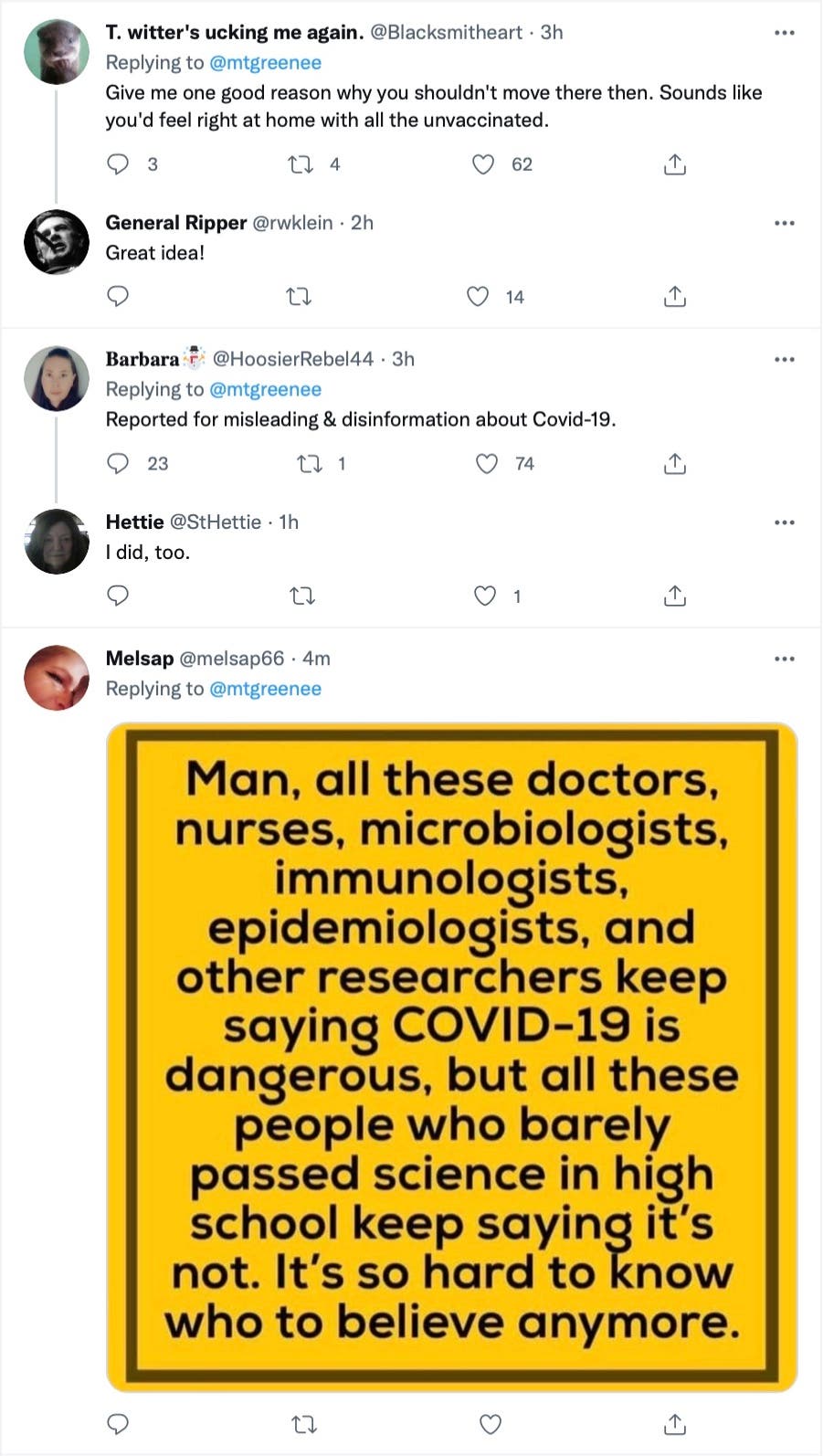 Marjorie Taylor Greene’s latest stunt of medical misinformation just adds urgency to the need for her expulsion from Congress and her banishment from the nation’s political stage.

At the very least, she should be permanently banned from Twitter for her COVID disinformation recidivism.

Let her become a bizarre footnote of a tumultuous time in American politics when a modern-day “Know-Nothing” movement briefly resurfaced in this nation only to implode when the dangers of their rhetoric became self-evident.