What can you do about a physician who violates their Hippocratic Oath to do no harm when they are disseminating misinformation about the COVID pandemic and are also a sitting member of Congress?

It’s an important question given the recent actions of Congressman Ronnie Jackson (R-TX).

Rep. Jackson is a retired United States Navy rear admiral whom you probably remember from his role as the chief White House Physician to the President during the Obama and Trump administrations, a position in which he attempted to gaslight America by praising the corpulently un-athletic Donald Trump’s “incredibly good genes” while giving misleading accounts of the fast-food-loving president’s vital health statistics.

Jackson was rewarded by Trump for his prevarications with a nomination to become a member of his cabinet as the Secretary of Veterans Affairs, a post for which he was forced to withdraw from consideration after tales of his heavy drinking on the job, the hostile work environment he presided over, and his penchant for handing out pills “like they were candy” to White House Staffers began to circulate among the Senators who would be voting on his confirmation.

None of the serious concerns that prevented Jackson from joining the Trump cabinet seemed to matter to voters in Texas’s 13th congressional district when they elected him as their Congressman last year.

His parroting of the Trump political playbook seemed to overcome any questions about his integrity and competency.

Now, Congressman Jackson is dutifully preaching from the Gospel of Donald as he spreads misinformation about the COVID pandemic in violation of his professional oath as a doctor while accusing Democrats of somehow colluding with scientists worldwide to invent new COVID variants to advance their own political aims.

Here comes the MEV – the Midterm Election Variant! They NEED a reason to push unsolicited nationwide mail-in ballots. Democrats will do anything to CHEAT during an election – but we're not going to let them!

While the unlikely accusation seems cribbed from the plot of a bad dystopian sci-fi movie, Jackson is counting on his false allegations to resonate with his own MAGA base and to keep himself in good standing with the Trump mob.

The response from both traditional and social media to Jackson’s bad-faith political paranoia was less than stellar for the rogue physician.

CNN anchor Jim Acosta called Rep. Jackson “the doctor of disinformation for the far-right” while discussing the Texas lawmaker’s tweet with CNN Medical Correspondent Dr. Jonathan Reiner, who pointedly blamed the vaccine hesitancy now being displayed by 50 million Americans on Jackson and other anti-vaccine zealots while suggesting that his past actions tell you everything that you need to know about his character.

“Ronny Jackson called President Obama a deep state traitor. President Obama was his commander-in-chief, was his patient, and was also the man who promoted Mr. Jackson to flag rank… That tells me all I need to know about Mr. Jackson” pic.twitter.com/iva6VdNcXE

How does anyone believe him after said Trump was 6’3” and weighed 239 lbs. wide receiver D.K. Metcalf is 6’3” 239 lbs. How does Ronny Jackson still have a medical license!? pic.twitter.com/5HzcajnDhq

Hey Ronny, in addition to be a liar, you're also a hypocrite since you yourself voted by mail when you worked at the White House. https://t.co/h0zg6Z9U1c

while on a presidential trip and took prescription-strength sleeping medication that prompted concerns from his colleagues about his ability to provide proper care. After interviewing 78 witnesses and reviewing a host of White House documents, investigators concluded that Jackson

provide medical care to the President and other top officials, according to the report. How do you still have a legit job, never mind a Twitter account, you tragic troll? @TwitterSafety 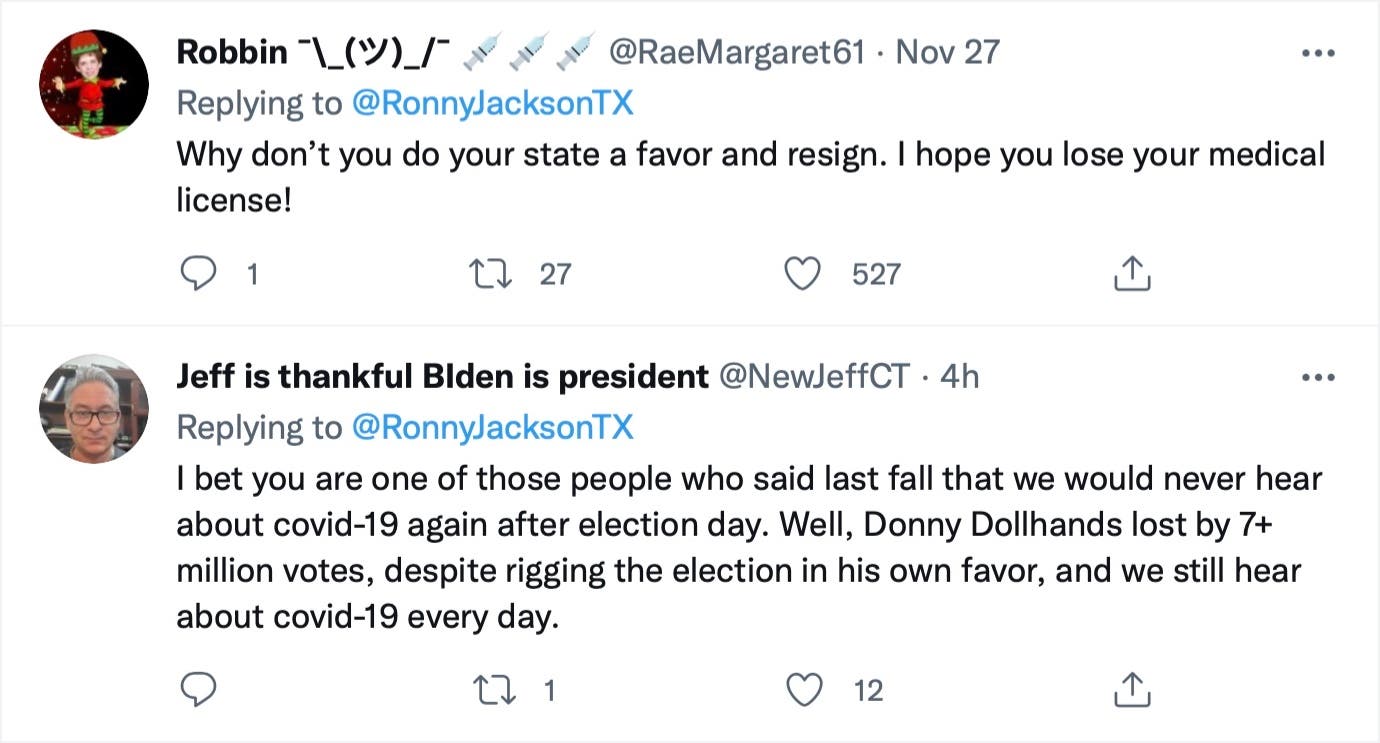 Asleep on the job, then.

Yep. And in violation of his oath: above all do no harm. He's amoral. AMA should be after him by now. 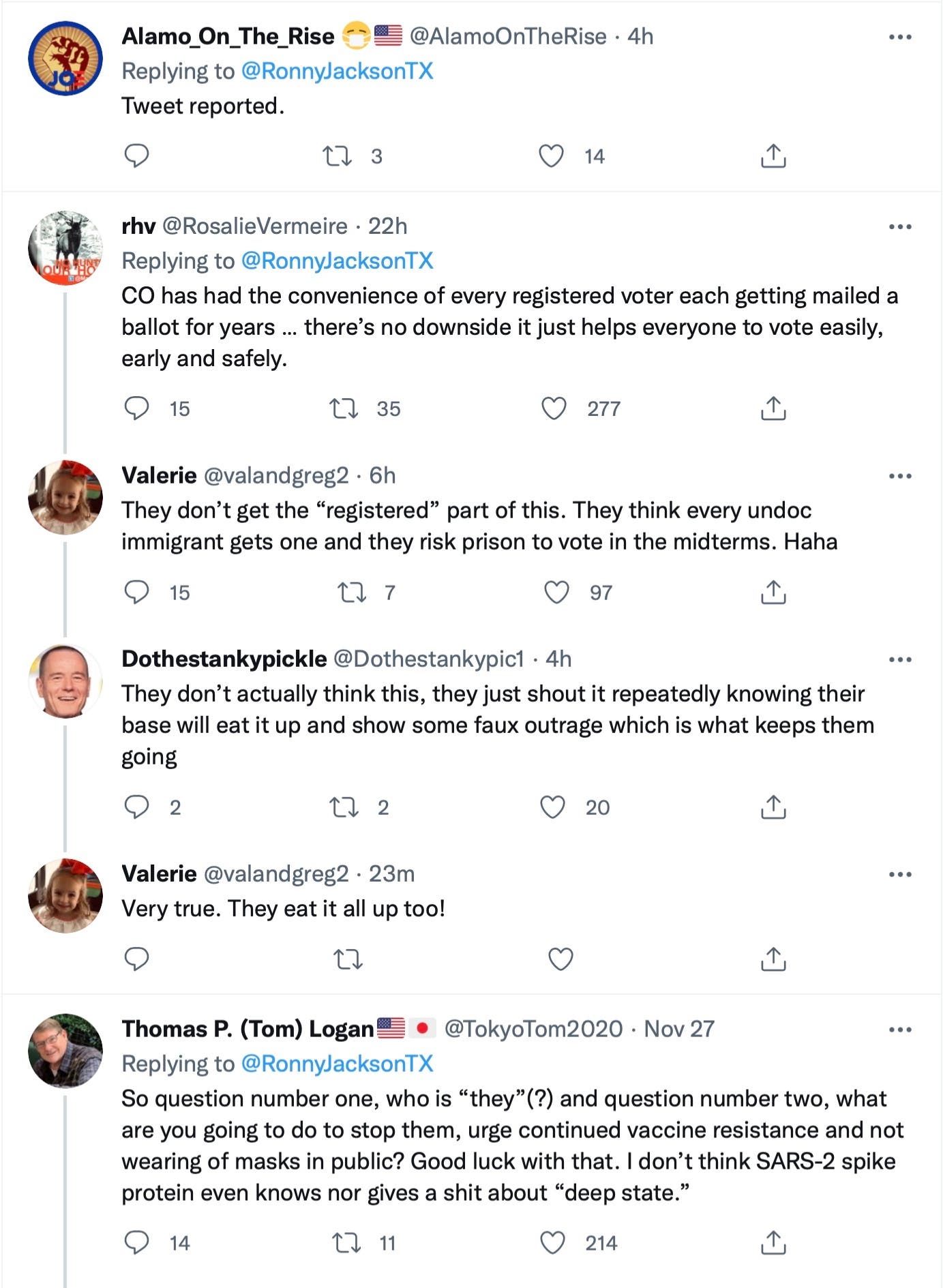 I just reported his misinformation

Translation… Omicron variant will spoil our chances of cheating and stealing the 2022 election https://t.co/WtYJ7q4cKo

The short answer – Yes, he does…or he wants his donors/supporters to believe it.

Either way, not super impressive for a physician or flag officer of our military.

Politics should not come before Country or people

Hopefully, Ronnie Jackson will be among the many sitting Republican legislators who will be voted out of office in the 2022 midterm elections, and he’ll be forced to go back to practicing medicine to make his living.

Please be ready to warn any patient who makes the unwise decision to speak with him in any future medical consultations.