For all of the former guy’s bleating about “fake news,” it is the right-wing news purveyor that helped launch his presidency that has been the most egregious broadcaster of misinformation about everything from COVID vaccines to the legitimacy of the 2020 elections.

Fox News just proved how untrustworthy a source of credible information it truly is after its latest complete distortion of facts was uncovered by Twitter sleuths digging into a claim featured on the network’s Unfiltered with Dan Bongino program.

Bongino, a former New York City police officer and Secret Service agent turned right-wing media personality, displayed a graphic on his program purporting to be a list of the “Top Ten Most Unhealthy U.S. Cities.”

The graphic depicted a map that highlighted, in no particular order, Seattle; Portland, Oregon; Honolulu; San Francisco; San Diego; Denver; Irving, Texas; Austin; Washington D.C.; and Portland, Maine as the urban areas most afflicted by the supposed epidemic of unhealthiness, and of course, blamed Democrats for that shameful status. 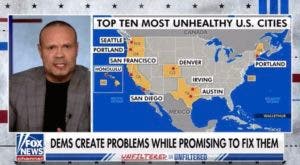 As the graphic displayed on the screen, Bongino ranted about how it was the Democrats’ mismanagement that caused medical care in these cities to suffer.

“And then let’s not forget about the healthcare, either,” Bongino exclaimed. “You soak in some of the health outcomes in some of these inner cities that these Democrats have run monopolistically for decades, and you stand a pretyy darn good chance of dying in one of those inner cities — far more likely than if you lived in areas where they gave a damn about people and their health care outcomes.”

Anyone who hasn’t already been brainwashed by Fox News’ torrent of blatant anti-Democratic propaganda would already be suspicious of Bongino’s claims due to his use of the emotionally-charged racist dog whistle of “inner cities” when referring to urban areas.

Unfortunately for both Fox News and Bongino, the Twitter account belonging to Acyn — a progressive activist and self-described “Internet Hooligan” — quickly posted evidence that the list of supposedly “unhealthy” Democrat-controlled cities was actually lifted from a website’s list of the urban centers that were actually the exact opposite of what the right-wing disinformation outlet claimed them to be.

I went to the source cited in this graphic and I’m not sure what happened here pic.twitter.com/3E1S3Dzvhg

Here’s the original list of what the Wallethub.com website considers to be the “Healthiest Places to Live in The U.S.,” practically identical to the ten cities that Fox News cites as being at the bottom of the barrel. 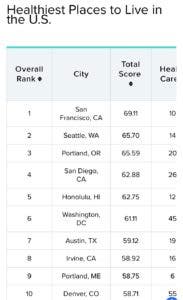 In case you were wondering how Wallethub.com determined their list, here is what they had to say about their methodology:

“In order to identify the overall healthiest cities in the U.S., WalletHub compared 182 cities — including the 150 most populated U.S. cities, plus at least two of the most populated cities in each state — across four key dimensions: 1) Health Care, 2) Food, 3) Fitness and 4) Green Space. Our sample considers only the city proper in each case and excludes cities in the surrounding metro area.”

“We evaluated the four dimensions using 44 relevant metrics, which are listed below with their corresponding weights. Each metric was graded on a 100-point scale, with a score of 100 representing the most favorable conditions for a healthy lifestyle. Data for metrics marked with an asterisk (*) were available at the state level only. For metrics marked with two asterisks (**), we calculated the population size using the square root of the population in order to avoid overcompensating for minor differences across cities.”

“We then determined each city’s weighted average across all metrics to calculate its overall score and used the resulting scores to rank-order our sample,” Wallethub concludes.

Fox News included no apparent attribution for the source of its list or methodology used to compile it, but it is suspiciously similar to the Wallethub publication.

CNN‘s chief fact-checker, Daniel Dale, provided a plausible explanation for the one minor difference between the two lists when he praised Acyn for his web sleuthing.

(Bongino's show additionally appears to have mixed up Irving, Texas with Irvine, California.)

It’s not surprising that Bongino and his Fox News supervisors were apparently as sloppy as they were dishonest in their presentation of their politically-motivated hit job against Democratic-controlled cities.

The saddest part of this example of seemingly deliberate right-wing misinformation is that cable and satellite companies continue to distribute Fox News as a purportedly honest broker of current events when it is, in fact, a dangerous merchant of lies and Trumpian propaganda that has helped polarize the political environment in this nation to make it more divided than at anytime since the Civil War.