It’s usually fairly easy to figure out what it is that Donald Trump is most concerned about.

Simply look at whomever he is attacking and what exactly he is criticizing, and you can reverse-engineer Trump’s fears about something that he himself has likely done and wants to distract you from in a pre-emptive assault on his opponents.

Take, for instance, the latest press release that the former president’s Twitter proxy, Liz Harrington, unleashed on the world late yesterday as Trump is embroiled in controversy over his probable violations of the Presidential Records Act and the clogging of White House toilets with destroyed official documents — a scandal that CNN’s Jim Acosta has dubbed “Water-Closetgate.”

Trump is attempting to try to change the conversation by invoking a hoary accusation of old — that Hillary Clinton and her campaign team acted illegally by “spying” on Trump’s campaign “in an effort to develop a completely fabricated connection to Russia.” 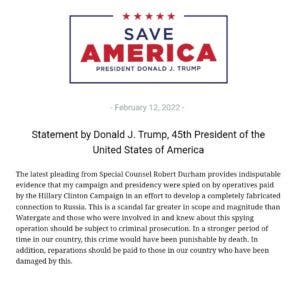 Now anyone who paid even a bit of glancing attention to the Mueller Report knows that no one had to fabricate a shred of evidence of Trump campaign connections to Russia.

There was the Trump Tower meeting with Moscow-based attorney Natalia Veselnitskaya attended by Donald Trump Jr., Trump campaign manager Paul Manafort, and Jared Kushner. The Russian attorney had promised dirt on Hillary Clinton to which Don Jr.’s reaction was “if it’s what you say I love it.”

Manafort himself was forced to plead guilty to felonies including conspiracy to defraud the United States and witness tampering in connection with his work with foreign interests in Ukraine and Russia and would be languishing in prison were it not for Donald Trump’s corrupt pardon grant.

Trump also notoriously seized the notes taken by the interpreter at his 2019 summit meeting with Russian President Vladimir Putin.

Still, despite the smoking guns strewn about in plain sight, Trump continues to insist without a shred of credibility that the connections between his campaign and  Russia are somehow imaginary.

The real clue to the depths of the fear of prosecution that is likely inspiring his latest rant over events that took place six years ago is his invocation of the death penalty as the proper price to be paid for the imaginary charges of treason he is seemingly leveling against the Clinton campaign.

Trump is a master of psychological projection, accusing others of that which he is most guilty in an attempt to cut off any criticism of his own behavior.

Unfortunately for Trump, most people are onto his game at this point, judging from the reactions to his statement on social media.

He’s escalated from lock her up to kill them all

Until he’s imprisoned, this dangerous psychopath will continue to incite violent acts of terrorism

Letting him roam free is a catastrophic error

Did Liz Harrington share a mafia hit order by the Don yesterday?

Other comments noted that Trump’s credibility is not assisted by his inability to get the name of the Special Counsel in the investigation correct. It’s John Durham, not Robert Durham.

With the House Select Committee on January 6th uncovering new evidence of Trump’s attempts to overturn the results of a legitimate presidential election nearly every day, the fears of eventually being convicted of treason and sedition and the accompanying potential death penalty must be weighing heavily on what’s left of Trump’s mind.

It’s likely that those fears are inspiring his calls for his opponents to suffer the same fate.