If former GOP vice-presidential candidate Sarah Palin was upset yesterday when U.S. District Court Judge Jed Rakoff ruled that her entire libel case against The New York Times should be thrown out of court because her lawyers had “failed to produce evidence that the newspaper knew what it wrote about her was false or acted recklessly towards indications it was false,” She has even more to be upset about today.

While Judge Rakoff made his ruling to dismiss Palin’s suit as meritless, he nonetheless allowed the jury to continue deliberating and to return a verdict, anticipating that the former Tea Party-affiliated Alaska governor would appeal her case to a higher court based on his ruling and preventing the self-described maverick politician from claiming that she wasn’t able to get a decision on the merits of her complaint from a jury of her peers.

Today, that jury returned their verdict, and the result is as completely negative for Palin as the judge’s unilateral dismissal of her case was yesterday.

In a unanimous decision of all nine jurors polled, the jury found The New York Times had not acted with intentional malice in publishing an editorial that erroneously connected Palin’s pro-gun political rhetoric to the mass shooting near Tucson, Arizona in 2011 that resulted in the deaths of six people and the wounding of 14 others, including then-Democratic Congresswoman Gabrielle Giffords.

NPR media correspondent David Folkenflik announced the news on Twitter and then related what Judge Rakoff told the jurors after he informed them for the first time that he had already tossed the case out based on the requirements of the law.

Rakoff informs jurors for the first time that he earlier decided to dismiss Palin's suit once they reached a verdict, because she hadn't made a sufficient case:
"You decided the facts, I decided the law; it turns out they were both in agreement, in this case."

Commentators on social media, when they weren’t making snarky comments on the deterioration of the physical appearance of the former Republican vice-presidential candidate, agreed that the judge was clever in his decision to let the jury finish its deliberations and reach a judgment in the case since it would make any appeal of his ruling that much more difficult.

It doesn't matter. They want to take it to the Supreme Court.

The goal was not to win at trial; the goal is to weaken the "actual malice" standard. There are two Justices who have publicly stated they want to do so.

Was there anything new challenged here in libel law? If not it will be unusual for SCOTUS to take the case. If they do, it will be full on legislation from the bench, something conservatives have railed against. 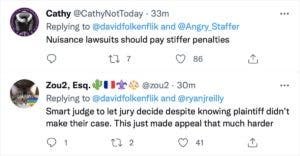 Palin is defeated for now, but with dark money flowing into Republican coffers from shadowy oligarchs looking to control the national conversation, expect that the right-wing GOP darling will be back with a well-financed round two when her attorneys file their appeal.