The International Criminal Court just announced that it’s on the case investigating Russian President Vladimir Putin for war crimes arising from his illegal invasion of Ukraine.

Karim A.A. Khan announced a pending investigation into Putin’s actions in his role as the Prosecutor for the ICC.

And the world took note.

In its 20 year history, since the Rome Statute was created and the court was ratified by 123 nations in 1998, the ICC has only issued 35 arrest warrants. Thirty of those cases have gone to trial. The case of the ICC vs. Vladimir Putin and Russia is only the 21st ever investigation conducted by the court which sits in The Hague, Netherlands. America is not a signatory.

At the request of the UN Security Council, the ICC can investigate and prosecute crimes of genocide, war crimes, and crimes of assault. The crime of aggression was added in 2018. Neither Russia nor Ukraine are state parties, but the ICC received acceptance from Ukraine of their jurisdiction after Russia’s invasion and annexation of Crimea in 2014.

Here’s a copy of the first declaration: 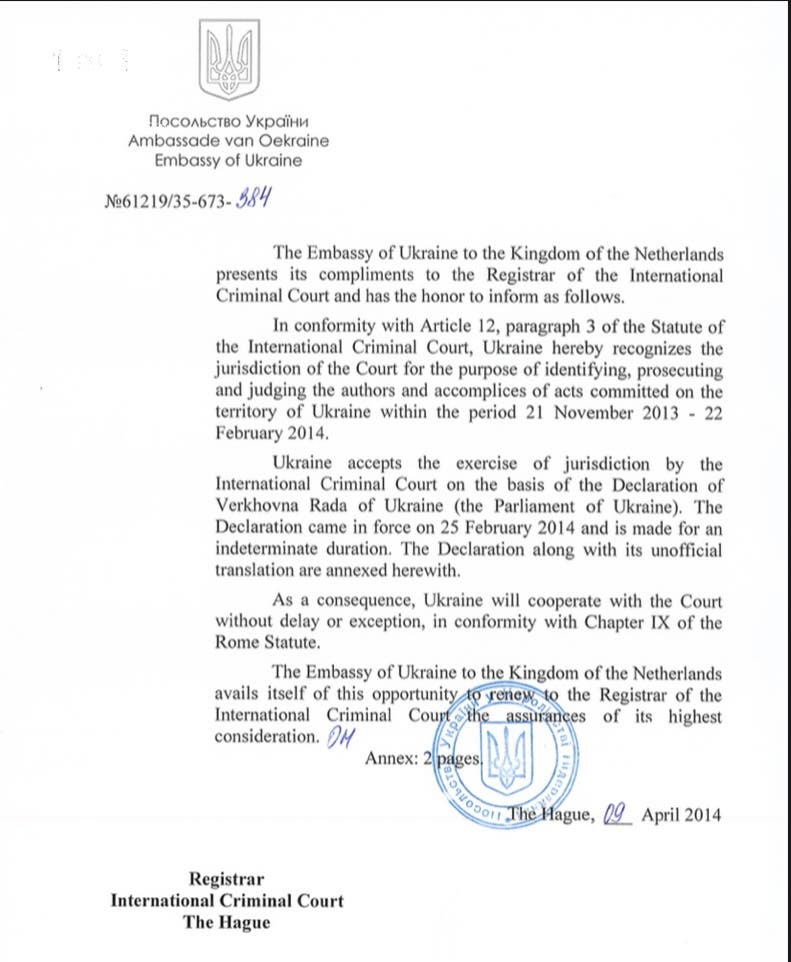 A second declaration gave the ICC open-ended jurisdiction, allowing them to proceed now.

As Russia’s assault on Ukraine intensified, Khan became increasingly concerned by Putin’s tactics and intentions like the rest of the world, enough so that Khan decided he had seen enough. He announced this via the ICC website:

“I am satisfied that there is a reasonable basis to believe that both alleged war crimes and crimes against humanity have been committed in Ukraine in relation to the events already assessed during the preliminary examination by the Office.”

“Given the expansion of the conflict in recent days,” continued Khan, “it is my intention that this investigation will also encompass any new alleged crimes falling within the jurisdiction of my Office that are committed by any party to the conflict on any part of the territory of Ukraine.”

While Putin is unquestionably already guilty of the crime of aggression, according to the ICC, they are unable to act. That action requires the approval of the UN Security Council. Russia has a permanent seat on that council. And with it, veto power.

Another concern, and potential conflict of interest, is the Vice President of the ICC is Judge Krill Gevorgian, of the Russian Federation.

Economic sanctions against Russia have been rapid and painful. The EU, US, UK, and Canada have restricted Russia’s Central Bank access to reserves. Even neutral Switzerland has joined in freezing the superpower’s accounts in retaliation for its Ukrainian invasion.

Lengthy lines for ATMs in Russia have become a new epidemic as people rush to get hard currency.

International sporting organizations from the World Cup Federation to the IOC have announced bans on Russian competitors. Even the National Hockey League which features over 100 Russian professional hockey players put out a statement condemning Putin’s invasion and ending ties with his nation.

But that hasn’t deterred Putin.

Whether Karim Khan’s announcement will affect Putin’s actions remains to be seen. But for now, at least, it appears the political, economic, and now judicial walls are closing in.

After world condemnation of Putin’s invasion of Ukraine and sanctions that saw the ruble fall to new lows, accountability on the legal front doesn’t seem far behind.

Here’s the official statement of the International Criminal Court: