UPDATE: No Justice for Breonna Taylor

Florida Governor Ron DeSantis (R) loves to talk about parental rights and their freedom to make decisions for their children unless those parents, or even students, make choices with which he disagrees.

If that wasn’t bad enough, his official misinformation office picked up the fight from the press conference to the internet space and slammed parents and kids for making their own health choices about masks, the very same kind of “parent’s choice” they’ve pretended to fight on behalf of protecting, all while dismantling covid interventions that have killed countless Floridians.

At one of his numerous press conferences in Tampa at the University of South Florida, DeSantis saw high school students wearing masks lined up behind his podium. The Republican Governor has a war against masks, which includes stripping $200 million from school districts that instituted mask requirements. And he was NOT happy to see kids wearing masks on his stage.

“You do not have to wear those masks,” DeSantis barked aggressively to the students. “Please take them off,” he continued moving his voice from commanding to whiney. “Honestly, it’s not doing anything. We’ve got to stop with this Covid theater. So, if you want to wear it, fine. But this is ridiculous!” The self absorbed 2024 GOP presidential contender ended the exchange by turning to the podium and shaking his head like a jerk before ejecting out a loud and obnoxious sigh.

Parents of these innocent high school students were understandably not happy with the Governor of the nation’s third-largest state throwing a temper tantrum while berating their children.

Parent Kevin Brown’s son was one of the few on stage to keep their masks one. When interviewed later, Brown said DeSantis had no right to tell his son and other high school students to take off their masks and said his message to the Governor is:

One student who took his mask off was asked if he did so due to feeling pressured by DeSantis. He responded, “a little.” His mother said she was very upset and thought it was shocking for DeSantis to behave that way towards her son and other high school students.

"I would tell (the governor) to stop bullying kids."

Kevin Brown says Gov. DeSantis had no right to tell his son and the other high school students to take off their masks.

His son decided to keep his mask on during the press conference at USF. https://t.co/JNYeA9dYci @WFLA pic.twitter.com/nnBTJNmfQF

Send in the clowns

The Governor’s official Minister of Propaganda Christina Pushaw, also decided that mocking the parents was a good idea. She recently faced an open scolding from the Anti-Defamation League for the second time in four months, when she spread debunked conspiracy theories about Nazi rallies in Orlando, Florida being organized by Democratic operatives.

On the post regarding one of the mothers outraged that Ron DeSantis disrespectfully ordered her son to take off his mask, Pushaw replied with an idiotic tweet that included a picture of her son and said, “when mom says no but dad says yes.” It’s a glaring example of the grossly paternalistic vision of government advanced by Republicans today. 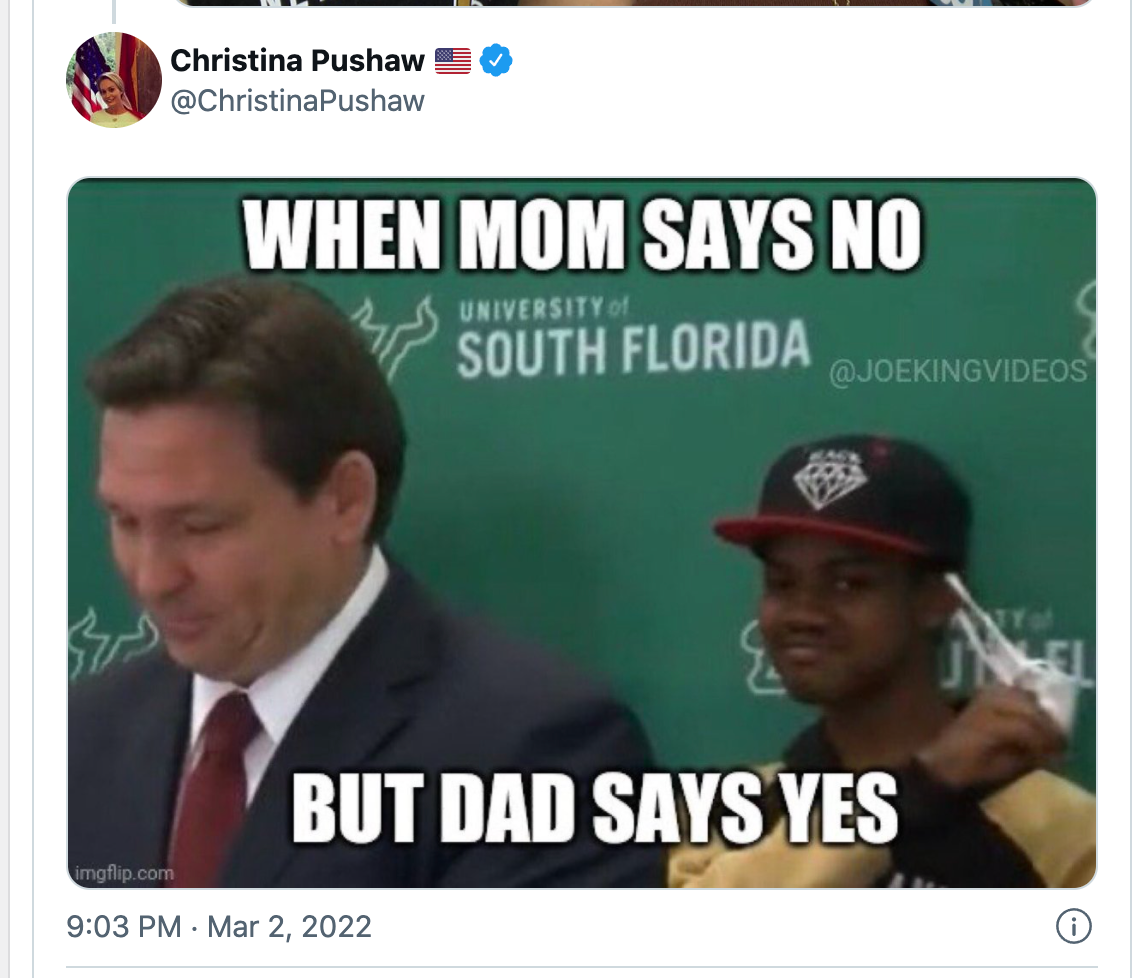 Florida’s Truth Minister later doubled down on her pushback against DeSantis’ critics, saying that “if hundreds of geriatric politicians can crowd indoors for Biden’s SOTU without masks, why should high school, and college kids wear masks?”

In Florida, parents can make decisions for their kids as long as those decisions agree with DeSantis. If not, the Governor will bully you, and his spokesperson will mock you while using pictures of your children without permission to do so.

DeSantis treated these high school students disrespectfully because he saw them as political props, and masks didn’t align with DeSantis’ politics.

Their freedom to make their own choices meant nothing to DeSantis if it meant his photo op was not to his liking.

That encapsulates what makes Ron DeSantis is such a dangerous politician with his self-serving ways, putting his political aspirations above anything else, to the point where he lacks empathy even when talking to high school students.