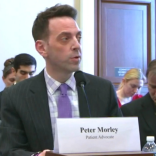 So you want to advocate in the United States Congress?

As someone who has actively advocated for the last five years and traveled from New York City to Washington, D.C. thirty-two times to meet with members of Congress to fight for more accessibility and affordability, I can tell you that advocacy works!

In December 2016, shortly after President Trump’s election, I joined Twitter and created the account @morethanmySLE with the goal of fostering awareness of men who have Lupus, as I do.

My account gave me visibility that led me to work with my U.S. Congresswoman, Rep. Carolyn Maloney (D-NY), to advocate for accessible healthcare that is affordable to people with Lupus, disabilities, and other chronic illnesses.

I want you to know that I was a very private person prior to the 2016 election. But once President Trump was elected, I realized I could no longer keep quiet. I had to, in good conscience, do something to promote healthcare advocacy and empowerment.

I recognized that meant I had to share the very personal details of my own story on social media. There are people in my life that were not aware that I see seventeen different doctors annually, take thirty-eight different medications, I survived kidney cancer, and I live with Lupus.

Many of them found out through Twitter — that’s how guarded I was.

But listening to President Trump’s campaign rhetoric to attack health care for 18 months caused me incredible stress and motivated me to speak my truth directly to Congress. Before President Obama left office, Senate Republicans had begun already to chip away severely at the Affordable Care Act aka Obamacare, on their way to an ultimately unsuccessful attempt to repeal America’s most important healthcare law. I had to act.

Whatever your issue(s) is, it is worth getting involved, it does matter, and you can make an incredible difference. Here are five ways you can advocate:

So, there you have it. You don’t have to travel to the U.S. Capitol thirty-two times and testify to Congress.

You can advocate from the comfort of your home.

And this doesn’t only apply to national issues.

This also works for your state and local governments.

I’ve been honored and humbled that due to my advocacy, I was asked to testify before three separate House Committees (my Oversight Committee hearing that I testified to made it on to C-SPAN). Advocating for better health care for all Americans has given me a purpose in my life.

Due to my health diagnoses, I literally must walk a fine line between the stress of my health and advocate, but it’s truly worth my time.

I encourage you to take a few minutes daily or weekly to call or email your representatives about issues that are important to you, it matters, and more importantly: it works! 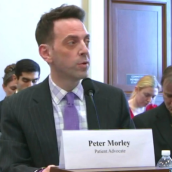