The dangers posed by electing even so-called “moderate” Republicans were reinforced today by the news that Virginia GOP Governor Glenn Youngkin just vetoed a bill that would have reduced the statute of limitations on collecting medical debt from five years to three years and provided substantial relief to consumers saddled with unexpected medical bills.

The bill that Youngkin vetoed — HB 573 — was passed unanimously by the Virginia Senate earlier this year, an amazing feat in any state legislature in today’s polarized political environment, and particularly unusual when it comes to health care policy which has been a major battleground as Republicans nation-wide still rail against the evils of Obamacare despite having proposed no feasible alternative.

Nadarius Clark, a Democratic Delegate for Virginia’s 79th District which includes Portsmouth, Norfolk, and Chesapeake, was the original sponsor of HB 573 and criticized Governor Youngkin for killing the legislation that he introduced:

“HB 573 would have granted life-altering medical debt amnesty for thousands of Virginians. In practice this means that, after three years, families can’t be sued for any medical debt–debt they often had no choice in procuring. The statute of limitations would apply to hospitals, debt collection agencies, and the Commonwealth of Virginia,” Clark asserted.

“We worked this piece of legislation through Republican leadership in both chambers and had several meaningful negotiations with the Attorney General’s office to ensure this bill satisfied the priorities of the Administration while still ensuring meaningful change for hard working Virginia families,” he continued.

“The veto today can only mean one thing: Gov. Youngkin is completely disconnected from working class people who will continue to suffer with insurmountable debt. He is being pushed and pulled around by the debt collection industry, the very people who stand to benefit when Virginians are struggling to get back on their feet in the face of a global pandemic,” Clark concluded.

According to a press release from Delegate Clark, HB 573 “is one of twenty-five bills vetoed by Governor Youngkin — more bills vetoed in the first year of governor’s term in over twenty years. All twenty-five bills were introduced by Democrats in either the House or the Senate chambers, and most received wide bipartisan support. The average bill vetoed by the governor passed the House by a vote of 83-17. “

Youngkin, who won the Virginia governor’s race last year after pivoting from his past as a relatively moderate Republican to emphasizing his opposition to teaching Critical Race Theory in Virginia schools, is proving that even GOP politicians who don’t present as initially alienating a persona as Donald Trump, for instance, can prevent progress on progressive policies in their own quiet way.

Once the news of the veto hit social media, negative comments about Governor Youngkin began to circulate furiously.

But puts out CRT propaganda that fires up the ignorant base. Terry didn’t fight back hard enough riding Obama’s coattails assuming he’d win that way. Democrats handed the republicans the governorship. Welcome to fascism Virginia! 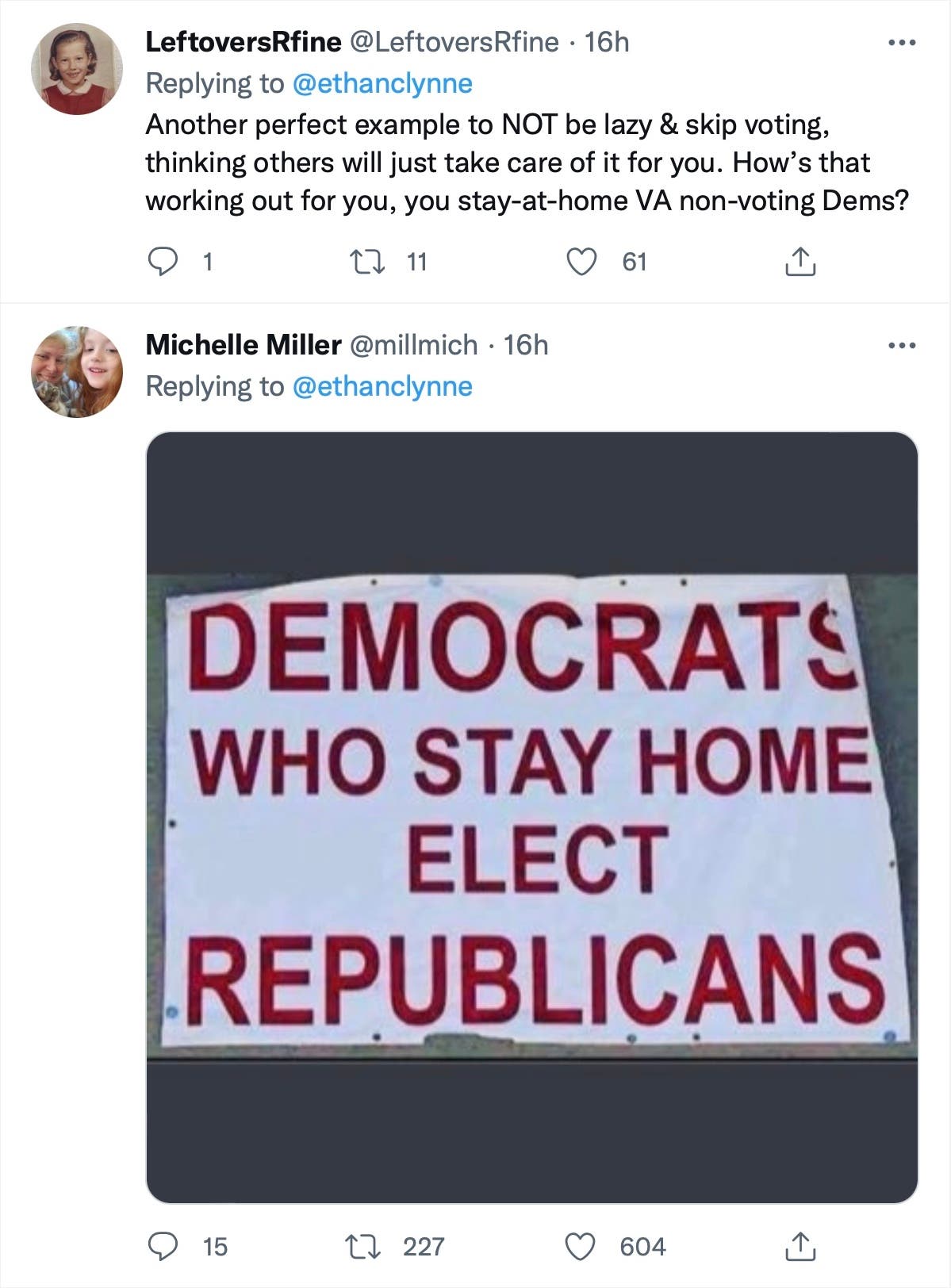 Now I voted, but we can't take fault away from the democratic party for putting up a candidate who was unable to excite voters and win them over to his side.

Isn’t the State House & Senate now controlled by rethuglicans? What the hell happened? 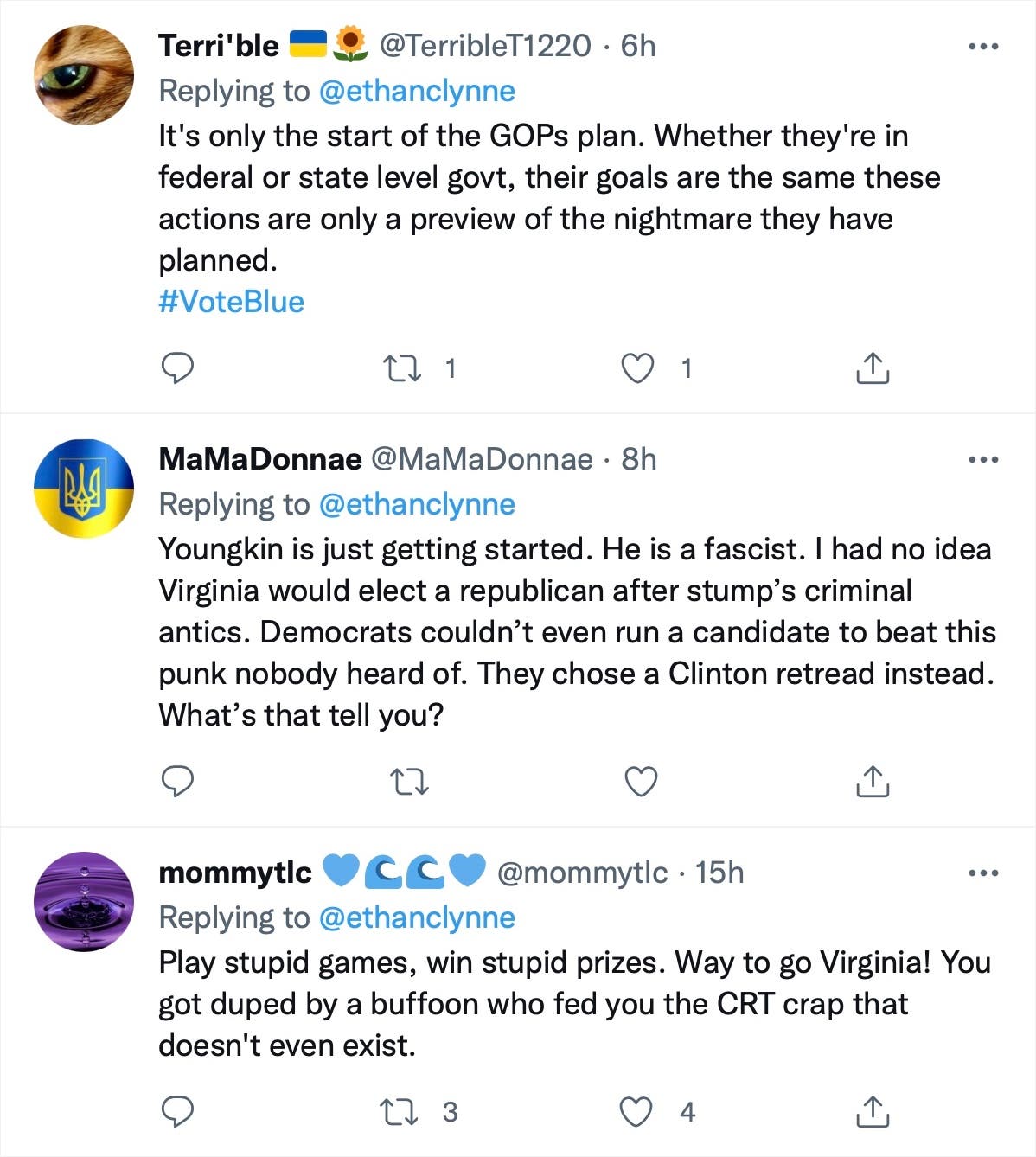 Youngkin’s record since taking office should serve as a cautionary tale for any independent voter considering supporting a moderate Republican candidate as the lesser of two evils in any given election. Take it from the Democrats who know better — no Republican can be trusted to govern in the best interests of the people whom they hope to represent.