The climate of political repression and censorship in the state of Florida has reached such an absurd fever pitch that school administrators are now telling teachers to remove those innocuous COEXIST flags and stickers.

The Sarasota Herald-Tribune reported that teachers at Booker High School were told under guidance from the Sarasota County School District to remove several items that could be deemed “political,” including a COEXIST flag that was displayed in a classroom.

What’s so offensive about the COEXIST slogan? For those who have never seen one, it consists of the word spelled out by the symbols of major religions and includes other symbols promoting tolerance of people regardless of their sexual or gender orientation. The flag displayed at Booker High School was painted in rainbow colors, which was probably the most triggering factor to the homophobes in charge of the recent wave of politically motivated censorship stemming from the state legislature. 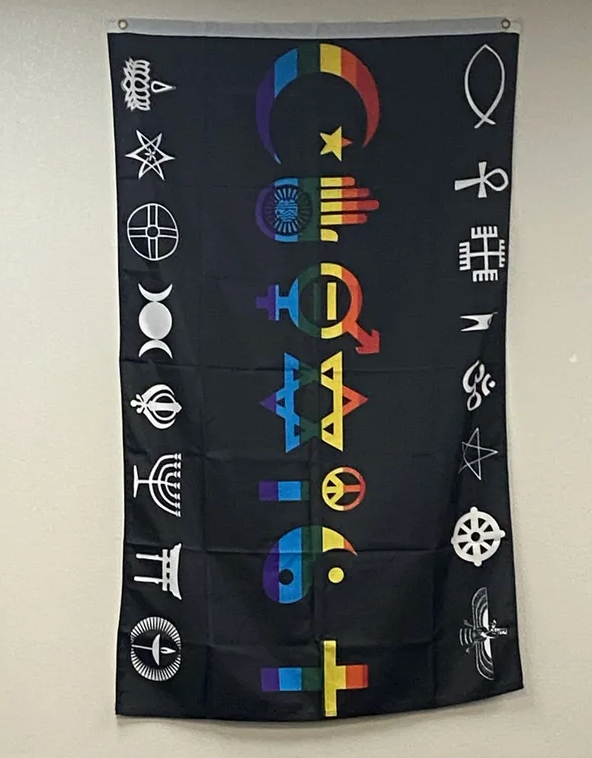 Teachers at the Sarasota school shared that administrators inspected their classrooms and asked them to remove items that could be deemed “political” from at least six of the classrooms, including the COEXIST flag, a lesbian Pride flag gifted by a student, a poster that said “Black Minds Matter,” and a Whiskey Rebellion flag, commemorating a 1794 uprising of farmers and distillers in Pennsylvania in protest of a whiskey tax enacted by the federal government.

This act of censorship in Booker High School follows news that over 50 math textbooks were rejected in Florida Public schools because they supposedly contained “Critical Race Theory” and “prohibited topics.” It has been unearthed recently that now only one publisher holds a monopoly on Florida math textbooks for classes K-5th grade and that the publisher is owned by an investment firm that Republican Governor Glenn Youngkin used to control.

Since Florida Governor Ron DeSantis signed his “STOP W.O.K.E. Act” — which would be more appropriately named the “Erase History Act” — a wave of censorship has swept schools, universities, and workplaces in the Sunshine State. Lessons about racism and the history of racism in the United States have been severely restricted.

DeSantis also recently signed into law the “Don’t Say Gay” bill. It restricts conversations about sexual and gender orientation in Florida schools, giving the Florida Department of Education broad authority to erase the identity and existence of LGBTW individuals from being discussed in public school.

These are your modern-day, so-called “small government conservatives” who are always willing to exercise state power to censor ideas they don’t like and impose their own standards on morality upon others. Limited government, indeed!

Thomas Kennedy is an elected Democratic National Committee member representing Florida and an opinion writer for Occupy Democrats. He tweets from @tomaskenn.