Michael Ray James, the Florida teacher who recently made headlines after resigning on the first day of school for what he alleges was an act of racism by a district employee – claims that were refuted by the school district – has a history of making inflammatory statements. In 2020, during the 61-year-old’s run for mayor of the small Alabama city of Sylacauga, he called for the public hanging of drug dealers with multiple arrests or convictions.

An elementary school special education teacher at the time in the nearby Coosa County, Alabama school district, James made the heavily criticized proposal a central part of his campaign platform, AL.com reported.

“Yes, I am very aware public hanging is extreme and totally not possible without Federal Approvals and not from city or state officials,” James wrote on Facebook. “Extreme yes, but definitely brings attention to this scourge on Sylacauga, Alabama and the United States of America.”

Michael Ray James, a 59-year-old special education teacher and Sylacauga mayoral candidate, has included in his platform a proposal to publicly hang drug dealers who are arrested or convicted multiple times. https://t.co/02uo41iLvX pic.twitter.com/CgokkMXvWn

James admitted his proposal would be nearly impossible to enforce and was “at odds” with the law.

In a now-deleted Facebook post, the educator wrote, “My concern has nothing to do with addicts but only Drug Dealers. I’ve watched children and entire Family units be destroyed because we’ve given up on the so-called “War on Drugs.” 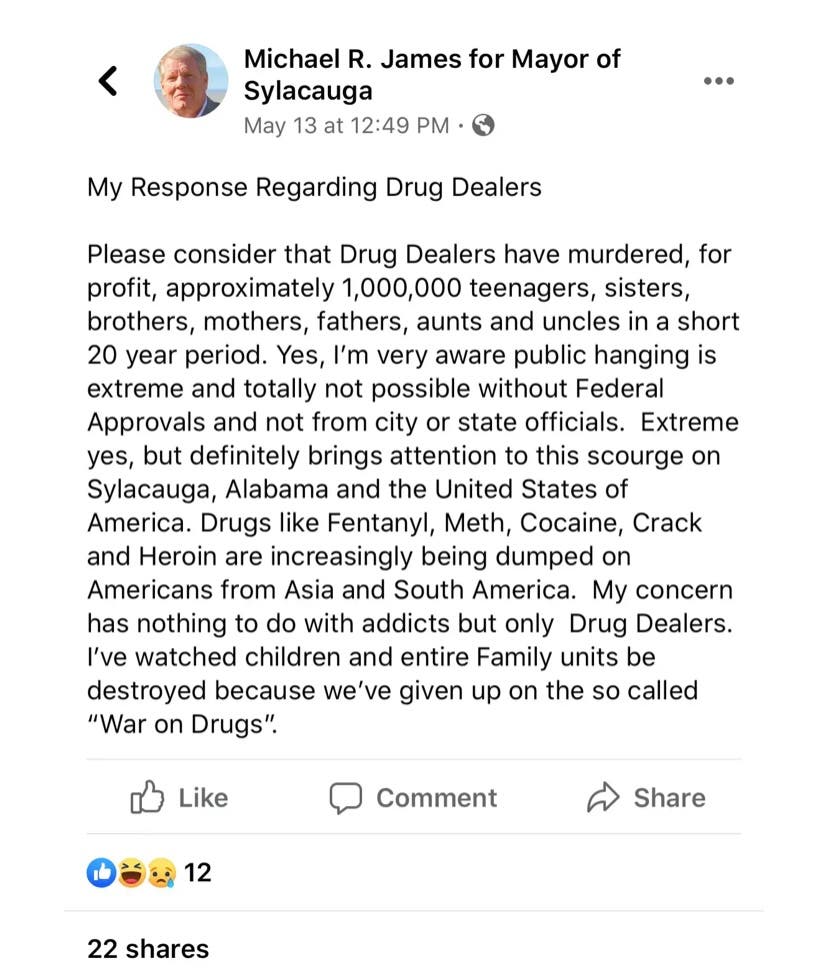 The Alabama State and Talladega County chapters of the NAACP condemned James’ remarks, calling his rhetoric “outrageous,” and “harmful to the citizens of Alabama. In a statement to The Grio:

“We know all too well the ugly history and the horrifying displays of public hangings that attracted large crowds of people who essentially watched as if they were attending a sporting event,” the chapter said. “We will NOT turn back to that dark time in OUR country. If you have been angered by the recent brazen displays of hate, join the NAACP and fight with us. It will take all of us working together to combat this level of hate because it is embedded into the fabric of this nation.”

James pushed back on the civil rights group’s criticism, making a statement published in the May 23-24 edition of The Daily Home  “What are you doing about the black-on-black crimes in all cities across the U.S. that are almost always drug-related?”

“We will not entertain a dialogue in this type of forum. Our suggestion is to join the NAACP to get more informed and enlightened,” President of the Talladega Co. NAACP, Rev. Hugh Morris, responded in a letter to the editor.

A self-described Christian, and right-to-life conservative, the former Sylacauga mayoral candidate said he doesn’t want people to think of him as a monster because he called for the public execution of drug dealers, AL.com reported. “I’m not a nut,” he said. “My biggest concern is what drugs can do to a community.”