A second-grade Florida girl was disenrolled from her private Christian school by the administration for not doing a homework assignment that asked for a picture of herself reading in the bathtub.

Action News Jax’s Meghan Moriarty reported, “She told her parents she didn’t feel comfortable doing that. Days later she was removed from the school on the administrator’s behalf.”

The assignment in question was sent home with the eight-year-old by Victory Christian Academy, which asked the elementary school student to “send a picture of you doing reading homework in the bathtub.”

Parents are supposed to sign off on homework, but parents Misty and Christopher Dunham added the note: 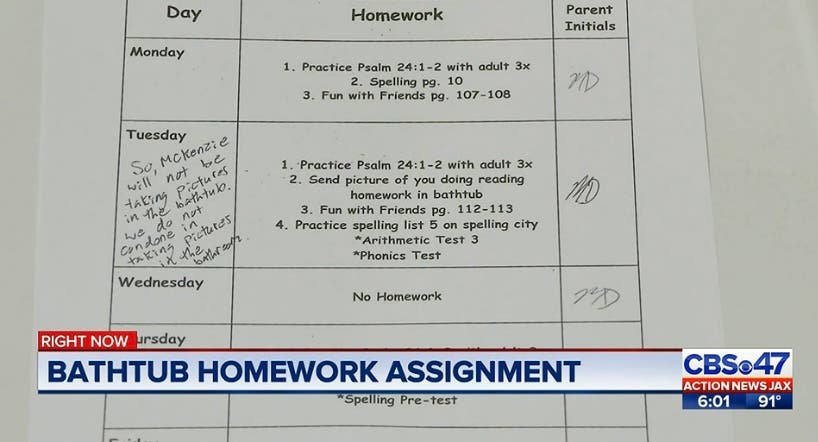 The Dunhams also emailed McKenzie’s teacher, Irene Castaneda, alerting her to their concerns and asking for context behind the vague request. According to Mrs. Dunham, it said:

Hey, you may wanna explain this. Send something out to the parents, let them know what the intentions are—this just does not sound ok.

Recently hired in August, according to records, the educator dismissively told the parent to “have fun with it,” and suggested the second grader “be in pajamas, be in uniform.”

What Castaneda wrote (according to a police report) was, “We have been sending this homework assignment home for years, and you’re the only one complaining about it. Just cover your child in pillows or pajamas then,” Only Sky Media reported.

“If the goal was to have a little fun with the reading homework by having Victory Christian Academy parents take a picture of their kids reading in the bathtub with clothes on and no running water, that should’ve been specified. It wasn’t. When Dunham spoke with other parents about the situation, they were equally flippant, saying things like ‘Just cover your child up with something.’”

Mr. and Mrs. Dunham contacted the school administration, and local authorities to document the incident – shortly after, the parents were told to withdraw their daughter from the school. They refused. They were advised by an administrator that it wasn’t a suggestion, and they would proceed with dis-enrollment on the school’s end.

“(He said) ‘I think you guys should do a parental withdrawal for the child.’ I said, ‘I can’t. I can’t do that. We refuse to withdraw her,’” Misty Dunham said. “He said, ‘OK thank you for saying that,’ and continued on saying that, ‘Well, we’re going to proceed with an administration withdraw.’”

Picture of withdrawal slip picked up by parents on Wednesday, September 22.

“We have been sending this homework assignment home for years, and you’re the only one complaining about it.”

In a statement to Action Jax News, Victory Christian Academy’s, Pastor Jesse Latta, asserts the assignment was “innocent,” and goes on to say that “out of an abundance of caution and for there to be no misunderstandings, our administration has removed this particular assignment for any future use.”

“There was an assignment given, as I understand you have received a copy. It was taken out of an online teacher resource and has been used in many schools,” Latta wrote. “There were certainly no bad intentions with this assignment. When a parent contacted our teacher with a complaint, our teacher immediately sent out correspondence to all parents in the class to assure them that there were no bad intentions with this assignment and to clarify the guidelines. No additional concerns were presented to the teacher.

“While the assignment was completely innocent, out of an abundance of caution and for there to be no misunderstandings, our administration has removed this particular assignment for any future use,” Latta added. “We value our children and their safety is our top priority. We will continue to serve the children and families in which the Lord has graciously allowed us to have a part in their lives.”

In light of the school’s removal of the controversial assignment, they refused to answer when asked about the current enrollment status of eight-year-old McKenzie Dunham.

The school’s decision sets a dangerous precedent for the ability of children to speak up when they have concerns. McKenzie’s father, Christopher Dunham told reporters, “She did something right by telling mom and dad about something she wasn’t comfortable with something, and now she is no longer in school over it.”

Original reporting by John Bachman and Meghan Moriarty at WJAX.