You can add “birth control” to the miles-long list of things that Herschel Walker doesn’t understand.

Aside from fathering a still-uncertain number of kids that he officially acknowledges, yet another woman has now come forward to claim that Walker paid for her to get an abortion. I think that’s five abortions we know of, but it’s still early as I’m writing this. By the end of the day, who knows how many more there might be? 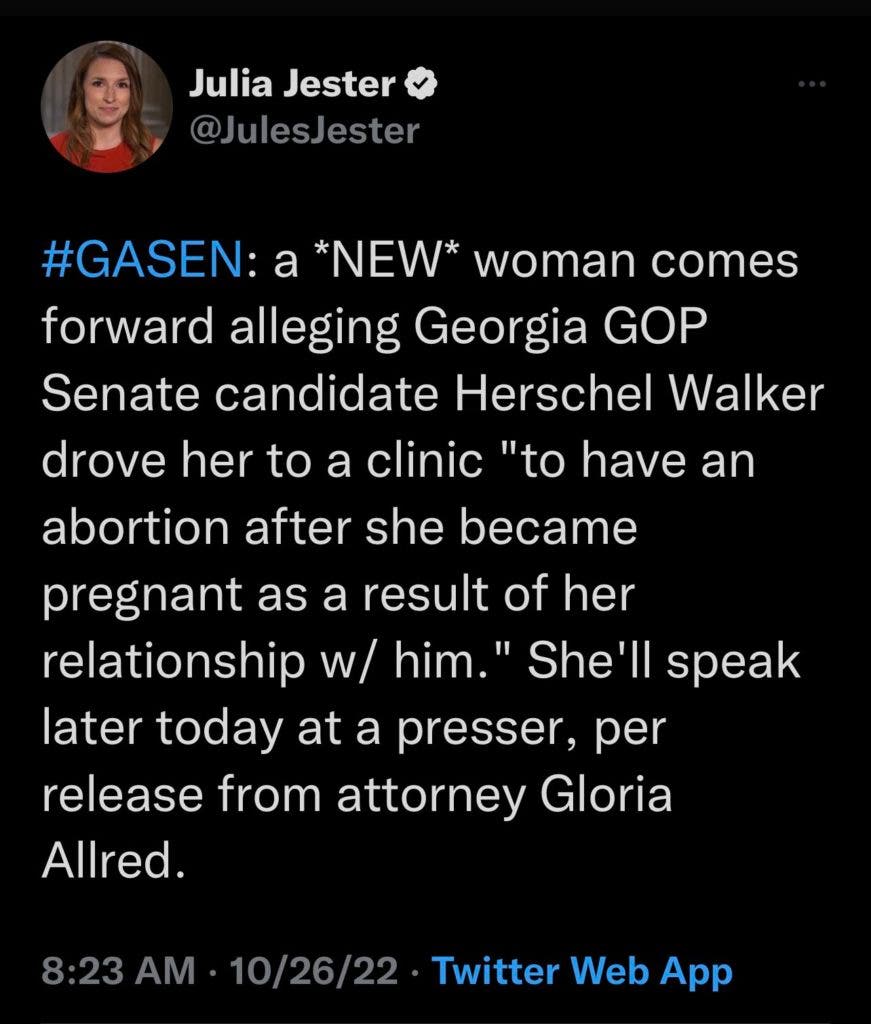 The MAGA hypocrisy–Trumpocrisy, if you will, is really burning white hot these days. Honestly, “GOP” could stand for a lot of things, but right now it’s God Awful Projection. You want to win, I get it, but if your party platform is “abortion is murder” yet you look the other way at a candidate’s history of paying for abortions because he used to play a sportsball, you suck bigly.

Attorney Gloria Allred issues press release: a news conference to be held later today with a previously uninvolved woman who says Herschel Walker drove her to a clinic to abort their pregnancy. pic.twitter.com/bX36t1rXRi

Walker has said he is in favor of a total abortion ban, yet in his debate with his Democratic opponent Sen. Raphael Warnock (a REVEREND. Who inherited MLK’s pulpit, has government experience, and has yet to reveal any secret children or abortions), Walker tried to deny being in favor of an outright abortion ban and attacked Warnock for being a Baptist pastor but supporting abortion rights. Ok, Deputy Dawg.

Thankfully, the Reverend is leading the liar with a traumatic brain injury by three whole points (hey, that’s a field goal, right? I don’t know sportsballs, but I think that’s right) and hopefully more Georgia voters will decide it’s more important to vote for a good guy instead of a bad guy.

If Republicans believed abortion is murder, they would not support Herschel Walker.

They say abortion is murder to divide and they use it to win elections. Republicans get abortions, too. They just lie about it.

We need to stop pushing the idea they believe their own BS.

While the Walker campaign will do all it can to negate this latest revelation, the truth is that their guy paid for abortions and it’s time to stop lying about it. He’s one of the most flawed candidates in American history, and the future of our democracy isn’t a joke. Please vote for smart people.

🔥WATCH: “The GOP is a party of hypocrisy.” @KrisLKnight takes apart a MAGA apologist on @NewsNation – pointing out they claim to be anti-abortion yet support Herschel Walker who allegedly paid for abortions, and @TNGOP Rep. @DesJarlaisTN04 too. 👀 pic.twitter.com/wzV2pKlcLA

Tara Dublin
Tara is a reported opinion columnist at Occupy Democrats. She's a woefully underappreciated and unrepresented writer currently shopping for a super cool novel that has nothing to do with politics while also fighting fascism on a daily. Follow her on Twitter @taradublinrocks
Latest Posts
Tags
abortion Georgia Senate race Herschel Walker Raphael Warnock